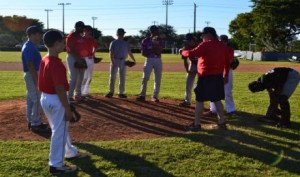 The Crusaders went a remarkable 23-6 in 2014. They made it all the way to the state semifinals and had players finish the year among the best in almost every hitting and pitching category countywide. Fast forward to the present: the Crusaders will only be returning four players from that team and they will have a new man at the helm due to former Manager Matt Cleveland departing to coach upstate.

Despite all of this, the Crusaders refuse to give up on what has made them a great program: tradition. Because, as new Manager Steve Carp has been reminding his players every day, “tradition doesn’t graduate.”

“We have a certain standard that we believe in,” Carp said. “What coach Cleveland did and what I’ve done in the past.”

One tradition that has not left Carp personally and, in turn, will not leave the Crusaders this year is great coaching. After playing professional ball in the mid-late ’70s, Carp began coaching and, in his early days, coached alongside Tommy John. Among his countless career highlights as a coaching staff member, he has coached the likes of Luke Jackson, Josh Pressley, Anthony Rizzo, and several more of South Florida’s greatest exports.

“I’ve been dormant as a head coach for a while but wherever I’ve been I’ve always won,” said Carp. “I have a good track record and I’m proud of it. But this is a new year.”

This year, Carp will hold down a head coaching gig for the first time since 2007. Despite his past accomplishments, he admits it has taken some getting used to, and lauds the rest of his coaching staff for aiding him in his journey thus far.

“I had to get used to it again where everything falls on you: from getting kids in, taking care of whatever problems that arise, equipment, scheduling, whatever the need is from a parent, a kid. It’s much different; a lot more work,” said Carp. “I have great coaches, though. I hired Steve DiMattes who has a lot of coaching experience. He has been a big help; a godsend, really. So have Coach Murto and Coach Apai, a couple college level guys I brought in to join the force. They have taken a lot of the burden off of me.”

When it came to filling holes left by the eleven departures this off-season, Carp had a lot of work to do. He did so effectively and creatively. Some of the greatest hits were Jordan Sabates and Kevin Gutierrez. Sabates is a third baseman and a pitcher who got caught in a numbers’ crunch at Pembroke Pines Charter, and he has affectionately earned the nickname ‘Porciento’, meaning 100% all the time. He is a stocky line drive hitter who displays good range to both sides at third, a powerful right arm, and a great team mentality. Carp expects Porciento to be one of the team’s leaders this year.

With the exit of ace Touki Toussaint, Carp was in search of a guy who could hopefully head his pitching staff. Enter Kevin Gutierrez, a 6’3″, 174 pound right hander. Carp admits Gutierrez’s mechanics were a bit off when he first arrived but he has since improved greatly.

“When he first came to us, his mechanics were a bit bunchy for a big, long guy,” Carp said. “We’ve worked with him on that. He’s become a lot more consistent.” 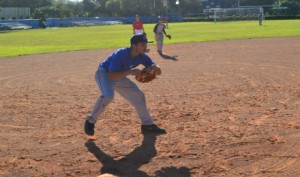 Jordan Sabates prepares to field a ground ball at third base.

Two of the Crusaders’ four holdovers, Kyle Catrice and Ethan Hochhauser head up the middle of their infield. Carp describes Catrice as a very heady player that is mature for his age and the leader of the infield. Hochhauser is a short stocky kid who displays great mechanics in the infield and, despite his frame, stays back phenomenally on the ball to drive it to all fields.

When asked how eager he is to finally get the season started after a long, strenuous, busy off-season behind the scenes, Carp’s face lights up.

“I’m more excited than I’ve ever been because sometimes when kids are good and they know it, there’s only so much you can teach them,” he said. “These kids are sponges. They want to learn. There’s a lot of respect, the camaraderie is good, the chemistry is good, the hustle effort and intensity is all good. That’s important in growth.”

Carp has reason to be excited. According to Catrice, he stepped in to the perfect situation: heading a young team that is eager to learn from him and improve.

“Coach Cleveland was a more fundamental guy. He was better at polishing players who are already there,” said Catrice. “Coach Carp is a very good teacher; great to have at the high school level.”

While Coach Carp expects his young squad to go through some understandable growing pains, he also expects a good showing this year due to their natural talent.

“We are young but it’s not like we are raw,” Carp says. “I expect us to have our experience challenges. But these kids aren’t all rookies; they’re just young.” 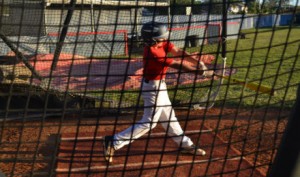 One player who will undoubtedly have his ears wide open whenever Coach Carp or his elders talk is Cameron Kohl, a seventh grader, who remarkably made the team with a great showing in tryouts and practice. A swing player who can fill roles in both the infield, outfield and on the mound, Kohl is ecstatic about the opportunity to get his high school career started early.

“I feel really good and confident in myself,” said Kohl. “It makes me want to work hard and strive for the next goal.”

Carp will approach every game with the same message and the same instruction. When it comes to how he will approach each game, whether it be with a young squad, a veteran one, or anything in between, and whether it be in next month’s Colts’ First Pitch Classic versus Wellington, the five in district games that take place after that, or any other matchup this season, Carp will stick to tradition. He plays the same brand of baseball, no matter who is on the other side of the field.

“I go after each game the same way,” Carp said. “We have a certain way we play and that’s how we are going to play. I don’t really put any emphasis on one game or another. What I put emphasis on is their effort, their intensity, the respect that they give, and what kind of energy they give us that day. That’s what I’m looking for: to get better. I’m not really worried about the game itself. Each game to me is the same.”

Due to all of their departures and the introduction of a skipper, the Crusaders do not believe the rest of the South Florida baseball community views them as a serious threat this season. According to Jordan Sabates, this has lit a fire under the team.

“We have our heads up high and a good motive to strive forward,” Sabates said. “No matter what, there’s always another play, always another game. You just have to keep improving.”