Written by Anthony Uttariello on May 20th, 2011 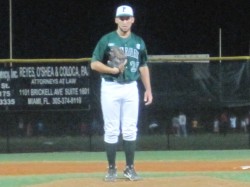 Flanagan’s Mike Melendez is the District 12-6A Player of the Year.

When we visited Flanagan before the season started, Falcons Head Coach Ray Evans knew he had a strong enough offense to win another district and state title. What concerned Evans was who was going to step up on the mound. That question was answered early and often, every time Evans gave the ball to Mike Melendez.

The senior not only starred for the Falcons on the mound, but he also was the team’s three hitter this season. Melendez was the ultimate combination of offensive and pitching prowess, and he parlayed success at first base and on the mound into a District 12-6A Player of the Year award.

“Mike was our MVP this year,” said Evans. “He was our horse on the mound, our go-to guy. He pitched every big game there was for us, and did an outstanding job being our number one. He also had a very good year at the plate, hitting in the three hole, and being able to drive in runs while hitting the long ball as well.”

Melendez finished the season with an 8-3 record and a 1.69 ERA. At the plate, the Falcons senior hit .408, adding six home runs and twenty-eight RBIs.

Mike Emigh gave Flanagan two of the three pitchers on the all-district team. Emigh went 7-0, with a 1.66 ERA. The junior added forty-seven strikeouts, and will likely be called on to become the ace next season.

Ryan Lindsay from Western came on strong as the season progressed, and he closes out the all-district pitching staff. Lindsay had three wins and three saves to go with his 2.79 ERA.

The infield is comprised mostly of Falcons and Bobcats. West Broward’s Mark McGinnity is the first baseman, with teammate Mike Mordente at second. McGinnity and Mordente hit .417 and .397, respectively. Kyle Harrington from Western is the catcher on the 12-6A squad. Harrington had a .500 on-base percentage and seven extra base hits for the Wildcats.

The left side of the infield belonged to the Falcons. At short, Ricky Santiago scored forty-one runs, had eleven stolen bases, and added eleven doubles for good measure. Junior Andres Sanchez broke the county record for home runs with seventeen. Sanchez hit .500 and drove in fifty-one runs for Flanagan.

The final two Falcons on the team reside in the outfield. Robert Collin and his .421 average, joins Danny Zardon, with his thirty-one RBIs. The third member of the outfield, Doug Futch, comes from the Wildcats. Futch hit .434, with thirteen doubles.

A pair of Cypress bay players round out this year’s 12-6A team. Steven Reznyk makes the team as a utility player, and Robert Macneal is the designated hitter. Reznyk hit .475 and drove in twenty-one runs, while Macneal bettered his teammate by ten points in average. Macneal also added twenty-five runs and eleven stolen bases.