In A District Of Studs, Michael Pierson Is District 14-3A Player Of The Year

Written by Anthony Uttariello on May 23rd, 2011 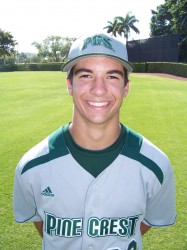 Pine Crest senior Michael Pierson is the 2011 District 14-3A Player of the Year.

For anyone that has followed Broward County high school baseball this season, District 14-3A is the standard by which other districts were judged. With five teams that all could compete on any given night, there was no shortage of candidates for the district player of the year award.

In a district loaded with offensive firepower, one player stood out amongst his peers. Michael Pierson hit fifty points higher than any other batter in the district, and the .551 average was only the start of his gaudy numbers. With a combination of speed, discipline at the plate, and power, Pierson has been voted the District 14-3A Player of the Year.

In addition to his .551 average, Pierson was on-base nearly seventy percent of the time he went to the plate. Driving in runs was no problem for the Pine Crest shortstop, who ammassed twenty-seven RBIs on the season. The power numbers were there as well, as Pierson hit eight doubles and added eight home runs. If it was speed that was needed, Pierson provided that with nine stolen bases and forty-one runs.

“Michael possesed a powerful bat, a strong, reliable arm, impressive quickness, and a reliable glove,” said Pine Crest Head Coach Glen Pierson, who is also Michael’s father. “His tireless work ethic, on the practice field and in the batting cages, together with his competitive fire, inspired his teammates and his coaches. He has a true passion for the game of baseball.”

The Pine Crest offense was one of the best in the county this season, and several players made the All-District team on the strength of their offensive production. First baseman Zach Kessinger was third in the district in hitting at .472. Kessinger drove in forty-two runs and hit fifteen doubles, to go along with eight home runs.

At the hot corner, Ben Arkin got the nod, hitting .403, with eight homers and thirty-seven RBIs.

North Broward Prep was a team that came together as the season wore on and found themselves as regional champions and state final four participants. The team success has caused the Eagles to gain much exposure this year, and that exposure was reflected in the All-District voting.

Second baseman Kevin Fagan represents NBP in the District 14-3A infield. Fagan hit .395, and drew thirty-one walks from the leadoff spot for the Eagles. His patience at the plate carried Fagan to a .555 on-base percentage.

In the outfield, Justin Bard’s nine home runs, thirty-ne RBIs, and twenty-nine runs were enough to earn him a spot on the All-District squad. Two other Eagles, first baseman Mike Vigliarolo and catcher Christian Correa made the team in the designated hitter and utility spots. Vigliarolo had an exceptional season, hitting ten home runs and driving in a district-leading forty-seven runs. Correa added eleven homers and thirty-two RBIs.

On the mound, Josean Lazaro was the North Broward Prep horse all season long. Lazaro led the district in wins (7) and strikeouts (101), while pitching the Eagles through the regional-semi finals against American Heritage and regional finals versus Gulliver Prep.

District champion Heritage was also well represented on the 14-3A team. Catcher Brandon Sedell was second in the district with a .494 batting average. Sedell hit ten home runs, drove in thirty-four, and scored thirty for the district champs. Brandon Diaz was a duel threat for the Patriots, with thirteen stolen bases and six home runs. Diaz added thirty-four runs on the season. Shrotstop Brandon Lopez was fourth in the district with a .456 average, and stole eleven bases. Esteban Puerta hit thirteen home runs, earning a utility spot on the team.

Coral Springs Charter won sixteen games this season, and do so on the strength of two All-District players. Sophomore Christian Khawly should be terrorizing pitchers in Broward for the next two years. Khawly hit .427, with sixteen extra base hits. The Panthers outfielder also chipped in with twenty RBIs and twenty-four runs.

Colton Rogers closes out the 2011 14-3A team as a utility player. Rogers was the ultimate util;ity man for CS Charter. At the plate the junior hit .432, with eight doubles. On the mound, Rogers was a 4-1 with a 2.90 ERA. The biggest contribution from Rogers came at the end of Panthers wins when the junior picked up six saves.