Written by Anthony Uttariello on May 31st, 2011 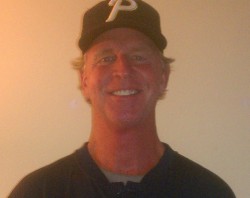 Coach George Petik announced his retirement from Head Coaching after the 2011 season, finishing his career with a 405-200-2 record. He won a state championship with Cardinal Gibbons in 1987. Petik won his 400th game this season, as well, he lost his 200th on his last game of the year with Pompano.

Coach Petik sat down with us after the season for an interview that turned out to be revealing, and at some points controversial.

This is Part 1 of a 3 Part Interview

Anthony: How difficult was it making this decision to walk away from head coaching?

Coach Petik: (Laughing) Not very difficult. As I’ve told you before, I have a daughter that is a senior in high school, she’s getting ready to go to college and play, and she’s getting a scholarship to play softball. I have another daughter that swims and she’s a pretty good swimmer. I saw one softball game this year, I saw one swim meet, the daughter that swims also plays water polo and she made the All-County first team as a goalie. Yeah, I want to see my kids. I’ve done for other people’s children all these years, now I’ve gotta be a little bit selfish and do a little bit for my kids.

Anthony: It’s interesting you say that because my brother was telling me that when he played for you in 1993 at Cardinal Gibbons, one of your catch lines with them was once my kids are born, I’m outta here, so we gotta do it this year.

Coach Petik: Well, One is 18 and the other is 17, so we extended that a little bit, yeah, he’s right I remember that.

Anthony: How did your players and parents take it? And was it something they knew all season long?

Coach Petik: Let’s first go back a little bit. I was at Gibbons, and when I tried to retire, Pat McQuaid, who’s my dear friend, and we used to battle back and forth, Pat called me and goes, ‘George you can’t retire. You can’t retire, I’m not gonna let you retire. You come and help me, be my hitting coach, work with my catchers, and you can come when you want. You know, come a couple days a week to practice, we’ll work the schedule when you can come.’

Well, he didn’t know me that well, because I can’t just come a couple of days a week, and then not go to a game. You know well. It’s couple days, then its three days, then its four days, then its five, and then you know Pat, I’m not going to work with these guys all week long and then not come to the game. So I ended up spending as much, if not more time as Pat’s assistant, as I was as the Head Coach at Gibbons, and the reason for that was, travel.

I was teaching at Dania Elementary when I left Gibbons, obviously Dania, Stirling and US1, go out to Davie, they start practice at 4:30 – 4:45 and go till who knows, I’m thinkin 8 or 9 o’clock and go all the way back, now I live by Holy Cross Hospital, so I’m there for three and a half seasons. Tiny Dixon was the AD (Athletic Director) over at Pompano High at that time, called me and asked me if I would come over there and start, resurrect, whatever, their baseball program

Ah, I came over there, looked at a couple of games and said, ‘Holy Smokes, this is a mess. They need a lot of help.’ So, I go back to Pat and ask him if I should take the job, and he goes, “Well George, I think they need ya a whole lot more than we do.” And he was right, because we (Nova) won our second state championship that year.

So on Monday night I’m telling the Nova kids good-bye, Tuesday I go to Pompano and practice in the old stadium and we had 9 or 10 kids and we finished out the season. Then the following year I got a teaching job over there and I told the principal at that time I’ll give you four seasons. Four? “Why four, coach?” That’s the time it will take me to train a kid from 9th grade through 12th grade.

Did that for two years, then Steve had some challenges, complications, with a kid and some parents, and they asked him to sit out a year, and I thought I was going to be on a hiring committee, and I thought they wanted me to help them find the coach, cause they interviewed a lot of people, and then finally they called me and said, ‘We want you to be the coach.’ And I gave them every single reason why it wouldn’t have been a good idea and every single reason I gave them, they came back with how they could make it work.

So I said ok, you’ve got me; you’ve got me for a year. And here we are. And this group of kids, I said to somebody else, this year at Pompano, was the best group of kids that I’ve ever had at Pompano as far as self-discipline and the ability to take a practice plan and go to work with and not, you know, didn’t need somebody on their case all the time.

You know Gibbons and Nova, well that was a different story, we had so much success and we had so many players going to college and play ball, Pompano has always been a challenge for a lot of different reasons, but this was a fun year at Pompano.

Anthony: You mentioned Pompano, Gibbons, and Nova. What are some of the biggest differences you see between the private and public school programs?

Coach Petik: One is you can get kids into the private school programs. If somebody can pay the tuition, and the academics are ok, they’re in. At Pompano it’s a lottery system. And the kids that apply, they have to have two 3’s on the FCAT just to apply. And it’s a legitimate lottery where, for example, my daughter applied, she had to go through the lottery, she was put on a waiting list and I was teaching there at the time. So it’s tough to get them in.

They have to maintain a 2.5, well for some kids that’s pretty tough, especially when they’re taking AP courses and all the challenging courses, they’ll kick them out if they don’t maintain a 2.5 GPA.

Pompano is a four-day-a-week school, Monday- Thursday. The only public school in the county to do that, they go from 7 in the morning until 3 in the afternoon. Two hour blocks. And I know personally for me, it’s a bear. Let’s say you’ve got a night game at American Heritage at 7:00. Game goes on, eight, nine, maybe you get out of Heritage at 9:30 or 10, then you gotta drive all the way back to Pompano and maybe you live in Coral Springs or Deerfield. It’s Midnight. And that first block teacher couldn’t care less that you were out representing your school, all they care about is you have your work in, it’s very challenging.

And you think Friday’s great, well, it’s tough, because Pompano doesn’t have their own baseball facility, we use the city complex. Well Friday morning, which is when most people would have practice, there’s a senior league over there, there’s camps over there, you don’t have exclusive use of the facility. Which in one respect, I don’t have to take care of it and go out and cut the grass and do striping and all that, but you don’t get it when you want it. It’s a challenge.

At Gibbons, I did all that stuff. You know, I cut the grass, I weeded, I was on the track doing the lawn mower. In fact the PE kids I taught used to joke, because they would sit in the stands and one kid would be on the edger and one kid would be on the drag and if you just do work in Petik’s class, you’ll get a good grade. You know, which isn’t the greatest PE program either. It was a one man operation over there, but we were able to get athletes in.

We established a reputation early on, where kids and their parents WANTED to come to Gibbons and you know Pat at Nova, he’s golden, everybody wants to go there and play. Pat has got forty kids on a roster. You know we didn’t carry that many at Gibbons, but we had thirty to thirty-five, between two teams. At Pompano we carried twenty-five kids this year, both teams, varsity and junior varsity.

So you had four kids that played JV exclusively, and then the kids that didn’t start on the varsity, played varsity and JV, which worked out and I liked that. The reason is, those younger kids, they practiced right alongside the senior or junior starting, and things that maybe they learned from another student or another player, they did, instead of the having to worry about the pressure of trying to please the coach. So you know, it was a lot of challenges.

Getting back to the question, talent level is the biggest difference.

Anthony: You’ve mentioned Coach McQuaid, are there others you’ve kind of looked up to over the years or developed a good bond with?

Coach Petik: Sure. Well, I’ll tell ya, I was an assistant at Okeechobee High School, before coming to Broward County and coming to Gibbons, and my head coach at Okeechobee, Tim Gillis. Tim was the best! You know tough, little guy, he had a Napoleon complex, but disciplined and structured. And organized and I learned a lot from coach Gillis. And then when I went to Gibbons, I applied a lot of that.

Eddie Waters is another buddy of mine, over at St. Thomas. And we would work camps we would work Pat’s camp in the summer and work various camps and we would just sit there and throw stuff off each other. Oh, how do you do this? Especially Eddie and I, we talk hitting all the time. But those two guys are, they’re among some of my better, I call them friends, cause the young guys are a little bit different.

We battled each other in the games, but we had a mutual respect and we would go out and we would have a beer and we would talk baseball afterwards. Young guys right now, it’s pretty cut throat. You know,our players played for each other in the summer, in fact I was an assistant on the Pompano American Legions Team, and that team was made up of Nova, Cardinal Gibbons, and St. Thomas kids. And we had a powerhouse team. And the kids would attend each others coach’s camps. No problem, we encourage that.

Now, oh, it’s different, you can’t go here, you can’t go there, you’re my kid. Travel ball, summer ball, it’s a lot greater influence now. And I think the kids get more exposure, obviously, because those are all star teams. I may have one kid that may be a prospect and a travel team may have five, six, seven. Maybe more so, I think that changed high school baseball, especially in this area.