Written by Anthony Uttariello on May 13th, 2011 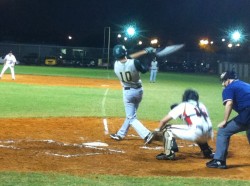 George Gugino is the District 16-5A Player of the Year.

On a team that was loaded with pitching depth, Nova Titans shortstop George Gugino may have been the most important piece to the puzzle for the Titans coming into this season. Gugino was the starting shortstop, and did everything a coach could ask for on a baseball field.

The Titans senior is the District 16-5A Player of the Year, amassing an impressive resume that included not only strong offensive stats, but showing a defensive prowess as well. The all-around play is something that Nova Head Coach Pat McQuaid appreciated.

“George is a great all around player,” said McQuaid. “He plays good defense, runs well, and he can hit for power. He’s a five-tool switch hitter who works hard in practice and he leads by his actions. Other players look up to him, and he has the potential to reach his goal of playing in the big leagues.”

Gugino, a member of the BHSB 5A-6A Senior All-Star team, finished his final year at Nova with a .415 batting average. The shortstop also had five home runs, six doubles, and seven stolen bases, while reaching base over fifty percent of the time.

Joining Gugino on the All-District team from Nova were four of his teammates. Skylar Fox was named the first baseman on the strength of his .421 average. Zach Kleiman added his .429 average and .585 on-base percentage to the All District outfield. The Titans had two pitchers make the squad, Ronny Patella, with his 0.80 ERA and 61/8 K/BB ratio, and Troy Massero, who went 4-0, with a minuscule 0.78 ERA.

St. Thomas added five players of their own to the All-District team. Second baseman Ryan Reyes led the district in hitting at .487. Reyes also added three home runs. Matt Franco received a nod in the outfield, hitting .387, while adding twenty-six RBIs for the Raiders. Austin Barron is the designated hitter, batting .391, and Jake Rudock holds down a utility spot with his sixteen runs and twelve RBIs.

Alec Byrd is the Raiders lone representative on the mound, posting forty-two Ks in 30.2 innings.