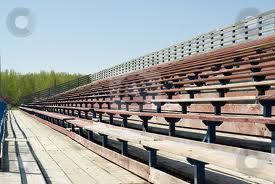 Empty bleachers are becoming all too common for some Broward teams.

Mat Latos has not forgotten where he is from.

But sometimes these days, it may seem like he is the only one.

The current San Diego Padres’ stud pitcher once called Coconut Creek his home, and although even in those days the Cougars were not a powerful state contender, they were a program not to be overlooked.

Unfortunately, the school is one of many that simply struggles to give their squad the same advantages that most of Broward County’s teams enjoy. They don’t all have the unique advantage of having a Major League Baseball alumnus who volunteers to help the team afford something like a spring tournament in Fernandina Beach. Some don’t have any support functions at all.

Broward County has enjoyed many state champions over the past several years, all excellent programs that earned what they worked so hard for. But not every team has the ability and support to develop such talented teams. There are many differences between these programs, more then should be counted. Yet there is one glaring similarity that links every team across the county –- the kids who show up are there because they want to play. Winning is great, of course it is. But there is one thing that is even greater than winning, and that is simply playing the game.

“The emphasis is to have as much fun as possible with it,” said Dillard coach Daniel Lozinsky, who will enter his fifth season at the helm this spring. “It can be difficult against teams who are loaded with scholarship players and future pro players when you’re just focusing on the fundamentals. But it’s not always about winning and losing; at least they understand camaraderie and teamwork.”

Do not think for one second that players from teams like Nova and Flanagan would not love it if they had a toe-to-toe battle with Dillard or Ely.

The big similarities for most of the county’s less-successful schools are they are lacking the support systems that they used to enjoy. Coconut Creek has watched its numbers thin as new schools opened in the area, and Dillard lost its feeder program when little league was taken out of nearby Carter Park. Meanwhile, at Ely, the community does not push the game of baseball.

“The kids don’t see baseball as a sport,” said Ely Athletic Director Rojesterman Farris, who previously coached the Tiger’s baseball team for two seasons before accepting the AD position. “Their focus is mainly on football, basketball and track. So 98 percent of the team has no experience, and it has really no chance.”

But there are players who show up, who want to play, who believe they can play, who are willing to put in the work and give it their best. These kids may even want it more than most. They have to endure constant harassment from classmates, while accepting that most games will be short and one-sided all season.

“I don’t ever like to see the kids quit, and I do everything possible to keep them on the field,” Lozinsky said. “They understand how hard it is, and I applaud them for taking the heat for it.”

Coach Farris has taken advantage of his ability to make some changes as the school’s AD, and this season the Tigers will not compete in a district and will play primarily a junior varsity schedule.

“This way they have a chance,” Farris said. “It’s the only way to build it up is to actually get to play some teams and be on the field. I just felt it had to be done; it was something we needed for the program.”

Once baseball season is over, the kids don’t think about the game again until the following spring, as there are no offseason options for them. Every season is a new start with mostly a new crop of players. It may start with 30, but in the end, it usually whittles down to the final starting nine because of various reasons.

The hope is always that every player figures out the start to any winning team is the ability to remain relaxed, in control of your emotions and able to enjoy the game no matter how well it is going. That sort of demeanor can be contagious.

Last season, Dillard had a player like that, a catcher named Carl McMillan. The Panthers won four games last year in McMillan’s senior season, their best season under Lozinsky. When Lozinsky first inquired about the job five years ago, he was simply told if he could field a team the job was his. Now the teacher who loves baseball is like an uncle and a dad to these players, getting regular progress reports and monitoring their grades.

“By the grace of God, we won a game my first year,” Lozinsky joked. “But now we are fortunate to have an assistant coach from the Bahamian National League, Fitzroy Williams. The excitement is there, the buzz is going around, and I’m excited to see who’s going to come out of nowhere and surprise me.”

COMING TOMORROW
Our series concludes with a look at all of the coaching changes that made for a busy summer in the Broward high school baseball community.