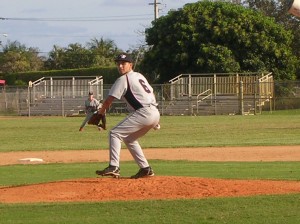 The Northeast Hurricanes had their offense rolling Tuesday, racking up 14 hits as they beat the Coconut Creek Cougars 15-4.

Eight Hurricanes had hits to really put the pressure on the Cougars’ defense. The Hurricanes scored more than one run in four of the six innings played.

Coconut Creek kept its cool and a positive attitude, playing hard until the end. The Cougars put a nice, bottom-of-the-sixth rally together, scoring four runs that showed a never-say-die attitude.

Northeast didn’t waste any time putting runs up on the scoreboard. In the top of the first, Vince Duarte reached base on a walk and was followed by consecutive singles from Danny Swanson and Corey Korenic. Pitcher Austin Ligons got on base on a fielding error, and left fielder Anthony Horvat, who had three hits on the night, drove in two to give the Hurricanes a 4-0 lead right out of the gate.

Coconut Creek starting pitcher Nick Rivera, who made a couple of really nice fielding plays and reached base twice in the game, didn’t let the Hurricanes’ big first inning get him down. Rivera stayed strong and struck out three of the four batters he faced in the second inning. In the third, it was three up, three down with a strikeout to keep his team in the game.

“I tried telling my teammates to have heart, stay in the game keep your head up keep going and don’t quit,” Rivera said.

Ligons, the winning pitcher, went five and two-thirds innings, striking out seven and only facing 14 batters through four innings.

“We focus on getting the first out of every inning, and I thought for the most part he did that,” Hurricanes coach Kevin Carney said.

In their half of the fourth, the Hurricanes added two more runs to extend the lead for Ligons. Angel Lara singled and reached second on a wild pitch. Right fielder Lara and second baseman Andrew Gross, who walked, were moved over on a sacrifice bunt by Eduardo Uriarte. Lara scored on a ground ball and Gross on a fielding error.

A lead-off walk in the top of the fifth by Korenic followed by three more singles in a row by Ligons, Horvat and Carlos Perez, who replaced DJ Kelly, led to two more runs to make the score 7-0.

In the Cougars’ half of the fifth, they were threatening to have a big inning to get back into the game. A couple of singles by Donovan Kamer and Angel Caraballo followed by a walk to Milvio Martinez loaded the bases, but all would be left stranded.

The Hurricanes kept big pressure on the Cougars, having their biggest inning of the game in the sixth. Number nine hitter Andrew Gross led of with a single to right, and Uriarte, an excellent-fielding shortstop, followed with a base hit. A sacrifice bunt by Duarte moved the runners over before a walk and four consecutive Hurricane hits led to a seven-run inning to put the game just about out of reach for Coconut Creek.

“Offensively, I’m very pleased,” Carney said. “That was probably our best performance since I’ve been here.”

Just when you thought there was no chance, the hearts and bats of these Cougars came out in the bottom of the sixth. The atmosphere after a lead-off infield single by catcher Robert Morrison and another base runner who was hit by a pitch, was hopeful and optimistic by the fans and the players. A 6-4-3 double play quickly took care of the Cougars’ base runners, but still the Cougars rallied for four runs with two outs to try to extend the game for another chance at bat in the seventh. Two singles, two walks, a passed ball and a couple of errors got the Cougars close but not enough to make it to another inning.

Coconut Creek coach Roger Davidson spoke about his team’s performance and what he expects from them moving forward.

“These kids won’t quit, but we’re not doing the things that it takes to win,” he said. “Everything is to improve everyday and get ready for the tournament. That’s what this is about. These kids, they won’t quit, I can tell you that.”