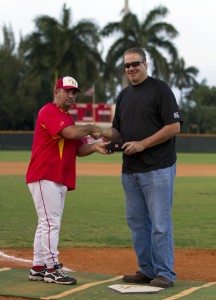 South Broward coach Joe Giummule needed just one phone conversation with former Major League Baseball player Jeff Juden to add some pizazz to his Spring Break tournament, turning the invitational into something special for the players of the four teams participating.

Click here to view the photo gallery of the night’s festivities.

Giummule contacted Juden and told him what he was trying to do at South Broward: continue the tradition created by Len Koch and his son, Darin, of turning boys into fine young men. The elder Koch coached the Bulldogs from 1969 to 1994. Darin stepped in as coach and led the Bulldogs through the 2009 season.

“I’m just trying to build on what they created,” Giummule said.

Giummule, who became coach in 2010 and promptly led the team to a district championship, asked Juden to sponsor the tournament and be a part of it. Juden, who is the Florida representative for the eyewear company Sniper Sports International, was amenable and the name of the tournament eventually became Jeff Juden’s Sniper Sports International South Broward Invitational.

“He was all for it and thought it was a great idea,” Giummule said. “It’s nothing but a win-win situation for the school, community and kids. And that’s what it’s all about. We do this all for the kids.”

Juden said he was enticed by the idea of getting to do something special for the players.

“I jumped on board and was happy to help out and support the local kids,” Juden said. “I’m happy to be out here and to give back. I want to help the kids enjoy this.”

Juden, who played for nine major league teams in his professional career from 1991 to 1999, threw out a ceremonial first pitch as the tournament kicked off Friday night with a home-run derby and fastest-man competition. Winners of those events plus the tournament’s most outstanding pitcher and player get a pair of the company’s sunglasses. All players received different-colored T-shirts.

As the four participating teams — South Broward, Dr. Krop, Deerfield Beach and Chaminade-Madonna — warmed up with infield/outfield leading up to the home-run derby, a festive atmosphere provided a backdrop with the smell of barbecued pulled pork wafting through the air. 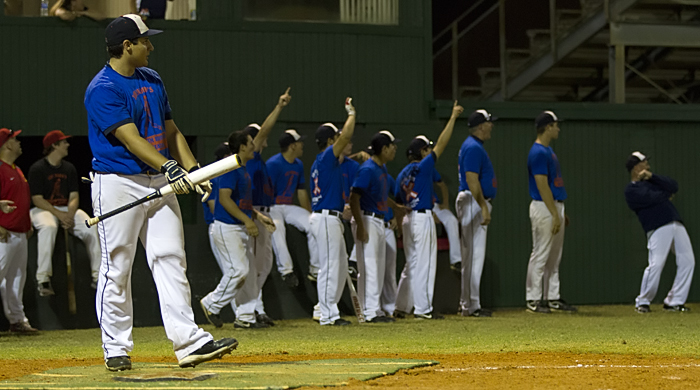 “It was a great honor [to win the home-run derby],” said Pino, who has hit one homer so far this season. “I won it for my dad, who is in Venezuela. It was an awesome experience. I know I didn’t do everything he told me to do, like getting under it… This is for my team.”

After the home-run derby, another group of players competed in a fastest-man competition with the players running a 60 to qualify for the final round of around the bases. Chaminade’s Danny Vitello, Krop’s Ronald Williams and South Broward’s Dylan Weichhan made it to the final round. Weichhan won with a time of 14.5 after a 6.75 60. Williams was second in 14.64 and Vitello third in 14.75.

“It took everything out of me,” Weichhan said. “I was focused on getting on the inside of the bag and taking long strides.”

Weichhan said having Juden be there was a thrilling experience for him and his teammates.

“It’s awesome. You see pitchers out in the major leagues and they look big, but when you see one [in person], they’re huge. It’s awesome to see a guy who made it into the bigs and was successful.”

Krop coach Jason Sullivan said Friday’s festivities were “a fun little deal. This is great for the players. They get to relax and get release from the every-day grind.”

The round-robin tournament begins today with South Broward facing Chaminade-Madonna in the opener at 11 a.m. Krop and Deerfield will follow at 2 p.m. Games continue Monday and Tuesday.