Deerfield Beach Gets Ready For Districts With Win Over Coconut Creek 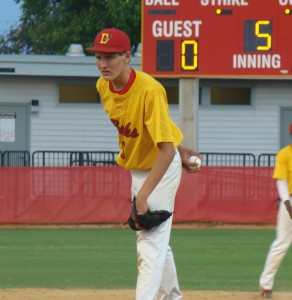 Mitchell Carroll pitched the Bucks out of two jams Thursday en route to earning the win.

Deerfield Beach and Coconut Creek picked the perfect time to play a tight ballgame with the district playoffs beginning Monday.

Deerfield turned in the type of performance on defense that can lead to success and found a way to win Thursday night, defeating the Cougars 2-1 in the regular-season finale for both teams.

The former district rivals played through the first four innings scoreless before Creek (6-13) broke through in the fifth. Robert Morrison stroked an RBI single to make it 1-0.

Deerfield (3-17) answered right back in the bottom of the fifth. George Edmunds walked and his pinch-runner John Grassi went to second on a passed ball. Keenen Smith’s hit, the lone one of the night for the Bucks, brought Grassi home to tie it when the Creek defense tried to make a play at first instead of at home.

Luis Matias scored the go-ahead run in the bottom of the sixth after getting on with a fielder’s choice. He got to third on an error at second and came in on Kurt Hardy’s RBI sacrifice fly.

“I was proud of my kids. They played hard all night,” Creek coach Roger Davidson said. “We made plays all night, but we had two mental errors that let two runs score, and that was the different in the game.”

“We executed all night, but you can’t make mental mistakes. You can’t play umpire. That just can’t happen.”

Both teams got good performances from their pitchers — Nick Miller and Mitchell Carroll for Deerfield and Rivera for Creek.

“[Rivera] pitched very well and deserved to win the game,” Davidson said. “He pitched outstanding. He was doing everything that need to be done. He had a good fastball tonight and threw very hard.”

Carroll relieved Miller in the fourth and worked out of a bases-loaded jam created by an error and two walks. Carroll got Angel Ramos to pop up and then struck out the next two hitters to end the threat. 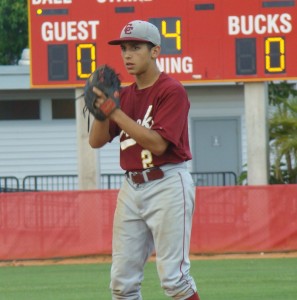 Nick Rivera pitched a strong game for Creek, allowing one hit in his complete-game performance.

Carroll “made things interesting” in the top of the seventh, Bucks coach Scott Bragg said, and again loaded the bases with two outs. A putout at first base ended the game.

“I wasn’t finding my zone too well, but I fought through it,” said Carroll, a freshman. “I beared down when I had to. Keenan helped me fight through it.”

Of Carroll, Bragg said “when the cards are down, he’s a battler and did a great job for a freshman.”

“Their pitcher had us off balance. He got us to roll over on a lot of balls. They fundamentally made the plays. Fundamentally, Roger had them ready.”

Coconut Creek will try to continue its fundamentally sound play when it opens the District 7A-15 playoffs at host Northeast at 7 p.m. Tuesday.

Bragg said Deerfield has been working all season on the things it needs to in order to be ready for the tall order that awaits it come Monday in District 8A-11. The Bucks need to beat South Plantation on Monday in a play-in game. A win puts them up against third-seeded Douglas on Tuesday in a quarterfinal.

“Games like this always get you ready for the playoffs,” Bragg said. “I think we’re right where we need to be.”