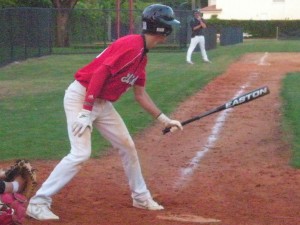 Sheridan Hills’ D.P. Ward bats in the fifth inning, and the senior third baseman also had a highlight-reel catch over the sideline fence in the third inning.

Sheridan Hills Manager Tim Talpesh knows his team is better than they realize.

Even though the team is struggling now, the coach knows that they are capable of being where they need to be at the end of the season when the results really matter the most.

In the meantime, Talpesh can only keep plugging away and hope that the tough ones such as Tuesday’s 12-0 shutout loss to St. Andrew’s can only help to motivate his young team to keep working towards their goals.

“We’ve given up 34 runs in three games, but only four of them have been earned,” Talpesh said. “We have pitchers who can succeed, but it’s all relative to how well we play defense.”

On Tuesday, the Sharks (0-3) committed three errors but also misjudged several other balls that were then able to drop for hits.

St. Andrew’s (3-0) sent 12 hitters to the plate during an eight-run third inning that helped to put the game out of reach.

“We’ve had one bad inning in each of our three games this year,” Talpesh admitted. “If we can just limit our errors we can at least be in those games.”

Meanwhile, Scots starter Zach Moses did not allow a hit in his three full innings of work, picking up the victory after limiting Sheridan Hills to a pair of walks while picking up seven strikeouts.

Yet despite their early struggles, the Sharks continued to battle and show their mettle down the stretch. 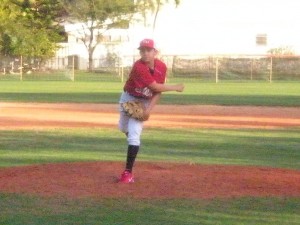 Sheridan Hills freshman Will Marsh came on in relief and pitched the final two innings for the Sharks.

After being held hitless by Moses, Sheridan Hills jumped all over junior reliever Alec Ventrice. D.P. Ward broke up the no-hit bid with a leadoff single to center field, Eric Morla followed by lacing a shot past the third baseman, and then Marquis Rodriguez singled through the right side of the defense to load the bases.

St. Andrew’s managed to escape the inning with three straight putouts to extend their scoreless streak on defense, as the Scots have yet to allow a run in its three games this season.

“We have not given up a run yet because of our pitching and our defense,” Scots Manager George Sands said.

The Sharks got a strong bit of defense of their own to escape a tough third inning, as third baseman D.P. Ward tracked down a foul pop fly along the sideline fence and then leaped over the top of the metal rail and stuck his glove out to snare the ball and finally record the third out of the frame.

“I saw it in the air and I was like ‘You know what, I will knock down this fence if I have to’,” Ward joked. “I just watched it fall into my glove and it felt amazing.”

Although the team needed many more such plays on this day, Coach Talpesh could not be happier with the effort his young squad has shown despite the discouraging outcomes thus far.

“This is not the part of the season that counts,” Talpesh said. “As long as we get better everyday, get to where we are making routine plays and only giving teams three outs an inning, then we’ll be a competitive team.”