Overview – With this being a two-team district, there’s no surprise about who’s going to be playing for the district title. The teams held a dress rehearsal of sorts on Feb. 28 with Zion winning 13-3.

Zion Lutheran pitcher Alex Ernestine fueled the Lions that day. He had his ‘A’ game going, striking out 12 overall and the side in the second and fifth inning. Ernestine displayed great control, throwing many pitches for strikes and getting ahead of the hitters for the major part of the game, and he allowed only two walks and two hits. Ernestine helped his own cause by having a big day at the plate. He had three RBIs courtesy of a two-run home run in the first and a sacrifice fly in the second. 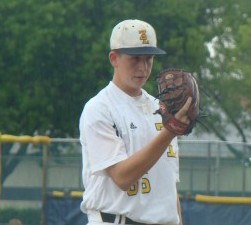 Alex Ernestine leads the Lions on the mound and also is a top hitter.

One of Zion’s biggest wins this year was against Coral Springs Charter. The Lions dominated that day, defeating the Panthers 8-1.

Offense is a strength for the Lions with a team batting average around .350 and five players who are hitting at least that well. They include Manny Rojas, Johnny Mendez, Alex Ernestine Nick Vasquez, Mike Rand. Rojas has scored more than 20 runs, and Ernestine has drive in more than that.

To complement his hitting, Ernestine also is the leader on the mound. He has throw more than 35 innings with at least 45 strikeouts and an ERA a little above 2.00.

Robert Barradas and Blayne Baker also have pitched a significant number of innings. Barradas has won at least five games and his ERA is around 1.40. 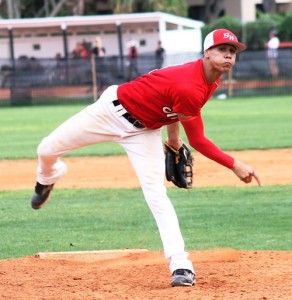 Marquis Rodriguez is among the top players for Sheridan Hills this year.