5A-16 Preview: Can Anyone Stop Patriots From Repeating?

Overview – When you constantly win the state title and are ranked among the top teams in the country most seasons, there is little question that you will enter your district tournament as the clear favorite.

American Heritage has every reason to play itself right into a home match in the opening round of the 5A regional playoffs.

Certainly Pompano Beach does not view the Patriots as an unbeatable giant, but rather as a very difficult and worthy opponent, the type of opponent that requires your best game to defeat.

Fortunately, the Tornadoes have a habit of playing their best baseball when they are presented with large challenges.

It will take a world of unlikely scenarios for the lower seeds in the district to pull off the monumental upset. Neither has managed a run against either club this season, and it is a great challenge to match a young and growing team against one of the best in the nation.

The Tornadoes and Patriots have waged some nice wars in the past as old district rivals, and should all go as expected they will get at least one more chance to add a chapter before next year’s district realignment. 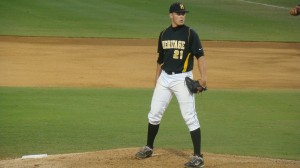 The Patriots have done plenty of winning, coming into the 5A-16 tournament not only as the defending district champions but also the defending Class 5A state champs as well.

This season has seen its rewarding moments as well, such as when Heritage won the esteemed Selective Recruiting/Sir Pizza Spring Break Invitational over Douglas and former Manager Todd Fitz-Gerald.

The Patriots also come into the district playoffs on a 10-game winning streak.

Up and down the team’s roster is an eye-popping abundance of Division One and Major League caliber talent.

Offensively the players averaged over .350 for the year against all of the toughest competition the Patriots could find, and they also averaged nearly 11 runs per game while also slugging over .550 for the year.

Leading the way is slugger Danny Zardon, who has 15 extra-base hits and a batting average right near .500.

Brandon Diaz has excelled at scoring runs for the club, while Chatham, Michael Deeb, Zack Collins and Magglio Ordonez have also all wrecked havoc with a heavy bat.

On the mound the club had a team ERA of 1.17, with a rotation three-deep in Louis Beck, Shaun Anderson and Ryan Givens. Closer CJ Chatham has been lights out in relief, sporting an impressive two strikeouts per inning.

These are the type of numbers that typically lead to playing baseball for a living, or else at least for an education.

But first the Patriots have a district title to go out and defend. 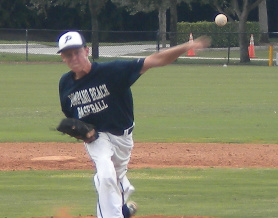 Left-hander Brian Dolan will be counted on for some big innings for the Tornadoes.

2. Pompano Beach – It is never wise to look past any opponent.

But for the Tornadoes, there is a level of comfort in knowing they have outscored semifinal-opponent Dillard 29-0 in two lopsided victories this season.

Should Pompano take care of business, it will likely be headed for a repeat match up of last season’s district championship.

Unfortunately for Pompano, the Patriots won that game handily, and they have won 19 straight over the team dating back to 2006. As so many other high school baseball teams across the state of Florida find out, American Heritage is just tough to beat.

It is a veteran group among the leaders looking to make team history with a big upset, a crop of seniors in shortstop Shaw Pinnell, first baseman Matt Fengler and pitchers Brian Dolan and Tyler Keller. In all the team has 10 seniors on the roster, all hungry to make the most of their final chances at American Heritage.

Pinnell has been the main component at the plate in leading Pompano in extra-base hits and also sharing the team lead with Matt Fengler with four home runs apiece. Pinnell has also played Gold-Glove type defense.

Fengler leads the squad in RBIs and runs, and has also been crucial on the mound along with Rory McNamara as the two primary relievers.

McNamara sports an impressive 3-0 record to go with an ERA and WHIP both south of 1.00.

Dolan and Keller have both given Pompano important innings this season, and if all goes according to design the team could rely on both of them against the Patriots. 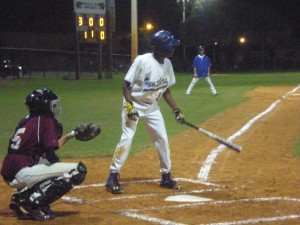 Junior Cleveland Westbrook sets the tone at the top of the Dillard batting order.

3. Dillard – The Panthers won as many games this year as the past two seasons combined, and the team has slowly begun to shorten the gap towards competitive baseball.

When students go to Dillard High, baseball is not the first sport they think about. But Manager Daniel Lozinsky has put together a team over the past few years that is excited to learn and play the game.

Team chemistry is an important and sometimes crucial element of any team sport, and that is one area that Dillard does not have any problems. Players are tight, communication is open, and the guys get one on another to play hard and stay focused.

It will take the Panthers best game of their careers to pull off the upset against Pompano Beach and advance to the district championship.

But that isn’t to say the team is not vastly improved.

Leading the way is junior Cleveland Westbrook, a lanky right-handed pitcher who led the team in innings pitched and ERA. Junior lefty Daniel York has been a nice compliment with a team-leading 31 strikeouts and a 2-1 record.

The Panthers have improved at the plate, but still sport a low team batting average and were shut out five times this year.

Westbrook also leads the club in hitting with a .345 average and runs scored with 14, and junior Lance Nelson is tops on the squad in extra-base hits and RBIs.

The name of the Panthers game is speed, as they swiped more than 60 bases on the year.

Should Dillard do the impossible and steal a victory, it would represent the hard work and dedication of the current group.

Regardless, the future is bright with most of the team back next season and a district realignment that may bring more favorable district opponents for the young club. 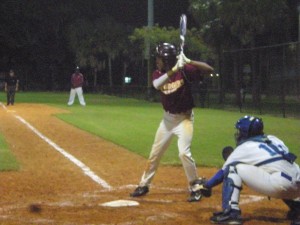 Anthony Moron is a speedy hitter who also has power, as shown here when he hit a grand slam against Dillard.

4. Hallandale – It is not an enviable position that the Chargers find themselves in for their semifinal contest in the 5A-16 district playoffs, where they will face national powerhouse American Heritage.

Not everybody gets to say they played the champs in the playoffs, but certainly most would prefer any other opponent as well.

Hallandale has struggled with its youth, managing but two wins on the year. In times like these it can be tough to stay positive, as the team has more realistic chances of competing in the long-term outlook.

Youth is served on the Chargers, as the team has just three seniors, and it has plenty of promise in its youngsters. Freshman righty Joshua Martinez Aquino shows ability to someday emerge as the team’s ace, and sophomore Anthony Moron has a quick bat and even quicker feet on the bases.

Junior Valentino Mastrodomenico is the current workhorse on the mound for the Chargers, and Michael Clarke also fills out the rotation.

The team struggled overall at the start of the year, and particularly on offense, where it went six games before scoring its first runs. The club rebounded to average four runs per game to close out the regular season.