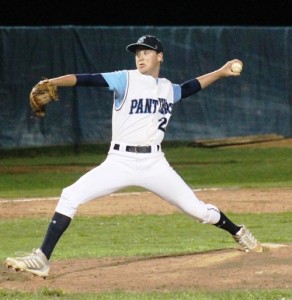 Brent Kessinger went the distance for the Panthers.

Ask Coral Springs Charter Manager Dan Rovetto how he felt about his team’s chances against Somerset Tuesday night, and he will give you an honest assessment of 4A-13.

“The seedings don’t mean anything in this district,” said Rovetto. “I tell people all the time, this is the most competitive district top to bottom as any district I have ever been associated with.”

That gave second-seeded Coral Springs Charter something to worry about against seventh-seeded Somerset. Already, 4A-13 had shown its unpredictability in the first two games of the tournament, both of which were won by the lower seed.

Early on, it looked as though Somerset was poised to make it three out of three for the lower seeds, but Charter was able to recover from some early mistakes and then hold off Somerset for a 5-1 victory.

“It’s just great baseball in this district, and we knew they were going to come in here ready to play,” said Rovetto, who’s team had a chance to jump out to an early lead, putting runners on second and third with no outs in the first. Two baserunning blunders, however, cost the Panthers, and they came away with no runs.

Somerset sent Brandon Acevedo to the mound, assuring it would be a low-scoring affair. Acevedo has been the ace of the Panthers staff for several seasons, and has thrown all of the team’s big games. Tuesday night, Acevedo was again on his game, shutting out CS Charter through the first three innings.

Charter, however, had Brent Kessinger on the hill, and he matched Acevedo pitch for pitch, Kessinger ended up going the distance for Charter, allowing only one unearned run, while striking out six.

“Coming into this year, Brent hasn’t pitch a heck of a lot, so we’ve been taking it slow with him, stretching him out,” said Rovetto. “But he has really stepped up, and he knew we needed him to go deep into the game tonight, with us having three games this week. For him to come out and perform the way he did, taking a no-hitter into the sixth, that’s impressive. It’s a kid who got his opportunity and has run with it.”

So how did Kessinger go from virtual unknown to starting the biggest game of the season for the Panthers? 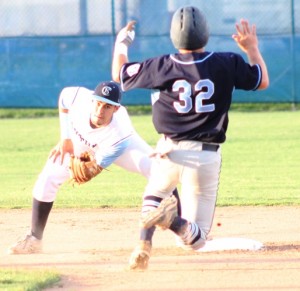 “I just kept going out to practice and doing what I had to do,” said Kessinger. “Then I got an opportunity to get out there, I knew we were looking for another guy in the rotation, and I had to step up and perform.”

And perform he did. The lefty gave up only two hits in the complete-game effort.

Even with Kessinger throwing a gem, a couple of defensive lapses allowed Somerset to take a 1-0 lead in the top of the fourth. With Acevedo on the mound, the Panthers started thinking upset.

“I knew that bottom of the fourth was going to be a big inning,” said Somerset Manager Onel Garcia. “They had the heart of their order coming up, and I thought if we could get through that inning with the lead, we would have a good shot at winning the game.”

Charter answered Somerset’s run with two of their own. Joe McChrystal, who reached base four times in the game, started the inning with a single. Luis Guillorme executed a perfect sacrifice bunt, and Stephen Kerr followed with a bloop double, scoring McChrystal. Kerr’s hustle out of the box turned what would have been a bloop single into a double. It was just the start of the show Kerr would put on the rest of the game.

Once the Panthers had the lead, Kerr turned in two web gems in the field, taking the air out of the Somerset offense each time. When Somerset mounted one last rally in the seventh, Kerr and teammate Guillorme came up with one last highlight-reel play to end the game.

With runners on first and second, Luis Mercado hit a shot that went off third baseman Newi Guzman, Guillorme, who was moving towards third on the play, quickly grabbed the ball and threw a strike to Kerr at second to force out Etienne Latour. 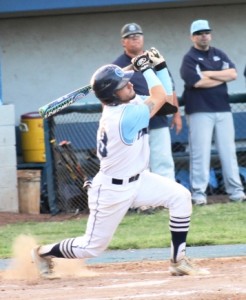 “These guys have been doing that kind of stuff all year,” said Rovetto. “Just for Luis and Stephen’s instincts put them in the right spots on that play is impressive, never-mind that they actually got the out.”

For Kerr, the defensive gems are something he has grown used to alongside Guillorme.

“Me and Luis, ever since we first played together in the summer going into our junior year, we always had a feeling for each other out on the field,” said Kerr. “We’ve always known where the other would be in different situations. I guess you could say we have been prototypical middle-infielders.”

Kerr, Guillorme, and the rest of CS Charter will be able to put their skills on display again Wednesday afternoon against Pine Crest.

For Somerset, a season of high expectations ends abruptly, but not before Acevedo and the rest of the seniors did something special.

“I told them they have nothing to hang their heads about,” said Garcia. “These guys have helped put Somerset on the map the past couple of years, and they are a big part of where we are going as a program. They have won some big games in their time here. They won the Fall Classic this year, and even though it was the fall, it was a great atmosphere and something these kids won’t forget the rest of their lives. They should be proud of everything they’ve accomplished.”