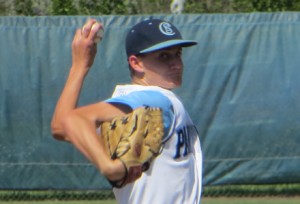 Chris Budden pitched into the seventh, picking up the win.

Coral Springs Charter left fielder Brandon Laboy only had one thought in his mind as the ball was hammered in his direction: You better catch that.

His team was up 4-2, but their opponents in the 4A-13 championship game, North Broward Prep, had the bases loaded with two out in the top of the seventh.

Up stepped power hitter Hernando Sierra, who proceeded to club a pitch from closer Stephen Kerr high into the night.

Laboy didn’t appear to see it well off the bat, stepping back slightly, before lunging forward at the last second and catching the ball in an awkward, off-balance style.

“I didn’t expect the ball to go that far, and then it went in a little bit,” said Laboy, who admitted his first thought when he hit the ground was “yes!”.

It was a catch that secured a second straight district title for the Panthers and a home game next week in the regional quarterfinals versus either Archbishop Carroll or Monsignor Pace. 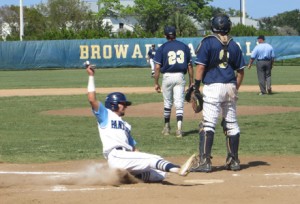 Stephen Kerr slides in for the game’s first run.

“That was a wild one, which is par for the course in this district,” Charter Manager Dan Rovetto said. “With the amount of pitching we lost from last season, for these guys to compete how they’ve competed on the mound is unbelievable.”

While the final play was exciting, it slightly overshadowed the stellar performance from Panthers starter Chris Budden, who threw six solid innings, allowing just one run on five hits with four strikeouts and a walk.

“Buddy did great tonight,” Rovetto said of the junior, who had only made two starts all season. “He went 78 or 79 pitches, and that was extending him. I wanted to give him an opportunity (to finish the game), and then when he got the baserunner, we brought in our closer.”

Coral Springs Charter (21-7) built their four-run lead in small doses, striking first with a run in the second when Kerr scored on an infield error.

They extended their lead to three in the fifth when, just after forcing Eagles starter A.J. Fidalic from the game, Joe McChrystal cracked a two-run double off reliever Joe Simpson. 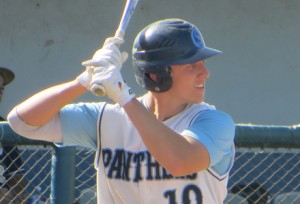 Joe McChrystal drove in a pair of runs for the Panthers.

Another insurance run came in the sixth when Cody Woodburn drove in Laboy with a line drive single to center field.

Along the way, the Panthers were stellar defensively, with three of the four infielders –- Luis Guillorme, Kerr and Matthew Fiernan –- all making outstanding plays.

Kerr certainly tried to make things interesting in the final inning, giving up three hits, a walk and a hit by pitch, but he managed to pick up his third save of the season thanks to Laboy’s effort.

As for North Broward Prep, they will head south to Miami-Dade County on Wednesday.

“Their pitcher controlled the game, and we didn’t help ourselves defensively,” said Manager Brian Campbell, who only got one multi-hit effort from his team (Mack Nathanson). “We got beat by a really good ballclub tonight.”