Flanagan Walks Off 1-0 In Pitching Duel With Everglades 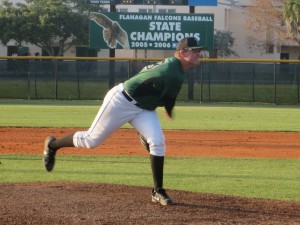 Flanagan ace Gentry Fortuno pitched a two-hit, complete-game shutout with 11 strikeouts to lift Flanagan to the 8A-12 title game.

It was a match-up that folks in the district had been waiting for all season.

Wednesday’s 8A-12 semifinal featured a marquee meeting between Everglades ace Adam Murray and Flanagan standout Gentry Fortuno, with a berth in the regional playoffs on the line.

The two did not disappoint the large crowd that gathered at Flanagan High, as both went the distance in an epic duel for the ages.

In the end, host Flanagan walked off with the hard-earned 1-0 victory as Alex Sarmiento scored on an RBI double from Oscar Rodriguez in the bottom of the seventh inning.

The Falcons (17-5) will now play Cypress Bay for the 8A-12 district title, after the Lightning defeated West Broward 2-0 in the other semifinal Wednesday afternoon.

“I applaud them; that was probably their best game of the year right there,” Flanagan Manager Ray Evans said. “They came in here with nothing to lose and everything to gain, and we had everything to lose. Adam Murray pitched a phenomenal game tonight and you’ve got to give it to him. He shut us down every which way. He was hitting great spots and he did a fantastic job. But flip a coin, and Gentry matched him.”

For the sophomore Fortuno, it was his fifth complete-game, shutout victory of the season as he improved his season tally to 8-0 while also remaining unbeaten in his high school career.

He cruised through the Gators (11-8) in throwing just 89 total pitches, 64 of which found the zone. Everglades managed just two hits and two walks on the night, while Fortuno recorded 11 strikeouts in all.

But despite all of this, he still walked off of the mound at the end of the top half of the seventh inning knotted in a scoreless tie.

“I really never have a doubt about our hitting; they always seem to pick me up,” Fortuno said. “In the last, in the first, I never really have to worry. I just do my job on the mound and if I see it going that’s a good step for me to just keep going out there and pitching my game.”

With the way Murray was also dealing, Flanagan struggled to reward their pitcher for his faith until the seventh inning, and even that hit came very close to being nothing more than a pretty out.

The hit that was really the back-breaker never went further than a few feet from the plate, as Andres Rios dropped down a perfect bunt that died on the infield grass to give him the time he needed to race to first base for the single leading off the bottom of the seventh. 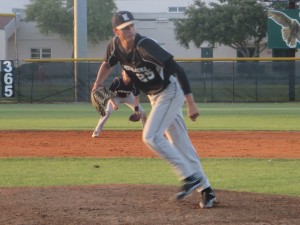 Rios was erased on a fielder’s choice off the bat of catcher David Sarmiento, who then gave way to his brother Alex as a courtesy runner.

When Rodriguez connected, he had his eyes on the ball watching it carry deep to left field as the Everglades defender raced back in pursuit.

“He played it in a good spot to catch it, so as I was rounding first I saw him getting closer and closer and I got a little scared,” Rodriguez admitted. “But it just kept carrying and carrying, and fortunately it dropped. It was two good pitchers going at it, and Adam was a really good pitcher. He just made a mistake and left it high and I capitalized.”

The hit also rescued a Flanagan offense that lacked its usual punch, finishing with just four hits after hitting over .300 as a team for the season.

Flanagan stranded seven runners on base in all, as Murray continually found ways to get out of trouble.

Anytime a pitcher has a game like that, it is always difficult to imagine coming out of it on the losing end, especially when it means the end of your season.

Yet despite Wednesday’s results the Gators walk away knowing they just went toe-to-toe in the playoffs with the district heavyweight just two seasons since they posted a 1-10 district record. Everglades also finishes with its first winning season since Oddibe McDowell took over the team four seasons ago.

“Our hats are off to Oddibe for getting them prepared, to Adam Murray, and the job that entire team did tonight,” Evans said.

Everglades played like a team hungry to reach the next round of the playoffs, and one confident enough to defeat the Goliath in their district to get there.

“Every game that we play is basically a championship game, because it’s always a championship to them,” Fortuno said. “Everybody wants to beat us. It was very competitive and Adam Murray stayed in the fight with us.” 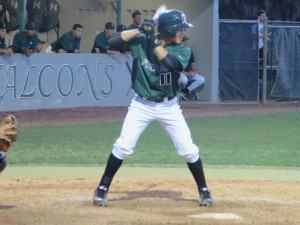 Junior Andres Rios had a big bunt-single to represent the winning run for the Falcons.

Everglades had its best scoring opportunity in the opening frame, after Andrew Hernandez rolled one slowly up the middle of the field for a single and Brandon Escalante worked a walk to put two runners on base.

A fielder’s choice from Anthony Dos Santos advanced both runners into scoring position, but Fortuno got a called third strike to escape the jam and then went on to retire the next 11 batters in order.

He would not allow another runner to reach as far as second base until the seventh inning, when courtesy-runner David Gamero swiped the base before being stranded.

Defensively, neither team committed an error on the night. Each club made several big defensive plays, with the most notable one coming when the Gators catcher Dos Santos tracked a high, screaming foul ball along the netting behind the plate to snare the ball and end the inning with two Flanagan runners on base.

With the Falcons now set to defend their district title from last year, Evans is confident that his team will play with less pressure now that they know they have earned a spot in the regional playoffs. For a team with the highest expectations, this is merely another step in the process to take them to their ultimate goals of playing in Fort Myers in a few weeks.

“We haven’t seen the peak yet. We’re not on the tippy-top of the mountain yet,” Rodriguez said. “We’re going to come out against Cypress Bay with the same mentality, go hard like Flanagan baseball does, and hopefully come out with the win.”