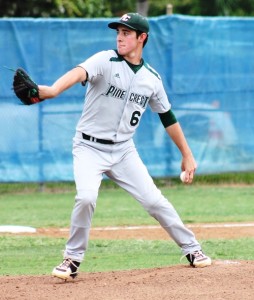 It was familiar territory for the Pine Crest Panthers on Tuesday. The team was faced with the prospects of winning two games to reach regionals, a situation they conquered last season.

Mother Nature threw a curve ball Monday, however, bringing rain and lightning to Broward College, and leaving the Panthers and their opponent, Cardinal Gibbons, to resume their quarterfinal match-up Tuesday.

Unlike Monday, the Panthers came out swinging Tuesday, scoring early and often in route to an 11-1, six-inning win over the Chiefs. The win moves the Panthers into today’s district semifinals against second-seeded Coral Springs Charter.

When the game began on Monday, the two teams were locked in a pitchers’ duel, with the Panthers Steven Goldberg and Chiefs’ Chris Williams going pitch for pitch. Just before the lightning delay, the Panthers were able to get on the scoreboard, putting up a run and leaving runners on first and third until play resumed Tuesday.

When the teams took the field to complete the game, the Panthers ran out the same lineup as the day before, while Gibbons chose to pull Williams, and go with Tyler Norris on the hill.

Pine Crest came out swinging, and by the end of the fourth, had extended their lead to 2-0.

In the fifth, the Panthers sent 12 batters to the plate, and put the game away with a seven-run explosion.

Cissel’s two-RBI hit was one of three singles on the day for the junior. He also added a walk and drove in five runs for the Panthers.

“Hot as a pistol,” said Panthers Manager Glenn Pierson, when describing Cissel’s afternoon. “He’s putting terrific swings on the ball at the plate. He and Coach Shealy have been working very hard together, and we knew that he was going to contribute all year, and today he did a fantastic job.”

Although the Panthers scored seven runs in the fifth, Gibbons Manager Frank Pisani had no second thoughts about switching pitchers for the second day of action.

“Chris threw a 40-pitch bullpen before the game started yesterday, then he threw another 40 pitches during the game,” said Pisani. “I can’t risk an injury there. I care more about Chris’ future than winning this ballgame. Plus, I have faith in my other guys on the mound.”

Pierson had an alternative thought process as he let Goldberg come back for two more innings on Tuesday. 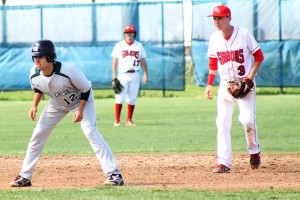 “He is a bulldog, and he wanted the ball again today,” said Pierson. “Yesterday he threw 32 pitches, which is like a bullpen session for him, so really the decision was easy to bring him back today.”

“I did everything I could last night to get my arm ready today,” said Goldberg. “I iced it and got plenty of rest, and I was lucky my arm felt great today.”

The win by the Panthers was a drastic change from the two games the team lost to Gibbons during the season. As is the case in any sport, it is tough to beat a team three times in one season, and Pine Crest had extra motivation to make sure the outcome this week was different.

“They got us twice during the year,” said Cissel. “In each of those games, we didn’t hit the ball very well. They are a very tough team, so we knew this time around we had to be more aggressive at the plate. Even yesterday we hit some balls hard that ended up being double plays, so we knew we had to stay aggressive today as well, and it worked out for us.”