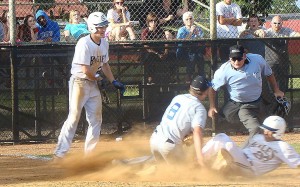 Calvary’s Nico Lares is thrown out at home in the bottom of the seventh.

As the saying goes, it’s hard to beat a team three times in a row. There’s also the saying that you can forget about records when it comes to the playoffs.

Highlands Christian came into its game Wednesday against Calvary Christian as a big underdog having lost to the Eagles 26-3 over two games during the regular-season.

The Knights put those games behind themselves and went out and played sound baseball for seven innings while holding off the Eagles to win 1-0 in a 3A-14 semifinal.

The win puts the Knights into the championship at 7 P.M. Thursday night against Coral Springs Christian.

“They thought they were just going to beat us again, and we didn’t want that to happen at our house,” said winning pitcher Kirvin Moesquit, who staged a pitchers’ duel with Calvary starter Andrew Gottfried.

Highlands built a 1-0 lead early as relief pitcher Mitchell Carroll drove in Joseph Ortiz in the first inning. From there, both teams struggled for opportunities to score, and when Calvary did put the bat on the ball, the Knights’ defense found a way to keep them off the board.

“I trust my defense,” Moesquit said. “They have my back. I just tried to throw strikes and let them hit it. I knew they were going to make plays, but I trust my team.”

Moesquit pitched into the seventh inning before being relieved when running into trouble as the Eagles loaded the bases with no outs on a leadoff double by Nico Lares, who finished with two hits, as well as a hit by Keith Oren and a hit-by-pitch.

Carroll came in to pitch and shut down Calvary. 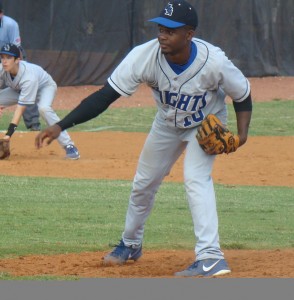 “I felt like it was the right thing to do,” Moesquit said about being pulled from the game. “I trust Coach Bruce. I didn’t want to come out, but he’s a good coach. He knows what he’s doing.”

Deion Rosalia, who had two hits for the Knights, said his team was focusing more on its recent success than about being shut down by its opponent twice this year.

“We just practice hard and go hard at it,” Rosalia said. “We had total confidence coming in because we won the last few games, and the win against Pine Crest was a big one for us.”

Highlands Manager Bruce Charlesbois said the game had been a treat for the fans in attendance.

“Kirvin pitched great, and he shut us down,” Mucerino said. “He was the difference. We just didn’t have an answer for him. Baseball’s a funny game, and it certainly did today. I thought we had something going there, but it just didn’t happen for us. Very disappointing. It’s sad for our seniors. Tomorrow’s another day.”