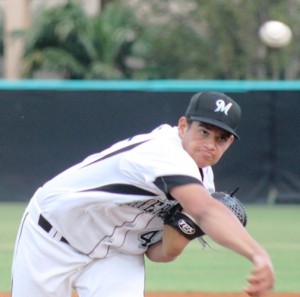 Andres Nunez pitched a complete game for the Mavericks.

Archbishop McCarthy continued its quest for a fourth consecutive state title Friday night by beating Pembroke Pines Charter 10-0 for the 6A-15 title.

It is the sixth consecutive district title for the Mavericks (21-5), who will host a regional quarterfinal Thursday against Belen Jesuit (19-8), the 6A-16 runner-up.

The Mavericks out hit the Jaguars (11-11) 11-1 as all but one batter in the Mavs lineup had at least one hit. Brian Gonzalez led the way, going 3-for-3 with a run and RBI. Aaron Soto went 2-for-3 with a home run. Michael Gigliotti (three RBIs, run), Brandon Vicens (two RBIs), Eddie Silva (two runs), Mike Hernandez, Ryan Sinzenich (two runs, RBI) and Blade Bielski (run, RBI) had one hit each.

Pines Charter starter Alejandro Kahn kept the Jags in the game into the fourth inning when the Mavericks scored four times to break open a 2-0 game. McCarthy added four more runs in the fifth to end the game by the mercy rule.

Andres Nunez pitched all five innings for McCarthy, striking out eight while walking none.