McCarthy Edges Fort Lauderdale To Return To 6A-15 Championship 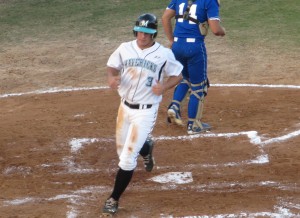 Brandon Vicens scores during a third-inning rally that put the Mavericks up for good.

As April creeps into May each year the baseball games take on a whole new level of intensity and passion as teams battle it out just so they can keep on playing.

As Archbishop McCarthy Manager Rich Bielski put it, this is playoff baseball.

As the last shots were fired it was Archbishop McCarthy emerging with a well-earned 4-1 victory over Fort Lauderdale, earning the top-seed’s entrance into Friday’s district championship to face Pembroke Pines Charter.

The Jaguars advanced after defeating Hollywood Hills in the other semifinal, played earlier on Thursday afternoon.

“That was exciting; there was a lot of adrenalin out there tonight,” Mavericks starter and winning pitcher Brian Gonzalez said. “It’s a playoff game and you want to go out there and produce as best as possible. It got a little edgy out there, but that’s always fun.”

The Mavericks (20-5) get a chance to defend their district title, as well as earning their sixth 20-win season in a row. The team also earns a berth in the regional playoffs, as they set their sights on making history in pursuit of their fourth state title in a row.

Yet even despite all of the program’s recent success, every year that road has required them to get past a tough and worthy district foe in the Flying L’s (13-8).

“They’re always well-coached, and they’re always a very aggressive team,” Bielski said. “Terry Portice does a great job over there year after year in preparing his team to play. We knew from the beginning they were going to come in tough. It’s playoff time of year. We’re ready for it, and it was a great game tonight.”

Fort Lauderdale had come into the game on an 11-game winning streak, which included an opening-round victory over Stranahan just to advance to Thursday’s contest. After a rough start to the season, the Flying L’s had managed to turn things around to put themselves right in the position they wanted to be in.

“I’m so proud of them; they did everything they had to do,” Flying L’s Manager Terry Portice said. “Down the stretch they played some tough games and they battled. They just came up short tonight. But I can’t complain an inch about their guts and determination and the fight they showed tonight.” 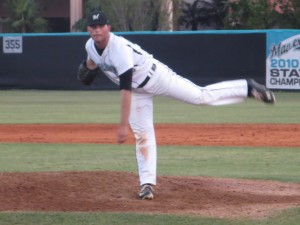 The Mavericks fell behind 1-0 early on after one of several big plays that brought out the fire in both sides, and McCarthy wasted little time in answering back.

Brandon Vicens was hit by a pitch and Gonzalez drew a walk, and then gave way to courtesy-runner Andres Matouk. Aaron Soto then loaded the bases when he dropped down a bunt and the throw to third was too late to catch the lead runner.

Vicens came in on a wild pitch to even the score, and then Eddie Silva put McCarthy ahead for good with a sacrifice flyout that pushed across Matouk with the winning run while putting the Mavericks ahead at 2-1.

Flying L’s starter Brad Smith is no spring chicken to facing this vaunted McCarthy lineup, as he has faced them each time the two squads have met during his brilliant career. Playing in what would ultimately be his final high school game, Smith found himself facing a team that he has battled many times before, and one that he has been working and focusing for all season long.

“We’ve been playing every year to play for this district championship with Archbishop McCarthy. I just wanted to give my team the best shot to win and give it all out there,” said Smith. “They are always the top seed, and I’m glad I’m done playing them.”

Although Smith ran into trouble in each of the first two innings, he managed to work his way through the jams. Even though the Mavericks had managed to take the lead in the third, they had failed to get a hit during the inning.

The Flying L’s ace continued to battle into the fifth inning, allowing one earned run on six hits and four walks. He struck out four while throwing 81 total pitches, and ends the season at 6-3.

After such a stellar high school career, Coach Portice admitted how much he will miss his ace pitcher, as well as their other senior captain in catcher Kenny Miggins.

“Brad’s been with us for four years battling with his best stuff, and I just have a great amount of respect for that young man,” Portice said.

Portice credited these two captains with helping to right the ship this year after their poor start, as well as setting the example on how the younger players have learned to conduct themselves both on and off the field.

It was a sentiment shared by their ace as well.

“There’s no other team that I want to play for,” Smith said. “We started off slow, but we came together as a team, and no one could beat us. I know we don’t get the top recruits every year, but we follow coach’s methods and we’re going to be in every game.”

Such was the case on Thursday.

The Flying L’s broke open the scoreless game in the top of the third inning, after Justin Fucci and Miggins sandwiched a pair of singles around a walk to Hunter Kay to load the bases. Matt Gibson then hit into a fielder’s choice to push Fucci home for the 1-0 lead. 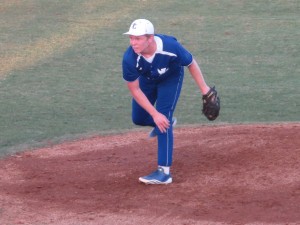 Miggins was forced out at second base on the play, and broke up a potential throw for a double-play on his slide into the bag that took down second baseman Blade Bielski, bringing the Mavericks manager storming out onto the field in protest while igniting the home team in the dugout.

Almost immediately the intensity of this contest rose, as both sides became more animated and aggressive with their play. Eventually both sides were issued warnings from the umpire, and a player was ejected for flipping his bat back and off of the opposing catcher after drawing a walk.

“I like kids with passion, and I think you have to play with passion,” Portice said. “I’d rather see them show too much passion then not enough, and they settled in and focused on the game after that. Earlier in the year we might have let a couple of those things affect us. But they showed composure tonight.”

Meanwhile, the initial spark had set the Mavericks ablaze.

“We probably needed that,” Coach Bielski admitted. “We had beaten them pretty badly the first time around and when they scored it woke us up and we really came on after that. Brian was great on the mound, and this is his time of year. He’s just a horse out there, and he’s also our emotional leader.”

After McCarthy went on top in the third, Gonzalez settled into a groove and shut the door on the Lauderdale offense. Even with the emotions around him flying high, he remained even-keeled and cool as ice. This demeanor seemed to help settle the rest of his teammates, fizzling the tension back down to just competitive baseball again.

“We go with him; he’s our leader like that,” Coach Bielski said of Gonzalez. “He’s calm in those emotional situations; he keeps his composure, and that definitely filters down to the rest of them.”

The big lefty finished the contest with 10 strikeouts, throwing 95 pitches over six full innings of work. Although he admits to always begging to stay in until the end, Gonzalez was not surprised to see Jason Stettner come in to close it out.

“It’s tough, because you’ve gone six innings and you just need to get three more outs,” Gonzalez said, while admonishing that he was confident the game was over with the ball in Stettner’s hands. “I know he’s going to pound the strike zone, and he’s going to get ground balls. He did a really good job today.”

After allowing a leadoff single to Brandon Rodriguez, Stettner closed out the side to end the game and earn the save.

Fort Lauderdale also got nice relief pitching in support of its ace, as right-hander Jason Jeffrey retired all six batters he faced, two via strikeout.

After being shaken up in the third, Mavericks junior second baseman Blade Bielski helped manufacture an insurance run when he singled, stole second and eventually scored on a passed ball in the fourth inning.

Blade also lined a first-pitch fastball into left field in the second to finish 2-for-3, the only hitter for either club with multiple base hits.

Batting in the bottom slot in the order, the young second baseman’s success at the plate also worked to pump up his teammates. 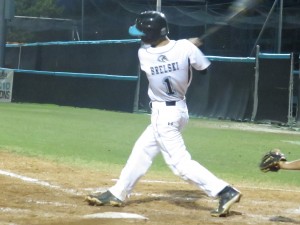 McCarthy’s Blade Bielski was 2-for-3 to lead all hitters.

“Hitting in the nine-hole is definitely different. Pitchers will go right at you and you’re not going to get many walks,” Blade said. “I’m one of those guys that when I go up there, if I get a good pitch I’m going to hit it. I like the opportunities I get because it’s like leading off, and I like starting the momentum to get the ball rolling.”

For both father and manager alike, the day’s success brings great joy to Coach Bielski, who also noted that Blade made a few nice plays on defense Thursday night that had just as much impact.

Neither team committed an error on a night that also saw several impressive defensive plays by each side. McCarthy third baseman Jonathan Quintana made a nice bare-handed grab and throw to record an out in the fifth, and the center fielder Vicens had a diving catch to record the final out of the game.

With this one now in the books, the Mavericks can focus on facing Pembroke Pines Charter in Friday’s championship bout.