Northeast Tops Monarch For 7A-15 Championship

It’s been years since Northeast won a district title in baseball.

After a more than a decade of either losing in the championship or not even making it that far, forgive the Hurricanes if they had some steam to blow off Thursday night in their 7A-16 final with Monarch.

Behind a dominant pitching performance by Ralph Morel and his strong supporting case on defense, Northeast defeated the Knights 3-1 in a championship moved to Deerfield Beach High because of unplayable field conditions at Monarch.

Northeast, which last won a district baseball title in the late 1990s under Jason Hamilton, will host a regional quarterfinal Thursday against the loser of tonight’s Nova-St. Thomas district final in 7A-16. Monarch will travel to the winner.

“Coming into today was just really exciting,” Northeast Manager Kevin Carney said. “We put so much time in. All our preaching, all our instruction, trying to get these guys to play their best game of the year at the right time, and I think we did that. We played as a team tonight, and that’s what we’ve been trying to stress since the fall. It finally came together tonight against a good Monarch team. They do a good job, and we take our hats off to them. It’s been a really healthy competition between our teams. We only hope it gets better in the future.”

Northeast lost to Monarch 12-2 and then beat them 3-1 the next day during the regular season. 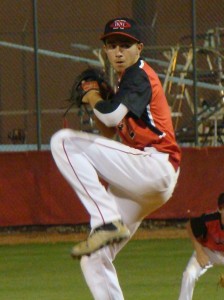 Ralph Morel was in control Thursday night for Northeast.

Morel started strong and maintained that level throughout the game. He finished with nine strikeouts, allowing two hits and walking three.

“That kid shut us down earlier in the year, and tonight he shut us down again,” Monarch Manager Joe Franco said. “Tonight he was better than our hitters yet again.”

Morel had a simple game plan going in.

Northeast cracked the ice first, scoring three runs in the fourth to go ahead. Kelly reached on an error and scored on another. Carlos Perez got on and made it over to second courtesy of an error. A balk put him at third before Eduardo Uriarte singled him in. Uriarte then came home on Jon Jarbone’s base hit.

“It was just a bad inning,” Franco said. “We gave them those runs. Credit to them, they put the ball in play. I’m sure that’s what their coach wanted them to do, put the ball in play and force the team to make a mistake, and that’s exactly what we did.”

Monarch capitalized on a mistake of Northeast’s in the top of the sixth to get its run. Alonzo, who was thrown out at the plate on a suicide-squeeze attempt two innings earlier, scored on a wild pitch.

“Our goal was to win a district championship, and unfortunately we didn’t meet that goal,” Franco said. “The good thing is we get to go to regionals. We get to play more baseball. I’m proud of my kids the way they battled, the way they competed, the way they played hard. We just have to fix our mistakes and maybe we’ll get further than we did last year in regionals.” 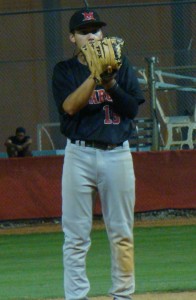 Monarch’s Nick Alonzo came in to pitch in the fifth and threw well. He also scored the team’s only run.

Morel said the difference Thursday for Northeast was how it played as a team.

“This game we all stayed up, we all talked up, no one put each other down,” Morel said. “As a team, we played as a team better than any other day.”

“To get to this point, we stayed together. We made the routine plays,” Uriarte said. “We just wanted it tonight more than anybody out there. Tonight we took it home. It feels amazing. And being a senior, this is my last year here. This was amazing winning this. And coach deserved this win.”

“We deserved that win,” Kelly said. “We played as a team. We’ve been ready for all this all year. It’s all anybody could talk about. We’ve been dreaming about this. It’s all we’ve been focusing on.”

Kelly said he’s optimistic about the team’s chances in the regional quarterfinals Thursday.