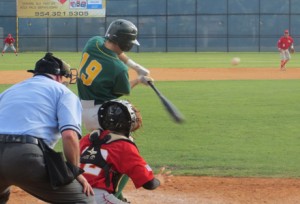 Coming into Wednesday’s 7A-16 semifinal against South Broward, the veteran Nova manager was concerned about this year’s team potentially not making the postseason.

And when the Titans went down 4-0 early against the Bulldogs at St. Thomas Aquinas, McQuaid was surely thinking his worrying was justified.

But 10 unanswered runs – seven coming via the bats of Brandon McCalla (three RBI) and Cole Habig (four) – and a solid relief outing from sophomore Nick Marchese helped Nova to a 10-4 victory, one that secures the Titans a postseason spot and a district championship game against St. Thomas on Thursday evening.

“This bunch of kids, I’m proud of them,” McQuaid said, after his team pounded out 14 hits. “At the start of the year, with no experience, young pitchers, I wasn’t sure if we would qualify for the state playoffs. But these last three weeks we’ve played pretty well. We just had to believe in ourselves.”

South Broward, who defeated the Titans 6-0 in their first meeting this season, got off to a fast start again just like they did in that February contest. 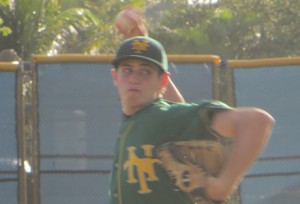 Nick Marchese was superb in relief for the Titans

Nova starter Nick Martinez was having early trouble, and gave up a first-inning RBI single to Colin Tindall as well as allowing Matt Cohick to score on a wild pitch.

Things didn’t get much better in the top of the third as catcher John Maginnis led off with a double to deep center field, with his courtesy-runner Mike Dunshee later scoring on a Cohick RBI single through the right side.

That was it for Martinez, but the Bulldogs (14-8) weren’t finished, as they added one more run when starting pitcher Ken Rasor helped his own cause with a one-out RBI single.

Unfortunately for Rasor, his four-run lead vanished in the bottom of the inning, as the Titans (13-7) suddenly keyed in on the right-hander.

Ruben Diaz led off with a double, Ryan Merante followed with a single, and then Kyle Pangallo walked to load the bases with no outs. Two batters later after a Gabriel Valverde RBI single and a two-run liner by McCalla, Rasor was done despite only throwing 56 pitches.

A bases-loaded walk to Habig made it 4-4, and then Nova took the lead when McCalla scored on a Ben Torres sacrifice fly. 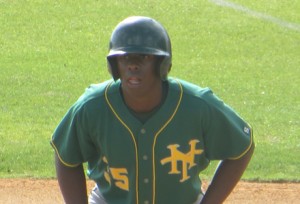 The Titans extended their lead in the fourth as Valverde knocked in Merante with a single through the left side, and then Habig provided the real killer blow with a two-run double.

Meanwhile Marchese, who threw four scoreless innings in Nova’s 1-0 win over the Bulldogs earlier this month, was cruising through the South Broward order with ease, locating his fastball nicely and finishing guys off with a wicked slider.

He allowed just one hit between the fourth and sixth innings, and even when the Bulldogs got to a him slightly in the seventh with three straight hits to lead off the inning, he settled down and ensured the deficit would remain at six all the way until the final pitch.

“I was feeling good, jumping out 4-0, but Nova is a talented, well-coached team, and four runs clearly wasn’t enough,” Bulldogs Manager Joe Giummule said after the game. “They just hit the baseball and we couldn’t get the big out and get out of the inning. To be honest, it was one of the better games we played all season. We had some good at-bats, did the small things well. If you had told me before the game we would score four times and get 10 hits, I would have taken that and think we’d be walking out with a win. It’s a tough day. Ten guys either played their last high school baseball game or their last baseball game tonight.”

Maginnis and Matt Cohick both had a pair of hits for South Broward, while Merante, Valverde, McCalla and Habig all had multiple hits for the Titans.