Pines Charter Cruises Past Hills, Advances To 6A-15 Final 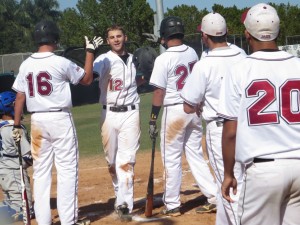 The Jaguars Cody Fuchs is mobbed by his teammates after his two-run home run during their 6A-15 semifinal victory over Hollywood Hills.

Pembroke Pines Charter came into this year’s district tournament with a sizzling hot lineup that had been tearing up opposing pitching.

On Thursday afternoon that fire just continued to grow, as the Jaguars stormed out of the gate to run away with a 16-1 victory over Hollywood Hills, in a 6A-15 semifinal at Mavericks Stadium at Archbishop McCarthy High.

The Jaguars (11-10) are now set to face top-seeded Archbishop McCarthy in Friday’s district championship, after the Mavericks edged Fort Lauderdale in the other semifinal played Thursday evening.

Pines Charter will also be playing in the regional playoffs that begin next week.

“This was a big win for us. When we played Hollywood Hills in the regular season, they gave us a tough game,” Jaguars Manager Carlos Iglesias said. “We prepared very well for this game and it showed in the way that the players came out here. Their hearts were into it.”

Iglesias credited his assistant coach, Willy Hernandez, in getting the team prepared by focusing on hitting line drives and keeping the ball on the ground.

“We had a great practice on Monday, and Coach Hernandez helped to get them to stay back and keep the ball out of the air,” Iglesias said. “One through nine, we had quality at-bats today. We didn’t chase any pitches and we were settling into the strike zone.”

To match their pitching, the Jaguars also got a no-hit performance from starter Patrick Mitchell, who went the distance in the five-inning contest that was shortened due to the mercy rule.

The right-hander improved to 2-3 on the season, while recording three strikeouts and issuing two walks and hitting two batters.

Pines Charter pounded out 11 hits in all, and wasted no time in staking their starter with a 3-0 lead in the bottom of the first inning on an RBI double from Jesse Gonzalez and a two-RBI single off the bat of Eduardo Espinosa. 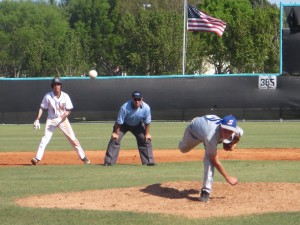 First baseman Cody Fuchs effectively put the game away with a towering blast that hit off the right field scoreboard for a two-run home run in the second inning.

Fuchs finished 3-for-3 with three RBIs and two runs, and Jake Jacobs was 2-for-3 with a double and three RBIs.

It had been a turn-around season for the Spartans (10-11) this year, and the team came into Thursday’s contest as the third seed in the district tournament looking for that upset victory that would have clinched a postseason berth.

Yet even despite the tough defeat, Hills Manager Charlie Cardinale had plenty to be pleased about after the way his team has come together and grown since he took over four years ago.

“I’ve got to take my hat off to all the seniors,” Cardinale said. “They went from not being able to get anything done when we came in that first year, and then they just worked their tails off every game, every day. They won some games this year and beat some good teams we had never beaten before. We felt pretty good about our chances because we played close games with everybody, but it just wasn’t our day today.”

For a young team on the rise, Thursday’s loss was a tough pill to swallow, and especially for the Spartans’ seniors who were disappointed to see it end on such a tough result.

But Cardinale is excited about how far the team has come, and particularly the example that has been set by this senior class that were his young freshman players back in his first season as manager.

“It’s very rewarding, and for these kids it was good to see how they took us to another spot,” said Cardinale. “They showed these young guys, a lot of them who had never played a lot of baseball, what it’s going to take to actually be competitive and be successful. I’m just real proud of them.” 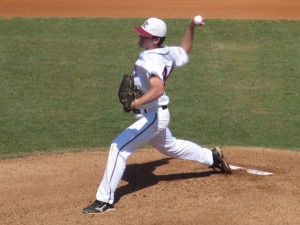 Hills showed the fight in them as the team battled back in the fourth inning to avoid the shutout.

Chris Hernandez and Frank Wells walked, and Tommy Grant was hit by a pitch to load the bases with no outs. Austin Hille then delivered a fly ball deep enough to center field to allow Hernandez to tag up and score on the sacrifice flyout.

But the rally would be short-lived, as Pines Charter escaped the inning on a line-drive out to Fuchs, and then sealed the victory with a 6-4-3 double play in the top of the fifth inning.

The Jaguars are now set to face the top seed in their district, the team who won the 6A-15 title last year on the way to its third consecutive state title.

But after playing them into an extra-inning game already this season, Coach Iglesias is confident that his team will continue to carry this momentum just a little bit farther.