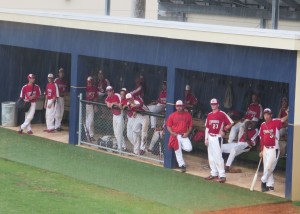 South Broward players and coaches wait out a rain delay that affected district playoff games across Broward County on Monday.

Massive thunder and lightning storms forced most of Broward County to postpone the opening day of district playoff action on Monday.

As each site has rainout days scheduled in for just such scenarios, this meant that in most cases each schedule has simply been pushed back by one day.

In some cases, however, there were further changes necessary.

In Class 7A at St. Thomas Aquinas, Plantation and South Broward had to halt play in the bottom of the fifth inning with the Bulldogs leading 7-4. That game will resume Tuesday at 5 p.m., followed by McArthur and Cooper City at 7 p.m.

Tuesday’s originally scheduled contests have been moved to Wednesday, and the 7A-16 championship has now been moved to Friday night at St. Thomas Aquinas.

A similar scenario played out at Archbishop McCarthy in 6A-15, where the championship game has also been pushed to Friday night. The quarterfinal game between Stranahan and Fort Lauderdale will be played Tuesday, and the two semifinals will happen on Thursday.

The other class 7A bracket at Monarch High has now been moved to Deerfield Beach High, so the teams can play a day-night doubleheader on Tuesday because the Knights do not have lights at their home field.

The 7A-15 championship will still be played as originally planned at Monarch High at 4 p.m. Thursday.

District 8A-11 simply adjusted its schedule by one day, but one important change is that Tuesday’s quarterfinal contests will now be played at nearby Taravella. The semifinals and championship will still be played at Coral Glades High as originally planned.