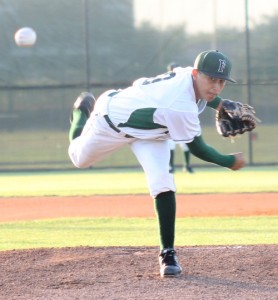 Alex Sarmiento threw a complete game shutout for the Falcons.

Some things never get old, and for the Flanagan Falcons, that means racking up district titles. The Falcons have dominated 8A-12 in recent years and won the district championship again Friday night with a familiar formula, strong starting pitching and timely hitting.

The past couple of seasons it has been West Broward that has been the biggest challenge to Flanagan’s dynasty, but this year, Cypress Bay defeated the Bobcats in the semifinals and came into the title game riding a wave of emotion. The Lightning proved to be worthy opponents, but in the end, Alex Sarmiento’s arm proved too much as the Falcons took home the crown 4-0.

Cypress Bay’s best opportunity of the night came in the opening frame, when Jacob Ehrlich and Juan Delaesprilla each hit one-out singles. Sarmiento was able to escape the jam with two fly-ball outs.

“We’ve struggled all year scoring runs,” said Lightning Manager Mike White. “But what we’ve been able to do is when we get chances, we have capitalized. Tonight, we had a chance in the first inning and couldn’t come up with the big hit. It was a good effort by our pitching and defense. We just were missing that big hit.”

Flanagan, meanwhile, was equally stifled at the plate for much of the game. In the fourth, the Falcons got their chance to come through during a rally, and unlike Cypress Bay hitters, the Falcons offense came up big. 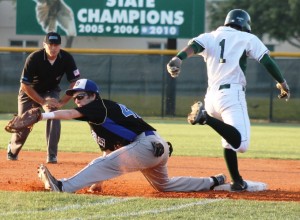 A close play at first.

Flanagan may never have had the chance to score three runs in the inning had it not been for a catcher’s interference leading off the inning. Ryan Dodge hit a ground ball out to the right side, but he hit catcher Devin Ramirez’ glove on the swing and was awarded first base. Kharlin Sued followed with a single, and Daniel Oliveri’s base hit brought in the game’s first run.

After a ground out, Andres Rios delivered the key hit of the game, a two-run single that extended the lead to 3-0.

“I’ve had a ton of opportunities like that this year,” said Rios. “Sometimes I’ve failed, and sometimes I’ve come through. So going up to the plate I was just thinking, ‘This is an opportunity, district championship, what’s better than this.’ I saw the pitch outside, recognized it, waited on it. and hit it the other way.”

That was all the offense that Sarmiento would need on this night. The right-hander scattered five hits, while pitching to contact all evening. The Falcons defense came up big behind Sarmiento, ending the Lightning’s final threat in the seventh with a double play.

“I felt real comfortable out there tonight,” said Sarmiento. “Coach Evans told me before the game to pound the strike zone, and just let your defense work. I have a great defense behind me, so all I had to do was pound the zone, and they took care of the rest.”

Flanagan will move on to host Coral Glades in a regional quarterfinal match-up on Wednesday evening. Flanagan was somewhat subdued after their district victory, perhaps because the standard around Flanagan has been set higher. 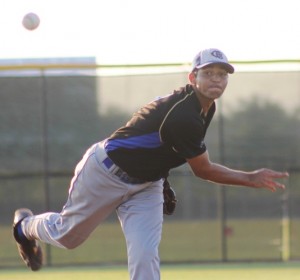 JR Bahder delivers a pitch for the Lightning.

“The guys enjoyed this one, but they know this is not the end-all for us,” said Falcons Manager Ray Evans. “We, just like every other team that competes, strive to be playing in the last game of the year, every year. You start the playoffs knowing you have to win seven games. We’ve got two down, and five to go…the expectation here is always to get to the final four, so while it’s been a good year, the next couple of weeks is what will make it a great year.”

Cypress Bay will travel to play Douglas on Wednesday afternoon. With the emotions running high for the Lightning, they will be trying to keep their magical season alive.

“It seems like the old Douglas teams,” said White. “Strong lineup, good pitching staff. It’s going to be a great challenge for us, but we’re looking forward to it. We’re excited. Our goal was to play in May, and here we are May 1st playing. So we’ll give them our best game and see what happens.”