South Broward Comes Back Over Plantation 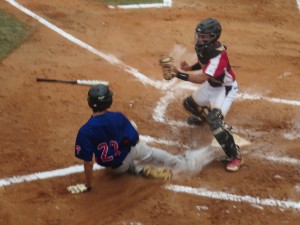 Plantation’s Sam Reich slides safely ahead of the tag from South Broward’s John Maginnis during a three-run first inning.

In a game that was originally suspended due to a lightning delay, the end result was just enough baseball was played for South Broward to advance with a 7-4 comeback victory over Plantation.

The two teams had completed four-and-a-half frames in the 7A-16 quarterfinal at St. Thomas Aquinas on Monday afternoon, and on Tuesday the game was declared official.

The Bulldogs (14-7) advance to face Nova in the district semifinal, Wednesday afternoon at St. Thomas Aquinas.

But it had been very close to being a shocking upset for the Colonels (2-17).

Plantation opened the contest with three runs in the top of the first, and after the Bulldogs answered with their own three-run first inning, they again retook the lead in the second.

“We didn’t have anything to lose, so there was no pressure on them,” Colonels Manager Neil Andreoli said.

Tyler Price took that advice to heart by swinging away at the opening pitch of the game and bouncing it to center field for the leadoff single.

Orlando Fallas reached on an error and Ryan Smith advanced the runners with a sacrifice bunt.

Sam Reich slapped a single to center that dropped into “no-man’s land” to bring both baserunners home. Jonathan Coval shortened his swing and blooped an RBI single into right field to send Reich across the plate.

In the second the Colonels got a single from senior Chris Yearsley, and Matt Costa crushed a shot deep to center field for an RBI double to send him home and put Plantation back on top. 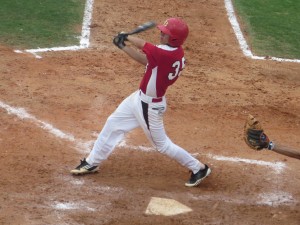 South Broward’s Matt Cohick was 2-for-3, and also picked up the win on the mound.

But after his team got the lead back, Bulldogs starter Matt Cohick tossed three scoreless frames over the next three, recording the final out in the top of he fifth inning just moments before the lightning sirens sounded to halt play.

Cody Behr pushed across the winning run for South Broward on a fielder’s choice groundout, as the team rallied in the bottom of the third for what would ultimately be the winning runs.

Cohick started it off with a single past second and then gave way to courtesy-runner James McDonnell, who scored on an RBI single when John Maginnis bounced one over third base.

McDonnell had two runs and a stolen base, and Mugione was 2-for-2 with two RBIs and a run.