St. Thomas Wins Big Over Nova In 7A-16 Final 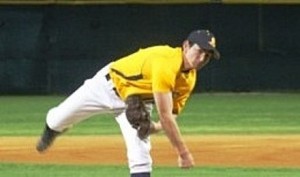 St. Thomas and Nova meeting for the district title has become old hat. What was different this year was St. Thomas dominating like it did Friday night.

Behind a strong pitching performance from Frank Rubio, the Raiders romped, 13-2 over the Titans for St. Thomas’ third consecutive win over their arch nemesis.

The victory gives St. Thomas (16-6) home-field advantage for its regional quarterfinal match-up Thursday against Monarch (11-8). Nova (13-8) will travel to Northeast (12-9), which won its first district title since the late 1990s Thursday night.

Rubio pitched five innings, striking out nine and walking three while giving up two hits and one earned run as he earned his seventh win for the season.

Alec Byrd and Ross Thibeault went 1-for-2 with two runs and an RBI, and Rafael Amanau went 1-for-2.