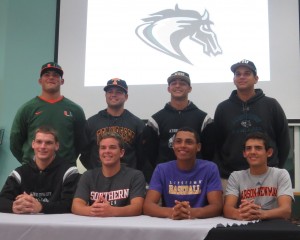 Seven members of the Archbishop McCarthy baseball team signed their college letters of intent on Wednesday.

For several of Broward County’s senior baseball players, Wednesday marked a pinnacle moment in their high school careers. On the opening day of the College National Early Signing week, a total of 15 locals inked their letters of intent to their college of choice. This once-in-a-lifetime moment was celebrated and shared with family, friends, coaches, faculty and peers through special ceremonies that honored the occasion.

“It’s a special time for the players and their families,” remarked Archbishop McCarthy manager Rich Bielski.

For a spring sport like baseball, most players tend to wait until April’s Signing Day before they officially solidify their college commitments. But others relish the chance to make their choice official and set their future destination now, rather than wait until during their senior season.

“It feels like a lot of pressure is off now and I can just enjoy my senior year,” said Nova’s Kyle Pangallo, who signed with Barry University. “I am really looking forward to going to college. I talked to Barry for about a year and I really like the coaches there, like Albert Destrade. It’s a great school. It’s great to be able to do this and share it with two my friends.”

Signing alongside Pangallo were fellow Titans Ben Torres, who signed with the University of Bridgeport, and Brandon McCalla, who inked his way to Bethune-Cookman University. Both Nova principal John LaCasse and Titans manager Pat McQuaid praised the players for their academic achievements and how that helped to improve their opportunity to play college baseball.

“It’s a great testament to follow your dreams and still keep academics a part of your future,” McQuaid said.

Joining McCalla at Bethune-Cookman will be Pembroke Pines Charter’s Danny Melgarejo, who is one of many other players who will sign during a ceremony later in the week. The fall early signing period lasts for a week long, and some programs opt to celebrate their signings on later in the year. North Broward Prep’s Mack Nathanson plans to sign with Wofford; Sagemont’s Brynn Martinez will sign with Quincy University on Friday; and University School’s Brendan McKendry will ink with Flagler College, while Adam Sinkoe is signing with Washington and Jefferson University and Fred Sultan will head to Winthrop. 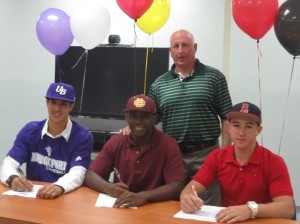 Monarch senior Andy Rohloff became the first player in the program’s brief history to sign an NCAA National Letter of Intent, as he is headed to Barry University. St. Thomas, a state semifinalist last year under first-year Manager Troy Cameron, also got in on the signing day action. Teddy Meissner, the Raiders starting catcher, signed with Rollins.

Each celebration is its own special occasion, a rewarding day that allows loved ones to realize the great achievements these student-athletes have accomplished. Players know their future and they can take a moment to enjoy the results of all their hard work.

In the case of Coral Springs Christian, watching four of their guys sign was very gratifying after the example they have set to earn this moment.

“They are the hardest working kids, and it’s good to see all that hard work paying off,” said Crusaders manager Matt Cleveland.

The team’s signees included Devin Meyer to Miami, Cameron Boniskie with St. Leo University, Benito Santiago to Tennessee and Eric Hepple with the University of Central Florida. The school held an early morning ceremony to allow the extended family to celebrate together. As the players have known one another and grown up together since they were all young children, it was a moment they dreamed about sharing together.

“For this to be happening and to be spending time with my family is really enjoyable. We made their day,” said Santiago, who admitted it meant the world to him to be able to take part in the moment with his teammates alongside him. “We’re all a family and there is a lot of togetherness at the school. Knowing we are all signing here together is big.” 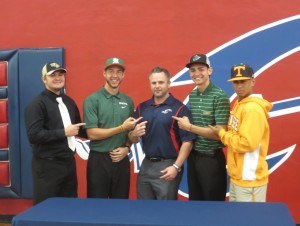 Archbishop McCarthy also knows something about being able to share it with a big group, as the team enjoyed a total of seven players who all signed during an afternoon ceremony Wednesday. The four-time defending state champions recognized each player individually, and allowed each a moment to speak and give their thanks. Then each took their turn to sign their letter of intent with their family sitting beside them.

The Mavericks signees included Alex Alfonso to Carson Newman, Michael Gigliotti to Lipscomb University, Brian Gonzalez with the University of Miami, Andres Nunez and Eddie Silva both with FIU, Ryan Sinzenich to Florida Institute of Technology and Aaron Soto with Tennessee.

The McCarthy players have thrived on enjoying special moments as they come, and Wednesday marked another big day in signing so many players from one class.

“It’s such a big moment because we can spend it with our families and spend it with each other,” said Sinzenich. “We’ve been playing baseball together since we were eleven, so it’s really nice to see how everyone has grown up and is now going on to college. We always want to stay together. We always pull for each other, so when a moment like this happens we are always so happy for one another. We know we are helping them to get where they want to get to and they’re helping us get where we want to get to.”

The Mavericks may still see several more members sign by the end of the year. With the season still far ahead, Wednesday simply marks the first day of many more like it for so many hard-working student athletes across Broward County.