Hollywood Hills Building Towards Consistency In 2014 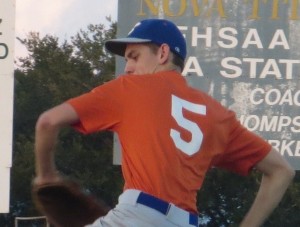 Hollywood Hills will rely heavily on veterans such as starter Jordan Hill to lead the way in 2014.

The Hollywood Hills baseball program is slowly heading in the right direction. It has been a grind for manager Charlie Cardinale to turn things around, and in his fifth season at the helm he is starting to see the fruits of those labors. There is a solid foundation in place now, and the 2014 campaign could prove to be pivotal in establishing just how far the Spartans have come as a team.

“They appreciate when other coaches come up and say good things and tell them that they’ve come a long way,” said Cardinale. “They really like each other and they have a good time together. They know if we work hard enough then we can really compete, and last year we saw a little bit of that.”

There are many positive points from a season ago that the team can build off of, and each small accomplishment has helped the club to rewrite recent history and work to establish a culture of success. The team managed to earn the third seed in their district tournament last season, which set up a more favorable matchup and kept them from having to claw their way out of the gate against the toughest opponent possible. Ultimately the squad fell to a hot-hitting Pembroke Pines Charter team in the district semifinals, but was still able to take away valuable playing experience in a game of that magnitude.

The Spartans also enjoyed several marquee victories last year, and that helps to bring excitement and enthusiasm for the returning guys who are eager to taste such well-earned victories again. The club finished at 10-11 overall, but enjoyed big wins over quality teams such as Fort Lauderdale, Piper, Northeast, McArthur and Cooper City.

“We were real proud of the win over Cooper City, and we beat McArthur for the first time last year,” said Cardinale. “We beat Fort Lauderdale so we were able to go into the district tournament as the three seed. We had some good guys last year and the kids now are very upbeat. We’ve got a lot of young kids that are going to have to come in and contribute. We’re looking for some seniors to step up and some of the young guys are starting to step up as well.”

There are many new faces on the current roster. The team graduated eight seniors from its program, and then lost two other players when they moved away from the South Florida area. The returning crop includes seven seniors, as well as many younger guys who also have decent playing experience. As a group they are very unproven, but the leaders have begun to emerge to set the example of what they want from each player.

“We have all these new guys, so leadership will play a big role,” said senior Danny Pena. “We are a scrappy team and we need to put some things together still, and now this is our turn to do it just like last year’s seniors did. I try to set the right example to always be on time, and to respect the coach. I’ve been on varsity since my freshman year and I’m more than comfortable and ready to speak now.” 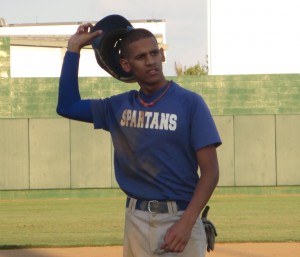 Senior Danny Pena has embraced his role as a leader on the young Spartans squad.

The primary area of concern for the club is in their defense, which remains a work in progress as they integrate many new starters into the fold to replace their entire infield unit. Pena moves into a central role as the team’s starting centerfielder, and after previously playing both shortstop and catcher for this program he appreciates the way he must guide the outfield unit much like the backstop leads the infield defense. With such a young group that is still learning what varsity play is all about Pena has discovered just how much communication it takes to mold these guys.

“I’m a senior now and I want to go all out, just have a fun year and try to finish with a record over .500 so I can have a good last year to remember,” said Pena. “These young guys can frustrate me, but they open my eyes too. I see them in practice and I realize how hard they hustle and I think I should be going even harder than them because this is going to be my last time on the field playing high school baseball.”

Cardinale expects that the offense will have to scrap together runs, but overall the hitters have vastly improved. Pena will also play a major role in the lineup, where he comes off a junior year in which he hit .360 and scored 17 runs. He will team in the middle of the order with fellow returning senior D’Andre Diaz, who led the team by hitting .367 and not striking out once in 49 at bats last season. Andy Flores, Jed Wilson and Chad Wright are other veterans looking to improve at the plate as they move into larger roles in the lineup. Nolan Boerner is one new guy that has begun to swing a big stick, while also settling in to contend for the starting catcher’s role.

The player’s ability to settle in quickly and become comfortable and confident in starting roles will determine many things for the Spartans. Most young teams do not begin to turn the corner and become contenders until they believe that they can achieve such success, and the Spartans coaches are supportive in building their guys towards that. Cardinale has a strong support staff in assistant coaches Clinton Tommie, Joe Healey, George Swift and Phillip Chen, and the player’s close relationship with their coaches has made the process of working with so many younger players that much easier to cope with. The level of trust is high and the players have proven to be very coachable.

Another positive step that helps Hills begin to function like most other area programs comes in their plans to compete in a Spring Break tournament this season. The Spartans will travel to a tournament in Gainesville, where they will get a chance to bond on a road trip together and then face some very competitive programs.

“It’s a great cultural and baseball experience, and the Spring Break trip is something that the guys never stop talking about,” Cardinale admitted. “For some of these guys it will be the first time they ever leave the area.”

Establishing this as a yearly tradition is another move that puts them on par with the other local teams who all use the same method with their clubs.

The team understands that they must have reliable pitching in order to compete in a tournament environment such as during Spring Break and also at the end of the year in the district playoffs. While this is still an area that is a work in progress, recent progress has been very positive. The team is deeper on the mound than in recent years, and they have also seen some exciting possibilities from the new guys joining the mix. 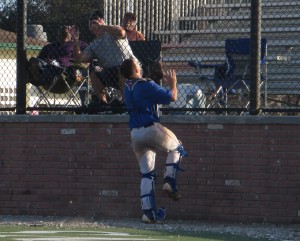 The Spartans need their guys to be willing to run through the wall for the team, as catcher Nolan Boerner exhibits in chasing this foul ball.

The Spartans are fortunate to have a guy who is willing to step up and ask for the ball for the big games, and that leader is senior Jordan Hill. The right-hander saw plenty of action last year and has returned to the hill determined to be the anchor of the staff.

“I want to be dominant,” said Hill. “We have a defense that is just starting to grow so I know I have to step it up with my pitching. I have to hit my spots more and not just give fastballs down the middle of the plate. I want to carry the team and be the guy to get those big wins. I have done a lot of long-toss and have changed my arm slot, and now I can throw my curveball much better. I am becoming more confident and I am ready to be that guy for this team.”

Hill has done wonders to help set the tone for a rotation that is very unsettled behind him. Newcomers such as Stephen Richards, Manny Lebon and Justin Braden have shown improvement as they work to earn playing time alongside other returning hurlers such as Pena and senior Sammy Roman.

Another sign of the gradual improvement of the program comes in their increased ability to defend their home field. The team went 8-3 at home in 2013, and has posted a 13-7 home record over the past two seasons. The Spartans’ home field does not feature any lights, which means all home games must be played before sundown. The team has shown more energy and enthusiasm on their own field, which is all any coach can ask from his club.

“We like playing at home. There is something about afternoon baseball that is really nice, and the kids really like it,” said Cardinale. “We’ve been fortunate to get some good quality games there, and even against tougher competition the kids play tough at home. We want to be able to beat the teams we’re on a level playing field with, and then against the top clubs we want to stay in the contest and take it seven innings and make them work for it. We just have to hope we can play the defense. Its better, but we’re not there yet. The kids are responding though.”