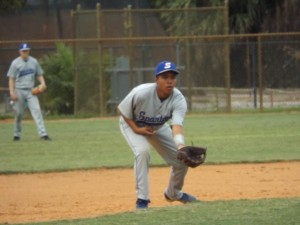 Playing fantastic at third base for Hollywood Hills was D’Andre Diaz who had a few hits and scored twice.

The Stranahan Mighty Dragons are faced with a challenge nobody likes to approach head on. When a starting lineup is built up of a majority of sophomore’s and junior’s, sometimes a lack of leadership, less reps taken, and little experience tend to show on the field.

Taking over in his first full year as Manager, Stranahan’s Marc Iannatto has brought light to the players eyes. Iannatto will have most of his team returning for the next two to three years, as he see a bright future ahead for his team. They also know there will be bumps in the road along the way.

Able to overtake the young Mighty Dragons Monday afternoon by a 9-6 final, the Hollywood Hills Spartans took advantage of every opportunity given to them. Execution of “hit and runs”, “sac bunts”, and “right-side hitting” were performed to a ‘T’ by the Spartans.

“They hit the ball better today,” said Spartans Manager Charlie Cardinale. “We’ve been in a little funk as far as hitting. We have been waiting until the last inning before we get any hits, but they did a better job of doing that today.”

Iannatto will be putting the ball in the hand’s of senior Chris Ford at every chance this season. Being one of the few senior’s on the team, Ford will not only give his team inning after inning, but he does it at the plate also. Ford went 3-for-3 with a walk and two runs scored to prove he is capable of shouldering the large role he is entrusted with.

“Chris Ford did an awesome job today,” said Iannatto. “He is going to give us strikes, not going to walk guys, and make them put the ball in play. That’s exactly why he is my number one guy, and he can go long innings when asked to.”

When asked about the rest of the team’s performance, Iannatto said “the hitting from these guys was decent in this game. We came from a team where last season we had 2 hits in a game, and that was great for them. Now were getting six, seven, sometimes eight or more. Next we need to transition and when we get hits, now the base running needs to kick in. It’s a lot of undertaking but at the same time its me being in game situations and I see what they need to do, so moving forward in practices, I can make the proper corrections.” 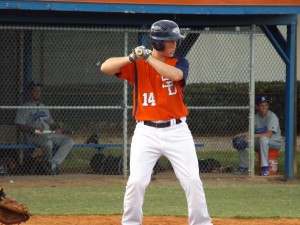 Chris Ford went 3-for-3, scored twice and threw a complete game for Stranahan.

Danny Pena led the game off with a single. Pena went 3-for-5 on the day, with a double, and three runs scored giving his team an early spark.

It can be hard to not only teach aggressiveness, but to then actually have your players be aggressive in a game-time situation is almost far fetched. The ability to teach something that is within a persons inner self is a job that many can’t do. Hollywood Hills Manager Cardinale felt satisfaction throughout the game, as his team never let up that aggressive mind-frame.

To put the ball in play, steal bases, stay patient at the plate, and force the other team to make the mistakes, Hollywood Hills improved to 3-1 on the season. Little by little, inning by inning, tacking on one here, one there, they ended the day with nine runs on 11 hits. Wilson went 2-for-4 with a double and two RBIs. He scored in the fifth to give the Spartans an 8-2 lead.

In the home half of the fifth, the Mighty Dragons put pressure on the Spartans. Sophomore Kenny Stanley started the fifth off with a double to deep right-center field. Chris Ford hammered one of his three hits up the middle to give the Dragon’s runners at the corners. After a walk and single, the score was 8-3 and Spartan Manager Cardinale went to the bullpen. 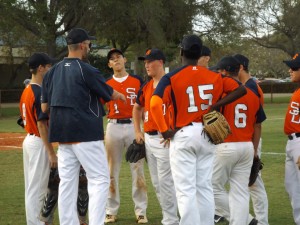 The next sequence of batters watched as their team cut into the lead without a swing of the bat. Walking three straight times, the Dragons only trailed by two runs. Turning back to the bullpen, Cardinale brought in Nolan Boerner to stop the bleeding. Bases loaded and nobody out, Boerner and the Spartans faced a big challenge. Momentum on their side and rally in full effect, the Dragons had the top of the lineup coming to the plate.

Storybook endings and championship teams have one thing in common in sports: defense. Pena showed off the Spartans defense by starting a rare triple play. The Dragon’s Austin Ford lined a shot to center in setting the play up perfectly, as Pena waited for the ball to fall from the sky. Securely catching the ball first, the runner at third tagged. Pena threw a rocket on a perfect one hop bounce to Wilson for the second out of the play. Hesitating at second base to tag, Logan Castellon was caught up between second and third, and the Spartans were able to complete the triple play.

Sometimes perfect plays are set up at perfect situations, it’s just a matter of if the play can be executed or not. Monday was all about executions for the Spartans, who look to continue their winning ways in tough district games ahead.