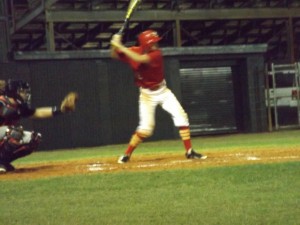 Cohick getting into motion before he lines his second double of the game.

Throwing strikes and getting batters out seems to be easier said then done these days. Coaches always stress to pitchers “let your defense work” or “no free passes.” Michael Cohick of South Broward made something that is hard for many high school pitchers look very easy Wednesday evening at Deerfield.

Throwing strikes, getting ahead in counts and not walking a single batter all night was just half of his contribution to the victory over Deerfield Beach Bucks 4-1. Cohick helped himself out on the mound, by recording a couple of hits and scoring two of the four runs for the Bulldogs. At the plate Cohick was 2-for-2 with two doubles, two runs scored, a stolen base and a walk.

Cohick was equally lethal from the hill, as he dealt a complete game, allowing one unearned run to score while striking out eight.

“All I wanted to do was just throw strikes, actually make my team work, and they did,” Cohick said. “I had a lot of help from my defense and I was proud of that. Curve ball was on, and I just felt good out there.” 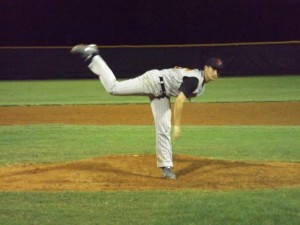 Matt Simons goes the distance in the loss despite waiting out a minor lighting delay.

The Bulldogs capitalized on early mistakes by the Bucks to jump out to a 2-0 lead in the first inning. After settling down, pitcher Matt Simons dialed in, and started recording outs by the bunches for the Bucks.

Midway through the fourth, with both pitchers cruising, a lighting delay was issued and play came to a halt. Not allowing the delay to end their outings, both pitchers returned to the mound.

After coming back from the delay, Cohick not only gave up his first hit on an infield single to third base by Conner Kelly, but allowed his first base runner of the night. Matching pitch for pitch, Simons was keeping the Bulldogs off of the bases until Cohick came up in the fifth with two outs, and started things off with a double down the left-field line. Kenny Rasor and Vince Evans both drove in a run in their next at-bats.

The Bucks are a young team, making improvements on a daily basis. While not coming out on top on the scoreboard, all was not negative for the visiting club. The defense played stellar, and the pitching was above average. Although the bats didn’t show up at South Broward Wednesday night, Bucks Manager Angelo Trento is sure they will find them soon. 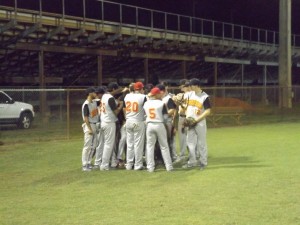 The team gathers together trying to build momentum for a late inning comeback.

“We’re just struggling at the plate right now is what it boils down to basically. We will pull it around, we can hit. We have proved we could hit in our first few games leading up,” said Trento. “Pitching did great, Simons pitched six full innings, 84-85 pitches. That is a great outing considering his first inning he struggled. For the most part we’re a young team, we’re getting better everyday, and well keep plugging away at the plate.”

On the other side of the field, while happy with his team’s victory Wednesday, Manager Joe Giummule wasn’t completely pleased with the overall performance.

“A win is a win, we’ve talked about winning ball games ugly, winning games pretty, we just want to find a way to win as many games as possible. I wouldn’t say I’m satisfied with the way we played today. We missed signs, we didn’t execute, and we made a few errors,” said Giummule. “We talk about the little things to win ball games, and we didn’t do enough of them today. Luckily we had a pitcher on the mound that threw very well today. If we don’t get that performance the game is flipped around.”