Deerfield Ready For A New Era Under New Manager Trento 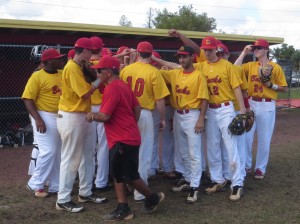 The Bucks return united as a team and intent on reversing their recent misfortunes.

The Bucks want the rest of their district to know that they are not pushovers. When teams take the field to play them, the Bucks want them to know that they are in for a battle. Deerfield wants to be known as a team that plays to the last out of the seventh inning, as a group that doesn’t give up, as a squad that is always giving everything they have in order to win every game.

Deerfield Beach is a school that is known for its pride, and this year’s baseball team is eager to be accountable and help restore some of that “Bucks Pride” to a program that has struggled mightily in recent years. Starting in the fall, Manager Vince Tozzi brought the group together and challenged them to change things to head in the right direction. The players quickly bought in and began working harder than they ever had before.

Heading into the spring Tozzi was blessed with the opportunity to hand the reins over to a new manager in Angelo Trento, and it has already proven to be the right decision for the program. Trento brings the right mindset to the job, and together the team has quickly embraced their chance to write a better tomorrow.

“We are setting our mind straight to our goal, which can be winning five games or winning districts,” said senior Austin Soeder, who is a four-year starter on the club. “We are getting the mentality to go big or go home. It would mean a lot to us seniors to go out with a humungous bang, because we haven’t had that chance in a while.”

The Bucks are coming off a season in which they finished 5-15 and missed the district playoffs. Now they welcome a new manager who has lots of experience from his days coaching at Pope John Paul II, Spanish River, Boca Raton and Purdue University. Trento is also a martial arts expert, and this skill set is something that he has learned to translate into the baseball world as well.

“From what I understand, they would get down on themselves last year. That’s gone now,” said Trento. “Now we have a winning temperament. We drill hard, we practice hard and I’m confident that these guys are going to do the best they possibly can with the skill level that they are at. Baseball is a game of failure and things are going to happen. The mechanical part we can fix. It is the mental part that we are trying to drill into them the right way. Be in the right place at the right time and you will do your job.” 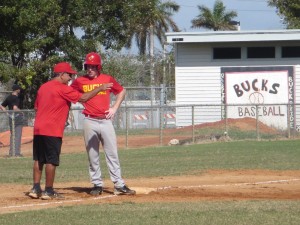 Manager Angelo Trento has earned the players respect, and they are following direction and buying into Bucks baseball.

Although Trento is not able to teach his players how to drop-kick an opponent or beat someone into submission, the mentality of a martial artist is something that translates very well in baseball terms. Above all else, success in either of those two things requires the drive and discipline to push yourself to achieve the goals you have set. Ever since Coach Tozzi laid down the law and challenged the team to strive for a new identity, guys have pushed themselves above limits they never even knew existed. Once Coach Trento came aboard, that level kicked into overdrive.

“Coach Trento makes us more aggressive,” said senior Aaron Johnson. “He likes to get technical with most stuff, because martial arts are like that too. So we have to practice as hard as we can and show it on the field.”

Deerfield graduated just four players this past season, which means they return a lot of guys with varsity playing experience. Although the results have not always been terrific, it has still created awareness and understanding among the players in knowing what they are in for. During the fall the team started showing a sign of their turnaround in playing competitive games against some of the top teams in the county. Confidence is being built around every positive step the players take.

“Those starting freshmen are now starting as sophomores,” said Trento. “They have seen a year of varsity; they know the speed and the intensity of the game at this level. But they are still young too.”

The area where the team has seen the biggest improvement is in their pitching. The club struggled on the mound last year, but still returns half of that group. Starters John Grassi, Kyle Miller and Matthew Simmons all return with another year of valuable experience under their belts, and the team has seen much promise in some of the newer guys such as sophomore Dalton Williams and freshman Rafael Santos. Trento admits that the staff as a whole is right where he expects them to be based on the experience they have.

Miller and Simmons are both juniors with a lot of promise, grit and ability. The team knows they can build around these two hurlers for the next two seasons, and that is a big part of the plan. Simmons led the staff in 2013 with 26 strikeouts in 21 innings pitched.

The Bucks will also lean heavily on their experienced lefty Grassi, who figures to get the ball in the biggest games throughout the year. It is a role that the southpaw admits he enjoys, and he is excited to be a part of the formula that turns things around at Deerfield.

“We have a new coach that has created a path to success this year,” said Grassi. “Hopefully I can shine this year. I love pressure situations and I trust the players behind me. Our whole team is based on defense. We have the pitching to get through and the defense has to be big. We strive to achieve our greatest potential.”

The defense is the strength of the unit. Even though the players are young, they handle the ball well and they are getting the idea what is expected of them defensively. Trento admits that their overall ability to play defense allows them to have backup plans in place for when the main plan goes awry.

Be it Plan A or Plan B, the Bucks realize that no matter what else happens they simply have to produce more offense if they are to compete this season. The team has spent a lot of time drilling and hitting in the cages, as they look to improve on an offense that struggled heavily a season ago.

“We have a lot of young players who are decent, and that know what kind of approach they want to go with,” said Soeder, who was the team’s leading hitter of all the returning veterans. “I am just trying to set the right example and be a good role model for the younger guys. I do the hardest I can and hope for the best, but yes I do want to go out with a bang this year.”

One change that has already been made for this season is that the team will travel to Georgia for a baseball trip during the season. Veterans such as Soeder and Johnson, both of whom have been on the team for four years, are excited to bring back a tradition that had stopped the past few seasons. 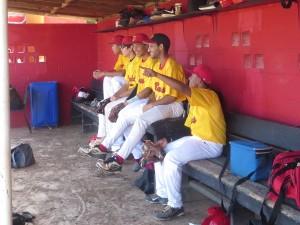 The Bucks are a close group who enjoy their baseball experiences together.

“It’s nice to start that back up again, and it’s big to me since we didn’t do that the past few years,” said Johnson, who can still recall the great memories he has from previous trips earlier in his career at Deerfield. “We all get to hang out together at night and play video games, we get up early and eat breakfast together, and then we hang out during the day and go bowling or something. We are always with each other and it is fun to be away with the team like that.”

This change is but a minor reflection of the larger changes set to come in the time ahead. Trento admits that the program has short, mid and also long-term goals, and a road trip as a club is just one small example.

The biggest goal the team has set this year is to represent itself come time for the district playoffs. The Bucks went winless in their seven-team district last year, which cost them the right to even compete in the district tournament. Therefore, the top priority is to make it there and then show the other teams in 11-8A what they are capable of.

“We want to be a part of that,” Trento said. “We want people to sit up and take notice. It’s a process and these guys know that. We have support from the parents and the boosters, and the guys know we are going to be battling to get there. We have to make other teams earn it to beat us, because we are going to keep coming at them.”