District 2A-14 A Unique Situation 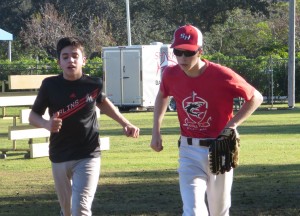 The Sharks are counting on veteran leaders like Will Marsh (left) and captain Kyle Haskell to lead the charge.

There is a big advantage for the two teams in District 14-2A. Since they are the only two clubs in the district, both Posnack and Sheridan Hills will automatically play in the district championship, and advance to the regional playoffs. They will face each other but once all year to decide which team will be the higher seed for this contest, which will give them the right to hit last as the home team.

This situation allows the clubs to use the entire regular season as a learning experience to prepare for the playoffs.

Sharks Manager Tim Talpesh intends to utilize this season to tinker with guys in various ways, to adjust lineups and roles in a less orthodox fashion. Seeing how guys respond to different opportunities will help them develop their identity as a unit. Along the way, the team will build the chemistry they need through the natural atmosphere that exists within their squad.

“We’ll have fun, but we’ll work hard,” Talpesh said. “They make my job a lot easier because they have their faith based and their futures lined up in a good way. It isn’t only worrying about baseball or worldly things.”

The Sharks have scheduled their games in a way to help keep guys fresh and healthy all season, since they do not enjoy the depth advantage of most large schools.

There are two things that Sharks Manager Tim Talpesh preaches to his players. The third-year manager understands that his guys cannot always control every bounce of the ball; they cannot control whether they will catch the ball or hit the ball every time they try. But there are two things that they can control, and those are what Talpesh reminds his players to remember in every thing that they do.

The Sharks are taught to always remember who they represent, and to also give maximum effort in everything that they do.

“It’s not a right to be on the team; it’s a privilege,” said junior captain Kyle Haskell. “From being a freshman and earning my way onto the team, I have learned to just try and emulate that and keep my way.”

Even though it is a young team at a small school, and although they have a different mentality than a lot of programs across the county, all playing time is still based upon the guys’ ability to adhere to these two core principals.

“They must remember that they are not just representing themselves, but also their school,” Talpesh said. “We are a Christian school of high character and high class. Even if the kids do not have their faith lined up yet, we still preach to them that when they are out here that is what we expect of them. We also want their best effort. They may not be able to make every play, but they can control how much effort they put in, and how much they hustle.”

It is a very coachable group that makes up the Sharks’ program. They understand that baseball is not something that any of them are likely to make a career out of, and they simply enjoy the time together that they spend with their friends and teammates. The fact that it is fun is part of what keeps the guys coming back out there. They are together like a family, and this helps Talpesh embody his role both as a teacher and as a coach.

Like any team, Sheridan Hills wants to win and they want to be successful. At the same time, it is a group of self-aware players whom understand that none of them are the reincarnation of Joe DiMaggio. They realize that God gives them the ability to play the game, even if they are not all blessed with the ability to dominate at it. Players embrace what they have and relish the chance to harness the talent they do possess.

“We can win and succeed, but they still look at it as their time for fun and the time to enjoy it while they work hard,” Talpesh said. “We do have a good time and joke around a lot, and it helps to keep guys enjoying things even when they have to put in the hard work.” 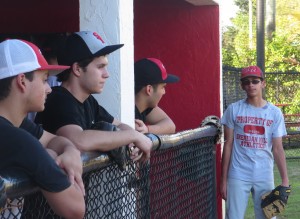 The Sharks always make sure to enjoy themselves whenever they are on the baseball field.

The Sharks are a young team coming off a 5-12 season, while playing for a very small school that has a limited pool of available players. The team graduated five starters and returns just one senior, and they understand it is a challenge to contend against teams that are loaded with more experience and depth.

“We know our team, and we understand,” said sophomore Will Marsh. “We try and we want to win, but even if we don’t we will still field a smile because we’re playing baseball.”

Jean-Carlo Cintron is the only senior, and while the team respects the need to give their all and aid his final season, they also understand it is a long term goal for the program overall. With so many young guys still getting their feet wet and set to be here for years to come, the primary goal is to develop these young guys and work to keep them in the program.

The younger squad can be molded into what the coaches see them becoming. It is a work in progress, but is a blessing to know that they will have guys coming back even after this season is over.

Veteran leadership has been crucial for this group, and they get a lot of that from both Marsh and Haskell.

“I definitely have some legend to live up to following the previous captain, Thomas Davis,” Haskell admitted. “It’s a great honor to be named the captain and I’m certainly not going to waste it. I’ve learned to keep a steady head and a clear line of thinking. I’ve seen people let anger get the better of them and it affected their play. I try to keep a steady mind and if I make a mistake, I make a mistake.”

It has been important for the team to have leaders on the field, especially with some guys still getting into the swing of things coming off of winter sports. Jason Katcherside is another veteran that the team depends on, although he is one of five guys who also play basketball at the school.

The five players who graduated from the program this year also made up a good bulk of the team’s pitching staff. Even though he is only a sophomore, the right-hander Marsh has inherited the lead role for the club. He likes this role and is confident in his abilities. Marsh worked on getting stronger in the offseason, as well as working to develop new pitches.

Talpesh notes that Marsh’s velocity has improved and his movement has also gotten better. As long as he is not overworked, he will see the bulk of the action.

“The six foot tall guys are all gone, so I guess Mr. 5-Foot-7 needs to step up now,” joked Marsh. “I spent the offseason lifting weights and the drop three is not like swinging a piece of iron anymore. It’s a little more controllable. Before ninety feet felt like a football field, but now it only feels like half of that. I’m still not fully grown yet, but I can get it over the plate now.”

Marsh also provides presence and character for the team. He is confident and gritty, and he wants the ball in the big pressure situations. It is a big lift to the team’s confidence having a starter who has logged varsity inning and who is not afraid to attack the batters.

Sophomore Hunter Boyle has also emerged to provide the Sharks with a nice left-hander to compliment their ace. The southpaw Boyle saw spot duty last year, and has developed well as he worked on his mechanics for an extended role this season.

“When he gets ahead in the count, he is very difficult to hit,” Talpesh said of Boyle. “If he can get the ball over the plate, he is a lefty with a little movement and he can get kids out. We are looking for good results with him on the mound.”