South Florida never seems to disappoint when it comes to perfect nights for baseball, and tonight at Cooper City High School was no exception. Clear skies, a cool breeze and the smell of the grill brought two competitive teams in Cooper City (3-2, 0-1  8A-12) and Piper (2-4, 0-1  8A-12) together for an district showdown.

In a district containing five teams, all of whom could make playoff runs this year, Wednesday night’s district play between these two ball clubs was as important as any game. Fundamentally, the Cowboys could not have been more perfect. Their timely hits, shutdown pitching, and solid defense lead Cooper City to a 7-2 victory over the Piper Bengals. 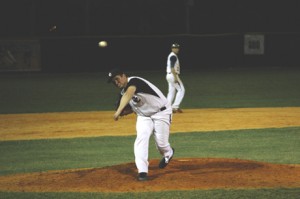 The Bengals came out swinging the bats in the first inning and scored one run on singles by Michael Cuminale, Ryan Taylor and a double by Ryan Rottman.

Cooper City answered back quickly in the bottom of the inning. The Cowboys saw a lot of pitches, and worked counts on Piper starter Chase Perry. Nicholas Saltare and Cole Kantor hits tied the game at 1-1.

Although Piper had a productive first inning, Cooper City starter Johnny Haney settled down and threw shut out baseball through the 5th inning. The Bengal bats fell silent as the Cowboy tacked on runs in every inning but the fifth. Haney worked quickly through counts and capped his evening off at 88 pitches through six innings of work.

“I was trying to get ahead of batters tonight. They have a few good bats on their team, and my approach was to get ahead of the them tonight in the count. I got a lot of ground balls and defensive help and we came out the win in an important district game,” said Johnny Haney of his outing.

In the second, Cooper City center-fielder, Philip Tomasulo led off the inning with a towering solo shot to deep left-center. It was the first home run of his baseball career, and set the tone for the rest of the night for Cooper City’s offense.

“I was trying hit a line drive and just get on base, it’s all I was thinking about when I ran in to lead off the inning. I took the first pitch up, and than the second pitch I hit out for my first home run of my life,” said Tamasulo of his at-bat. 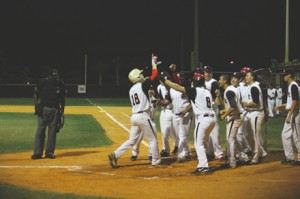 Philip Tomasulo is greeted by his teammates after his solo-homerun in the 2nd.

Cooper City added 2 more runs in the 3rd on three walks and two errors. A Piper pitching changed brought in side-winding lefty Ryan Rottman.Three more timely hits from Johnny Haney, Nicholas Saltare and Hunter Kelly brought two more runners across the plate for the Cowboys. The Cowboys fared extremely well with runners in scoring position and put themselves in positions to score runs throughout the evening. Cooper City manager Wayne Stofsky, in his second year, preaches three things with his program.

“We stress three things here that we consistently we have to do to be successful. Good pitching, in the complete game by Johnny and his 88 pitches, good defense, which we exhibited all night, and timely hits. Said Stofsky on the approach to tonight’s game. “We had a lot of big two-out hits with runners in scoring position which we didn’t get the last two games and it was great to have tonight.”

Defensive mishaps added the last Cooper City run in the 6th before Piper made their last dent. A lead-off single by Ratin, followed by a Reinhard single and an error brought in one more run for the Bengals as they would not go out silent. They put the ball in play all night but the Cooper City pitching and defense were too resilient.

“We were down and we kept fighting, and that’s what we’re looking for against the teams in this district. It took us awhile to get going, and I feel that this team in the long run is going to surprise a lot of teams.” Said Bengals Manager Donovan Collins of tonight’s loss. “Our pitching was going to be our strength and it’s now something we need to work on. We lost a couple pitchers unfortunately. Our defense is important and without the couple errors we had tonight, the end result would’ve been different.”