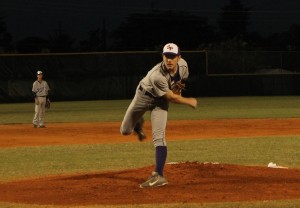 Mike Mele picked up six strikeouts in the complete-game victory for the Paladins Monday night.

Even after a tough loss, the McArthur Mustang could not help but stay true to himself and stay upbeat and positive for his team. Although he was a quiet person, he was well liked and a friend to every member of his squad. Even though he said very little, he left a powerful message behind.

Santiago graduated after last season, and a few days later he passed away in his sleep from an undetected heart problem. It is a loss the Mustangs still feel, and on Monday evening the team paid tribute to their friend and teammate by celebrating his life and retiring his jersey in a special ceremony held on the field prior to their home contest against South Plantation.

The guy who would likely have shied away from so much attention was given great tribute by the Mustangs family. The players unveiled special banners in both left and right field to honor Santiago, they released balloons in his honor, and senior Brian Rodriguez gave a speech about his friend. Santiago’s grandfather threw out the ceremonial first pitch.

“It was a great honor to give that speech. Me and him made the team together his sophomore year and my freshman year, so it was really great to speak about my friend,” Rodriguez said. “Carlos was a great kid. He was always making jokes and always making us laugh. You may not have known him, but just one conversation and he would have had you laughing and just rolling in the dirt. He showed very much passion on the field.”

Riding the emotional lift of such a special occasion, McArthur delivered a valiant and passionate effort before ultimately falling 8-3 to South Plantation. The Paladins (1-2-1) stormed back with a big seventh inning to score the comeback victory, their first of the season. South Plantation overcame a two-run deficit by putting seven runs up with their final swings.

“We have been struggling at the plate, so to finally put some runs on the board was a nice feeling,” said Paladins Manager Ryan Manuell. “It took us until the seventh inning to finally start swinging the way we’re capable. We put all those runs up in the seventh, but that was what I was expecting all along. But this is a good win for us. We go into our first district game on Wednesday and we needed a little bit of positive momentum to get ready for districts.”

Aaron Sigal delivered the winning hit when he rolled an RBI single past first base to score Josh Matos with one out in the seventh. Matos had reached on a two-RBI double to left field that tied the contest at 3-3 as both Andy Huegele and Tyler Hudson came across the plate. Starting pitcher Mike Mele also delivered a big two-RBI single to extend the lead. 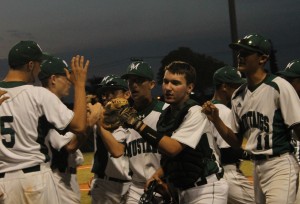 The Mustangs celebrate following a big catch by Kory Wilhoit that set up an inning-ending double play in the first.

The Paladins came into the contest playing only their second game under their new manager Manuell, following a recent coaching change. While the players and their new staff are still getting to know each other, Monday’s victory brought their first big positive moment together.

“It’s always good to get that first victory,” said Mele, who earned the complete-game win on the mound. “It’s nice to have something positive to build off of, and it is still only our new coach’s second game. We’re still feeling each other out right now, but we have faith in Coach Manuell and he has faith in us.”

While South Plantation earned some positive momentum, so too did McArthur begin to find its way on the field. The Mustangs (0-4) shook off the frustration of some close early-season losses to deliver their best performance thus far. With a team returning just one veteran position player and starting several freshmen on defense, there have been some growing pains.

“This is a bunch of good kids and they work hard, but they need experience,” said Mustangs Manager Brian Clark. “We’re learning by fire. We’ve had two games in a row that we had leads in the sixth or seventh inning and we gave it up. We need to learn how to win. I think once we get one under our belt it will help to straighten us out. But again we have to stop doing them favors with errors; we had a few and they just snowballed in the end.”

Even in defeat, the Mustangs could not help but lean on Santiago’s example to help them carry through this difficult start to their 2014 season.

“Even after a hard loss Carlos would always keep his composure, talk laugh or listen to music,” said senior K’Lani Martinez. “That was something that he had on you, was that he would always lighten you up. He was a light in a dark room, and it was really hard for us to play right here this day and he’s not watching us. We had some returners here from last year, and to not see his face hurts. It’s hard for us, just the starting for the game, going to unveil the number 35 in right field, and two of our friends going to unveil the banner in left field.”

The Mustangs carried those emotions onto the field at the start. Tyler Hudson was hit by a pitch and Steven Seager popped a one-out single into right field in the top of the first. But centerfielder Kory Wilhoit made a great diving catch on a shot from Sigal, then popped up to fire the ball to second base for the inning-ending double play. For a McArthur squad that has been plagued by errors early on in the season, the big play worked to excite the home team.

That excitement carried over in the top of the second too. Jose Fernandez drew a walk and Jarrell Franklin ripped a shot that ricocheted off starting pitcher Brandon Buchanan’s glove for a two-out single. But this time it was K’Lani Martinez coming up big as he chased down a squibbler to left for the final out that ended the threat. Wilhoit added another highlight-reel catch in the third, as the teams played a tough scoreless contest into the fifth frame.

Fernandez led off the fifth by rolling a single up the middle, and after Huegele reached on an error, Hudson found a hole through the left side to drive Fernandez home with the first run of the contest and a 1-0 advantage. 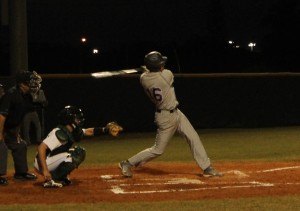 The Mustangs answered right back in the bottom half of the inning. Aaron Ward drew a walk and advanced to second on a single from Jack Bermudez, and then stole third to get within ninety feet of tying things back up. Estaban Garcia helped complete Ward’s trip around the bases by sending a bouncer into the left field gap for the tying RBI single.

Anthony Cruz followed with a roller to nearly the same spot in left field to send in Bermudez and give McArthur their first lead of the game. They added another run in the sixth when Wilhoit reached on an error, advanced on an infield single from Jorge Alvarez and scored on an RBI single off the bat of Daniel Santiago to go up 3-1.

“We played great in the beginning; we came back after we were losing 1-0 and took the lead into the seventh inning,” said Clark. “We just have to keep your nose in it and keep working hard. We aren’t going to get out of it by putting it on somebody else. We just have to get better.”

After his team stormed back to give him the lead, Mele returned to the mound in the bottom of the seventh to close out the victory. Even though McArthur was able to put a pair of runners on base, the right-hander was able to focus and seal the win by recoding his sixth and final strikeout to end the contest.

Mele admitted afterwards that he began to work ahead of himself in the end, before he settled in and focused to make sure he finished things off right.

“You just want to throw hard and fast and shut them down quickly,” said Mele. “I was just trying to get them out as fast as I could.”

Mele gave his club the big-game performance they hoped for, as he pounded the zone in throwing 63 of his 93 pitches for strikes while allowing just two earned runs on six hits and two walks.

Prior to the start of the game, Mustangs starting catcher Brandon Frantz remarked that he felt this game could help to be the turning point to their season. While the outcome was not what they were hoping for, the chance to honor their fallen teammate worked to bring the squad together. On this night playing the game meant more than just baseball, and this struggling group was reminded of this while paying tribute the only way they know how.

Carlos Santiago will forever be linked to this team, and his example shines more than just in his banners hanging on both sides of the outfield.

“His composure was great. On the field and off the field he would be your friend. He taught me to always laugh and to always have fun,” said Martinez. “We always had fun in the outfield. When we were taking pregame, we were always laughing. He was a great guy. Every time I look at that banner I see his angel in the outfield. It’s hurtful, but going over there and touching that banner, giving a little prayer and having him on my shoulders, it feels nice.” 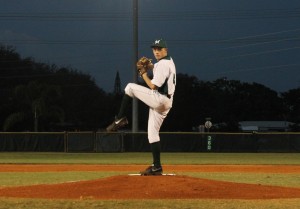 Brandon Buchanan delivered a quality start pitching into the seventh, while also striking out the side in the sixth.

Martinez competed with Carlos Santiago for the same starting spot last season, and he admits that he took his teammates’ passing very tough. But he remembers the good times, such as when the team came back for an upset victory over St. Thomas Aquinas last year. The two played together in that contest, with Santiago in left and Martinez in centerfield. Martinez says he will never forget that Carlos predicted that their teammate Oliver Vallejo would hit the winning grand slam an inning before it happened, before any of them had even reached base.

For a guy who so rarely spoke, Carlos Santiago had a tendency to predict things that would then come true. He always had that feeling and he would say that we were going to win. But more importantly, he would always have fun. He would always remember to smile.

“Carlos was a great kid, and when he passed away three days after he graduated we were all in shock,” said Clark. “He always had a smile on his face and he always came out ready to play. You could barely get two words out of him, but he was at every practice. He was one of those kids who came out here and worked hard every day. The kids really miss him.”

Baseball is a game that teaches many life lessons along the way. It is also a game that helps guys to cope with tough lessons that are learned in life. Carlos Santiago loved baseball, he loved to be a part of the Mustangs team, and his influence on those who knew him will never be forgotten.