Kenny Rasor starred on the mound and at the plate for the Bulldogs.

South Broward came into this week with an interesting dilemma. After losing last week to St. Thomas for a second time, the Bulldogs lost an opportunity to win the top seed in the district. With that in mind, Manager Joe Giummule knew that Tuesday’s game with Hollywood Hills would likely decide the three-see, with Nova and St. Thomas battling for the top seed.

With that in mind, Giummule went to ace, Kenny Rasor, in an attempt to defeat the Spartans for a second time this year. Rasor was strong on the mound, using mostly fastballs to retire a young Spartans offense, and he added two hits, including an RBI double to help South Broward to a 9-4 win.

“Kenny is doing a lot for us, he’s catching, he’s pitching, he’s hitting,” said Giummule. “At this time of the year, we are trying to be a little cautious with him. Today it was good, we kept him around the 70-pitch mark, and were able to get him out of the game after we scored those runs in the sixth. One of our goals was to get the third seed, and we accomplished that today, so overall it was a good day.”

Jordan Hill, the starter for Hollywood Hills, may have been dealing with a similar fate as Rasor had the Spartans defense rose to the occasion. Hill did a good job of allowing the Bulldogs to put the ball in play, but a few errors cost the righty runs in both the second and sixth innings.

South Broward scored a run in the second inning, and then added two more in the third. Rasor drove in one of the runs with a base hit that he turned into a double by busting it out of the batter’s box. The aggressive style was one that the Bulldogs knew they would play coming into the game.

“We wanted to put pressure on them,” said Giummule. “The more pressure we put on, we knew there was a chance that would force some mistakes.”

South Broward ran on every opportunity they were given, compiling five stolen bases in the game.

After falling behind 4-0, Hollywood Hills started to claw their way back in the fourth. Jordan Maldonado was hit by a pitch to lead off the inning. After two consecutive outs, Jed Wilson and Jared Maske hit back-to-back singles, closing the gap to 4-1.

The score stayed that way into the sixth, when the Bulldogs sent eight batters to the plate, and extended the lead to 8-1. Brian Luzon had an RBI double, while Mike Cohick and Jimmie McDonnell added hits in the inning. Sonny Tusa, Chris Cortello, Juwan Morgan, and Luzon scored the runs in the sixth for South Broward. 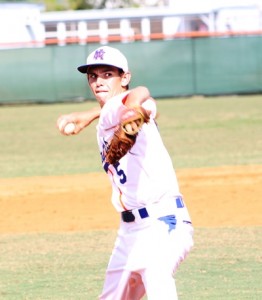 “Those runs were big for us,” said Giummule, “That gave us the opportunity to get Kenny out of the game, and preserve him a bit. Also, we were able to get Chris a couple innings of work, which was nice.”

The Spartans did not go quietly in the sixth and seventh. facing a 9-1 deficit, the Hollywood Hills offense suddenly came to life. Maldonado and Steph Richards scored in the sixth, cutting the lead to 9-3. In the seventh, Danny Pena, Richards, and Manny Lebon all had singles, with Pena scoring on a wild pitch to cut the lead to 9-4.

That was all the Spartans could muster, as Cortello induced a ground ball to first to end the game, and secure the three-seed for the Bulldogs.

Although Hollywood Hills has a young squad, they battled on this day until the last out.

“It was good to see these young guys with that type of fight,” said Spartans Manager Charlie Cardinale. “As the season goes on, we just want to keep seeing progress. We didn’t play well defensively today, but we did some good things with the bats. Every day is a learning process for these guys.”

Hollywood Hills is now headed to Gainesville for a tournament, while South Broward will host their annual Spring Break tournament next week. The Bulldogs know that they will need to be playing good ball heading into next week.

“This year is going to be a lot tougher than the past few,” said Rasor. “There are some good teams coming to our tournament, and we need to be ready for them. We need to play well, and we know we can win that tournament, so that is the goal.”