Taravella infield preparing to hold Deerfield off the score board.

Heart and fight in a player is within the player them-self and not something that can be taught. A resilient Bucks team clawed their way back to give the Trojans a scare after falling behind early on Tuesday night.

The Deerfield Beach Bucks (3-9, 0-5 District 8A-11) fell 90 feet short of upsetting the Taravella Trojans (10-2, 4-0 District 8A-11) in a 6-5 nail-biter. After a nine pitch first inning for Deerfield’s John Grassi, Taravella did not allow Grassi to make it through the second.

Cezzane Omar came in relief for the Bucks with two outs in the second and started to ignite a possible comeback. Falling behind 6-0 after just three innings could make a team give up quickly. Omar did his job as he has done all season and gave the Bucks a chance, and held the Trojans to just one run the rest of the game.

“Omar is earning a spot to become one of our starters, right now he is a middle relief guy. The way he pitched against the number one ball club in the district, he held his own. Omar is very workman like, he gets in there does what he has to do. He throws a lot of strikes and can hit his spots, he is a luxury to have,” said Deerfield Beach Manager Angelo Trenton.

Throughout the season, the Bucks have been right there in every game. With a handful of one and two-run losses, Manager Trenton believes once his team can put together seven full innings that they will be on the other side of those games. Against the Trojans Tuesday, it was the second inning that hurt the Bucks when Taravella scored five runs and sent 10 batters to the plate.

Clawing their way back from a 6-0 deficit, the Bucks scored two in the fourth, two in the fifth and loaded the bases in the seventh in an attempt to cap off the comeback. 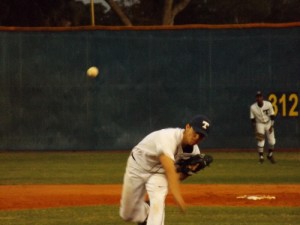 Sanders went 1-for-2 with a home run, walk and two runs scored. He also picked up the win on the mound.

In their second district meeting of the season, Trojans Manager Alan Clark gave the ball to sophomore Nik Sanders. Sanders filled the evening with a list of firsts as a varsity player. Sanders first night lasted four innings and he struck out five.

The run support came in the second inning when Sanders started things off and drew a full count walk. Ryan Kelleher singled to left on a full count, to load the bases after a second full count walk. The spark plug for Taravella Joseph Libio broke the game open with a two-run double to right-center.

“Libio is very good and having a tremendous year,” said Taravella Manager Alan Clark. “He is really like our catalyst, our fire starer for our team. If he’s going, our team is going. It was great to see him come up and get that big hit for us.”

Not stopping there, Gavin Robinson, (1-3 with a walk) singled to left and drove in two to extend the lead. After adding one more, the Trojans were on top 5-0 with two innings in the books.

Another first for Taravella’s Sanders occurred when he lifted a ball to deep right in the bottom of the third. Sanders was 1-for-2, scored twice, walked and had his first home run in the district win.

“He [Sanders] is a natural athlete, and the good thing is he is only a sophomore. He is great with his approach on the mound and going to try to beat you with his fastball. You show him you can’t hit it, and that’s what you are going to see,” said Manager Clark. “At the plate he is very smooth and has easy power from the left side. He can hit, he knows the zone, and doesn’t give away many at-bats.”

When the ball left the field, so did the offense for Taravella, as Omar kept the Trojan bats in check the rest of the night.

In the away half of the fourth the chipping away started when senior’s Aaron Johnson and Austin Soeder reached base on a walk and hit. Behind 6-0, Chris Thomas legged out an infield hit to drive in the first run for Deerfield. With runners on the corners Thomas stole second. Back to back walks delivered the second run across the plate and narrowed the lead to 6-2.

Oscar Montolio was busy at third base throughout the game for the Trojans. In the fifth after two beautiful plays at third, Soeder who was 2-for-3 with a walk and two runs, lined a ball that Montolio was unable to come up with. Igniting a partial rally, the Bucks attempted to saw their way to a smaller margin.

Freshman Rafael Santos hit a ball up the middle with the bases loaded that drove in two Bucks and cut the lead in half. Santos delivered the timely hit that Deerfield was looking for all game. According to Manager Trenton its one of those timely hits that have been needed all year, when runners are in scoring position. 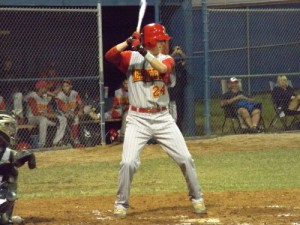 Soeder went 2-for-3 with a walk and two runs for Deerfield.

In a game that was once a six run lead, now only two, Taravella needed to find a way to stop the bleeding. Deerfield continued to poke in the sixth despite not scoring.

In a drama filled top of the seventh Deerfield looked to even the score.

Soeder reached on a walk, then Xavier Diaz popped a ball to shallow right. The right-fielder charging hard and the second baseman back peddling out, the ball dropped between the two but Taravella was still able to get the force at second on a heads-up play.

After a single and a walk, the bases were again loaded for the Bucks who were looking for another timely hit.

George Edmunds recorded a RBI after being hit in the foot with the bases loaded. A pop up to right was the third and final out as Taravella remained perfect in their district.

“We can not take any game for granted, were not looking for the title in one day. We are looking at the one game only and that is the one we have to prepare for,” said Manager Clark. “Everybody knows Deerifeld, and they have positive young guys over there. It’s not just a team you can come out and say hey, okay, we’re going to play five innings and go home. No they are going to fight. I just have to make sure these guys play a seven inning game against everybody, we cannot just get comfortable with a six run lead or four run lead, we need to keep that foot on the gas pedal.”