Overview – Heading into this season the teams in this group were convinced it was going to be a very tight and competitive battle between them. Things certainly held up to those predictions, as the top seed came down to a coin flip after Monarch and Fort Lauderdale split the regular-season series. By coming on the right side of that coin toss, the Flying L’s have landed in a great position to contend for their district title in school history. Meanwhile, the other side of the bracket renews a great rivalry that has sprung up over the past few years between Monarch and Northeast. 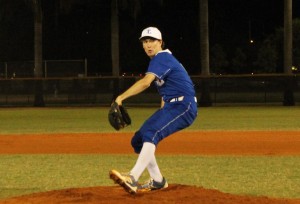 1. Fort Lauderdale – The Flying L’s could not ask for a better opportunity to chase after a district title this postseason. Fort Lauderdale just needs to get past a very beatable Ely squad to stamp their spot in the championship game, a win that would also put the team back into the regional playoffs for the first time since 2011.

Longtime Manager Terry Portice is thrilled that Lauderdale is playing in a district with all public schools for the first time in many years. The club is honored to host the district tournament on a home field that has gotten a lot of improvements done to it as part of a massive campus overhaul. The team has waited some time for the chance to reward its home fans by playing in the district playoffs on their own turf, and if things go their way they would also earn the right to host the opening round of the regional playoffs as well.

The Flying L’s have relied heavily on senior starter Matt Freeman to shoulder the load on the mound, as the right-hander toed the rubber for all their biggest games this year. Freeman has responded to lead the club in virtually every pitching category, while also showing his character by being a leader and teaching the younger guys how to play Flying L’s baseball with class and respect.

“That’s what we try to do here is to play with young men who have character who play the game with character, and who have great respect for the game,” said Portice. “That includes respecting the teams you play. Win, lose or draw, when you come off the field you come with your head up knowing you’ve done the right thing the right way. As I’ve said for a long time, I’d much rather be respected than liked.”

The team has also gotten quality innings from Chase Navarro and David Silva to provide them with just enough depth to get them through the playoff stretch. Navarro led the club with a 0.95 ERA.

With a young overall roster, the Flying L’s have been a bit slower to come along at the plate. Since the team lacks a ton of power, it has focused on playing fundamental baseball to move runners over and manufacture runs. Through this process the batting order has learned how to execute according to what each situation calls for, and the players have come together as a group by learning what each guy does best within that game plan. Lucas Berken, Reese Blankenship and Corey Stern all posted double-digit numbers in both RBIs and runs scored, while Freeman also led the offense in most areas. 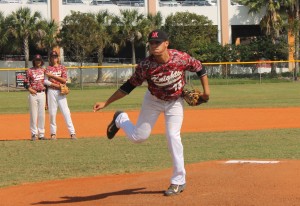 2. Monarch – It would almost be unfair if the Knights did not have to go through the Hurricanes in order to make it back to the district championship. Since the two squads landed in the same district beginning three year ago, they have waged some epic contests and have had to go through one another in order to win the district crown. The Knights won the title two years ago, and the Hurricanes did it last year to come in as the defending champs. The games have been tight and competitive, and it has provided their fans with some great memories from some very exciting games.

The next chapter in that rivalry begins in the semifinals, where the winner will advance to play on and the other will see their ride come to an end.

“Everybody has a role on the team and if everybody contributes and does their role, if everybody pulls in the same direction, we will realize our goal of winning a championship,” said Monarch Manager Joe Franco. “You really have to play well at the right time to win this district. There is no guarantee, but if the kids can buy into that team mentality they’ll have a chance to win back the district title we lost last year.”

Pitching and defense has been the key to Monarch’s success. The team has relied on three very experienced and capable starters in Nick Alonso, Brennan Bosworth and Andrew Rohloff. These three hurlers combined to log the majority of the innings on the mound and recorded nearly all of their victories. Alonso led the district with 65 strikeouts and five wins, while Bosworth posted a 0.90 ERA, and Rohloff was close behind with a 1.23 ERA.

Monarch showcased a lot of depth and ability in its lineup as well. The club hit nearly .300 as a unit, while Alonso, Jonathan Benestad, CJ Delabosque, Joey Rugare and Joey Hennessey all hit over .300 individually. It was the sophomore Rugare who led the way in batting and RBIs, emerging as a dangerous bat in his second varsity season.

The Knights swept the Hurricanes during the regular season to earn some payback from last year, and should they make it a hat trick they will find themselves back into both the district championship and regional playoffs for the third straight season. 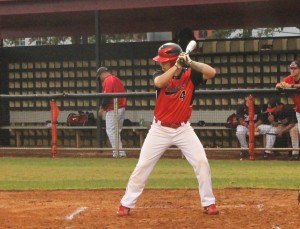 3. Northeast – The Hurricanes have just the right answer for the teams that are coming after their title as the district champs, and that answer is senior ace Ralph Morel. Northeast has counted on their captain and ace to be the rock of the squad, giving them a chance to win every time he is on the mound while also filling the other young players with a lot of confidence behind him.

Morel has been true to form this year, leading the team in most pitching categories and giving Northeast exactly the type of mound presence that they have hoped for. He has performed very well against both Fort Lauderdale and Monarch, and has proven he can win big games in pressure moments after earning the win in the championship game a season ago.

Yet while Morel is the key piece of the puzzle, the veteran knows that it takes a team to win championships. He has relished his role as a leader this year, and admits it has been a treat to watch the young guys grow up right before his eyes.

Northeast has developed some quality pitching behind their ace. Right-hander Isaiah Blackwell has been a solid number two option, while

The Hurricanes saw their roster shaken up early in the year when they lost a few key members due to off-field issues, and it took them a while to bring a very young lineup along from there. But as the season progressed, the talent, heart and character of some of their newest members has seen those guys grow quickly into integral pieces of the puzzle. Freshman shortstop Robert Robinson has taken on a leadership role, showcasing a strong baseball IQ and the ability to communicate and motivate his teammates both by action and words.

In facing Monarch yet again in the district playoffs, the Hurricanes take great comfort in knowing that it is a team they have beaten before and can beat again. Yet by that same token the team knows the Knights likely feel exactly the same way. The two clubs have historically played very tight and close games, and every sign points to that happening yet again this postseason.

“We’re in a different position this year being the ones with the bulls-eye target on us,” said Hurricanes Manager Kevin Carney. “Last year we were the team trying to catch another team. So it’s a challenge for the coaching staff and everybody to move past last year and realize that this is a new year and a new team.”

4. Ely – The Tigers are a big longshot to pull off an upset over the top-ranked Flying L’s. Although the school is loaded with athletes, it has not fielded a competitive program in recent years. Ely struggled mightily in the district this season, and has not had any success against top-flight pitching. While the program could ignite a frenzy by scoring their biggest win in team history by beating Fort Lauderdale, it is highly unlikely that will happen.