Cowboys Stamp First Regional Ticket In Over A Decade 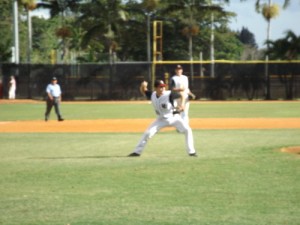 Joey Cutrone fields a ground ball in the fourth.

At the end of district play two weeks ago, Piper found themselves on the outside looking in. Sitting with the number one seed, Cooper City was ready for whomever was thrown at them. Last Friday, Piper’s Manager Donovan Collins received a phone call stating that his team was in the tournament and was to play Tuesday afternoon.

Cooper City wasn’t District 8A-12’s top team by fluke, but with solid defense, great pitching and timely hitting helped earn them the regular season crown. With a contribution from all three areas, the Cowboys squashed the Bengals hope at moving forward and locked up a regional spot for the first time in a decade with a 10-3 victory.

Cowboy’s Manager Wayne Stofsky commented after the game about how the city is a help to boosting the team. Although a home game, hosted at Western High for the tournament, the fans traveled with their team in a sea of red for their semifinal game.

“The school and the city are behind us, the kids are happy, there is a lot of excitement in Cooper City right now,” said Stofsky.

Joey Cutrone, who threw five innings for the win, had a see-saw first inning before he settled into cruise control. Cutrone pushed off with force against the first two Bengals, retiring them both by way of a strikeout. Senior Chase Perry sparked a two-out rally with a walk.

“Before the game I told our pitchers, all we have to do is throw strikes,” said Stofsky. “If we were able to throw strikes and do what we’ve been doing all season, we would win the baseball game. The only way we were going to get in trouble is if we were wild, walking batters, and hitting batters.” 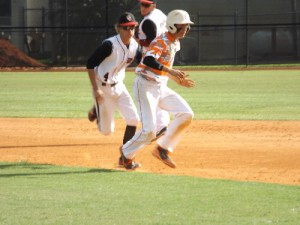 Steve DiPuglia records an out for Cooper City.

Clean-up hitter Gregory Snyder pounded a high chopper into the dirt to third for an infield single. After falling behind early, Cutrone issued his second two-out walk and loaded the bases. Piper’s Ryan Taylor tallied the first two RBIs of the game when he drove a ball down the right field line for a two-run double and an early lead. That would be all the Bengals could scratch out of Cutrone in their first at-bat.

Cooper City wasted no time gaining control of the lead, as they answered back with five of their own in the home half of the first. Providing patience at the plate helped manufacture five runs on two hits, highlighted by a two-run single from Quest Hopler to give the Cowboys a 5-2 lead.

Cutrone and the Cowboys never looked back, as he retired 12 of the next 14 batters.

“I wasn’t throwing too many fastballs for strikes, and I noticed my slider was working good. So I kept throwing more sliders and it worked for me,” said Cutrone. “We are playing good right now, as a family and not as individuals. We need our pitching, defense and hitting if we want to keep winning.”

The Cowboys scattered five more runs on a couple of hits in the third with opportunities that were given. Catcher Brett Marks added a two-run single and later scored to give them a commanding lead. The game would end that way as both relief pitchers cruised through the final innings and the Cowboys mark their spot in the championship.

Piper slipped their way into the tournament, but wasn’t able to overcome a powerful Cooper City team. In a game that much described Pipers season, a few unfortunate bounces led to a six-run deficit.

“Today’s game was a microcosm of our whole season,” said Bengals Manager Donovan Collins. “We come out, score some runs, and give them right back. We have our one inning where we collapse and we’ve done that this whole season.”