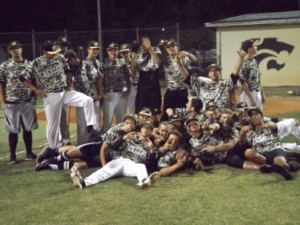 The Western Wildcats demonstrating how to stay loose and relaxed on the field.

Baseball is supposed to be about having fun and competing at the same time. Sometimes baseball players get wrapped up in the mentality of winning and impressing and forget to have fun, smile, relax and just play the game they love. When ball players are having fun while playing it becomes easier.

The Western Wildcats proved just that on Tuesday night. A relaxed group of ball players had some fun playing the greatest game and were all smiles in a 10-3 district win over the Piper Bengals. The win keeps the Wildcats (7-10) in contention for the number one seed in a tight race in 8A-12 with a 4-2 district record.

“Whenever we stay relaxed we seem to just play better,” said Wildcats David Flores. “We seem to get tense against some teams and it doesn’t help us at all. When we’re relaxed, it’s fun and everyone’s laid back and easier to hit the ball.”

It was the second-year varsity sophomore Flores who set the tone for the Wildcats with a memorable night at the plate. In the fourth, Anthony Gutierrez singled and Flores came to bat with two outs and a runner on. He turned on a fastball and watched the ball disappear into the sunset. In what seemed to last forever the ball finally came back into visibility as it cleared the fence. The home run was his first of the year and first of the night.

“It was just relaxation. I knew we needed a run and it was a close game, but I just tried to stay relaxed,” said Flores. “We were just having fun and it was a lot easier to swing at a good pitch.”

Alex Artaza threw four strong innings for the Wildcats, holding the Bengals to just one run on one hit. Artaza allowed the run in the fourth when Eric Rath laid down a suicide-squeeze and Chase Perry scored for the Bengals (7-10, 1-5). But on this night, it was all about the offense. 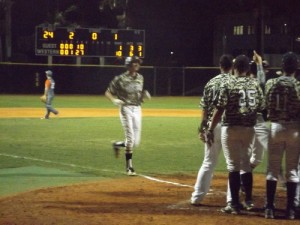 David Flores gets ambushed at home after his grand slam during the Wildcats’ seven-run fifth.

A three-run lead and one out in the fifth, the Wildcats opened the game up. After a swinging strike three that got away from the catcher, Brannigan Hart beat the throw to first and advanced to second when the first baseman was unable to scoop the throw out of the dirt.

In an attempt to put a force out at any base or set up a double-play ball, the Bengals chose to intentionally walk Joseph Spano. Senior Anthony Difabio walked to the batters box with high hopes to deliver in a key situation. The ball exploded off Difabio’s bat to right field for a two-run double that opened the flood gates for Western.

Difabio has been the anchor for the Wildcats all year. In time of need the team leans on him for leadership and poise and he delivers. While most shy away from the spotlight Difabio seems to embrace it and make the most of his opportunities.

“I’ve probably said this many times, Anthony Difabio has come through for us all year,” said Wildcats Manager Paul Barnes. “Difabio has just been huge for us, its what we’ve come to expect from him. It’s been him and Hart offensively being monsters for us the whole year. Having Spano in the lineup tonight is just pure energy. He got the first RBI for us with the big hit in the third and the intentional walk to set up Difabio’s double that really got us going.”

The Bengals placed Jaime Del Hoyo on first with another intentional walk hoping to make good in their second attempt at a double play. With the bases loaded Flores lifted another fastball to the now black skies of left field. As everyone was able to follow the ball all the way out this time, cheers erupted immediately with Flores’ grand slam on his second home run of the night. His four RBIs capped a seven-run inning for the Wildcats as they took a commanding 10-1 lead.

“Flores has kind of been doing what most of our guys this year are doing, under-performing offensively,” said Barnes. “The last week or so he’s been coming out and he has shown flashes throughout the year of coming out of it. A few great at-bats Friday against Heritage and that carried into today in his second and third at-bats.”

Flores finished the game 2-for-3 with two home runs and six RBIs, and a memorable night he won’t forget. 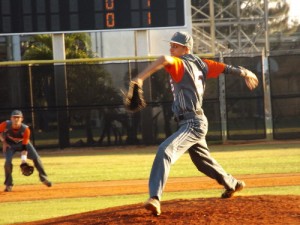 Piper’s Jacob Makoulian battled in the early part of the game, before a few miscues led to an earlier exit then he wanted.

In relief Richard Medina threw two scoreless innings, and Drew Cleveland threw the seventh, allowing two runs on one hit. The Bengals Perry Woodard doubled in the seventh and put runners on second and third with one out. Cleveland then settled down and closed out the victory for Western.

Bengal’s Manager Donovan Collins was frustrated with the way his team performed offensively and defensively Tuesday night. Knowing they are running out of district games, every win is crucial in their fight for a post-season spot. A mixture of everything was the cause for the Bengals loss, but giving the Wildcats extra outs and free bases came back to haunt the Bengals.

“It was a very tough loss,” Collins admitted. “We made our own mistakes and it hurt us tonight. We had Jacob out on the mound and I thought he was throwing a good game and our defense let him down. In what was a close game, then became a blow-out. They picked up those seven runs in that one inning and that opened the ball game up for them. We made mistakes, errors, and it just piled up. We couldn’t overcome it tonight.”

Next week the Bengals face off against Cypress Bay and Cooper City needing to win at least one of the two, and get help from other district foes in order to make the district playoffs.

With a post-season spot locked up Western will look to avenge one of their two district losses against district leader Cooper City Friday night. Next week they play host to South Plantation and look for revenge against the purple and yellow who handed the Wildcats their other loss. Fighting for the top seed, and hosting the district tournament, players and coaches believe there will be more special nights like Tuesday to come this season.