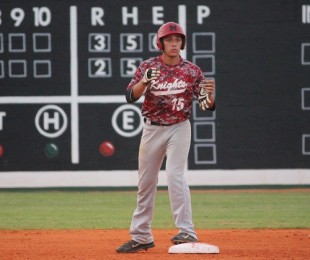 Photo Gallery
Monarch gave a good effort Wednesday night, but the Knights were facing an Atlantic team that is playing its best ball of the season.

Last week they stunned West Boca and Dwyer, two Palm Beach County powerhouses, en route to the 7A-13 title. On Wednesday, they continued their postseason run, defeating the Monarch Knights 4-1 at Miller Park in Delray Beach in a 7A regional quarterfinal match-up.

Considering their recent string of victories, it is hard to believe that just a few short months ago, they started the season with a miserable 0-6-1 record.

“We worked through a lot of adversity early on,” admitted Eagles’ manager Steve Wilson. “A lot of people would have rolled over. We don’t do that. This team doesn’t do that.”

He believes that team unity is primarily responsible for the turn around.

“We kind of got into it as a team,” said Wilson. “We became more of a team. And when that happens, when you make mistakes as a team, your teammates pick you up rather than pull you down and I can see that among the players.”

The Eagles, however, did not make many mistakes on Wednesday, playing solid, fundamental ball throughout the game, while not committing an error.

After falling behind by a run in the first inning, Atlantic plated three in the second and never again trailed.

As he did last week against West Boca, Wilson once again gave lefty Stefan Leclerc the start. And as he did then, the junior answered the call and turned in a strong performance.

That did not look to be the case to start the game however. Leclerc walked the first Monarch batter, Joey Hennessey, on four pitches. Hennessey moved to third on a Nick Alonzo double and then scored on a ground out by C.J. Delbosque to open the scoring and put Atlantic in an early hole.

“I knew getting the first guy out was the most important,” said Leclerc, who was admittedly upset with his showing in the first. “It just got to my head. But then, later in the game, I was able to focus down and have a purpose when I pitched.”

Apparently, that purpose was to strike batters out. In the second inning, he struck out the side in order, all swinging, and went on to record nine punch outs in the game.

By mixing speeds and working both sides of the plate, he was able to keep the Monarch batters off balance all night, allowing them only four hits while pitching the complete game. 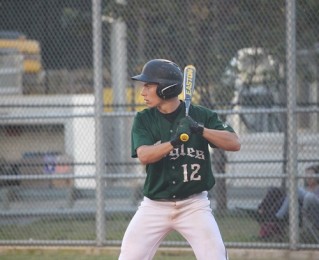 Alex Cordes hit a two-run double to put the Eagles in the lead in the second inning.

“I feel like our coaches prepared us perfectly for them,” Leclerc said about his success on the mound. “We knew what their approach was and that they didn’t like hitting with two strikes. I was glad I could execute the rest of the game. The first inning was a little rough, but the rest of the game went pretty well.”

Alonzo, who made the start for the Knights, had the exact opposite problem as Leclerc. He struck out three of the first six batters he faced then abruptly lost his command in the second. With one out, Nicholas Cortese battled through an eight pitch at-bat versus Alonzo before being hit by the ninth pitch. Alonzo then walked the next two batters on nine pitches to load the base for lead-off man Alex Cordes. Cordes ripped a 2-1 pitch down the left field line for a two-run double that gave the Eagles a 2-1 advantage.

“Outside pitch, I took it down the left field line,” recalled Cordes. “Just tried to do what I could for the squad tonight.”

Wilson gives credit to the center-fielder for some of the teams recent success.

“His average has been going up, and up, and up, towards the end of the year,” said the manager. “He really is the catalyst for us in our line-up. We know when he is up we have a very good chance of getting him on base and then we go from there.”

After Cordes’ heroics, Ohanessian was hit by a pitch to re-loaded the bases for the number three hitter, Jarren Pinkney. Pinkey grounded to third for what looked like an inning ending double play. Third baseman Joey Gerber fielded it cleanly and threw home for the force but the subsequent throw to first was off target, allowing Cordes to come home for the third run.

It was all Atlantic and Leclerc would need, but Ohanessian and Pinkney teamed up to add one more for good measure in the fourth. After Ohanessian singled and advanced to second on a passed ball, Pinkey lined a shot down the third base line for a stand up double, his first hit and only RBI of the night.

Aside from pitching the first four innings for the Knights, Alonzo also starred at the plate, tallying two hits in three at-bats.

No coach, player or manager ever wants their season to end until they’re the last team standing and the Monarch Knights and their manager Joe Franco are no exception.

“Obviously, every time your season ends, you’re disappointed,” said Franco. “I’m disappointed, I’m not going to lie. I had high hopes for this team but we had a good year.” 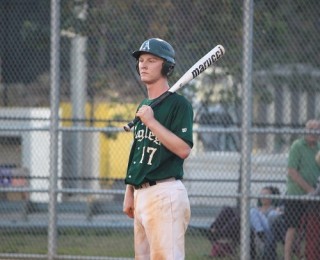 Joey Ohanessian went 2-for-3 with a double and run scored.

He appreciated that his players were able to garner some valuable experience and believes that they represented their school well.

“Our kids got some more experience in the regional tournament and I’m proud of the way they competed tonight,” he said. “They fought until the last out and as coaches you can’t ask for much more than that.”

The disappointment felt by the Knights is exactly what keeps the Eagles motivated as they prepare for a rematch against district rival Dwyer, whom they beat in the district final.