There was plenty to celebrate for Broward’s all stars on Saturday.

It was a fitting swan song.

The 2014 Broward graduating class is the first of its kind during the history of High School Baseball Network. Playing their final high school baseball of their careers, accomplished seniors from across Broward County converged for the fourth annual HSBN Broward High School Baseball Senior All Star Game Saturday at Westminster Academy Sports Complex in Lauderdale Lakes. This pinnacle event has been a staple to close out each baseball season over the past four years, and this group of seniors was the first to enjoy HSBN coverage for their entire high school careers.

In return, the seniors rewarded HSBN and several hundred fans in attendance with one last memorable baseball game. Using a new format this year, it was the blue team representing the Public Schools who won 11-5 over the team in red that represented the Private Schools.

Offense has always been a big staple of this event, and that legacy continued to rein true as the Blue Team racked up 11 total hits and several big innings. Coral Springs’ Davis Alessio had a three-run home run that scored Flanagan’s Oscar Rodriguez and Ryan Dodge in the top of the sixth, and Dodge added a two-run shot of his own in the ninth, also scoring Rodriguez on the hit. It was a fitting final at bat for Dodge, as he was also the player who won the HSBN home run derby as a sophomore in 2012.

McArthur’s Jorge Alvarez also had a big shot in the contest, crushing the ball deep to left-center field and racing around the bases for an RBI double that drove in Monarch’s Nick Alonzo. Alvarez was just caught as he tried to stretch his hit into a triple, but still managed to put the Blue Team back on top for good. 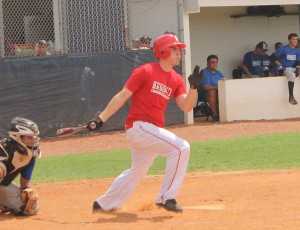 Offense continued to set the tone in the history of this event.

The Blue squad had taken an early 3-0 lead in the top of the first. Nova’s Kyle Pangallo led off with a single that got lost in the sun on the defense, and Rodriguez lined a single into center field for his first hit on a 2-for-2 day that saw him reach base three times. Dodge was hit by a pitch to load the bags, and Nova’s Brandon McCalla opened the scoring with an RBI single smacked through the left side. Cooper City’s Phil Tomasulo had a fielder’s choice RBI to follow and Douglas’ Max Boling scored McCalla on an infield ground out.

The Red Team battled back to even things up. Sagemont’s Brynn Martinez drew a leadoff walk in the bottom of the first and eventually scored on a wild pitch, and Archbishop McCarthy’s Ryan Sinzenich was hit by a pitch and then came home on a balk to pull within 3-2. Pembroke Pines Charter’s Jake Jacobs bounced a single to third base in the third, then worked his way around the bases and scored on a throwing error to even things back up.

Pitching locked in from there for the Blue Team. Cypress Bay’s Ben Fitts, Taravella’s Chris Verardi and Monarch’s Brennan Bosworth all tossed 1-2-3 frames, and Nova’s Nick Martinez shook off a leadoff error that allowed Archbishop McCarthy’s Micheal Gigliotti to reach by retiring the next three hitters.

After Alessio’s homer gave the Blue Team the margin of victory, Taravella’s Joseph Libio added some insurance with a big two-RBI single with the bases loaded in the seventh. Hollywood Hills’ Danny Pena singled to lead off the frame, Coral Glades’ John Mendez blooped a single to right to follow, and Nova’s Cole Habig walked to fill the bases and bring Libio to the dish.

The Red Team mounted one final comeback bid in the eighth. Sinzenich was hit by a pitch for the second time, and then gave way to Westminster Academy’s Jeremy Viveros as a pinch runner. Coral Springs Charter’s Brandon Laboy and Westminster’s Weston Clemente both walked to load the bases, and St. Thomas Aquinas’ Teddy Meissner pushed Viveros home when he also drew a walk. Laboy closed out their scoring by coming in on a wild pitch. 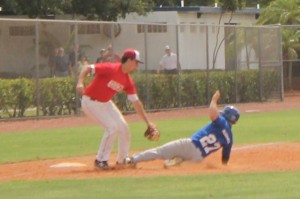 McArthur’s Jorge Alvarez tries to stretch to third on his big hit in the fifth inning.

The Red Team also got some memorable pitching performances. Cardinal Gibbons’ Mark Nowatnick struck out the side in the second, needing just 14 pitches to mow through his three batters. Clemente, St. Thomas’ Kevin Balfour and Highland Christian’s Raygelo Melfor all tossed scoreless frames as well.

Flanagan’s Chris Rodriguez also tossed a perfect ninth for the Blue Team, recording a pair of strikeouts to close out the contest and bring his teammates out to dogpile on the mound in victory celebration.

It was a beautiful day of baseball, filled with many big final moments to leave fans with one last time. As these All Stars prepare to move on to the next chapters of their lives, the day provided one last glimpse into the magic that has helped move them along on their respective paths. High School Baseball Network had the privilege to see them through their entire high school careers, and hopefully every graduating class to follow will be able to say the same thing.

*HSBN sends a big thank you to all those who generously donated used baseball equipment to area Chicago White Sox Scout Pepe Ortega. The equipment will be shipped to the Dominican Republic to help underprivileged ballplayers.

*Leftover meals from the All County Dinners were donated to All Saints Soup Kitchen in Oakland Park. Follow the link to see how you can provide assistance to their cause.