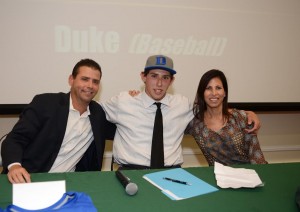 Pine Crest’s Zach Kone signed with Duke, one of many locals to sign during the National Early Signing Period.

There is no greater moment in the college recruitment process than the instant when you sign the dotted line and cement your commitment. Getting recruiting is an exciting and fulfilling moment in a ballplayer’s career, but it can also be a stressful one. So when it all comes to fruition and all doubt is erased, it leaves only the positives to reflect and enjoy.

This past November many of Broward County’s top baseball talent enjoyed this reality, taking advantage of the Early Signing Period to ink their commitment and bask in the glow of completing the recruiting process. Heading this pack was Broward’s reigning Player of the Year, Pine Crest senior Griffin Conine, who has signed to play for the Duke Blue Devils in college. Also inking his future to Duke was fellow Panthers teammate Zack Kone, who shared the thoughts that encapsulate the moment for everyone.

“Signing with Duke is a dream come true, and I couldn’t be more excited about the opportunity to play baseball and study at such a great institution,” Kone said.

It is a coach’s thrill to see one of their guys go on to play for an elite college program, but it is an even greater thrill when that college is also so highly renowned for its academics. Also headed to play baseball in the Ivy League is St. Thomas Aquinas’ Alex Dickinson, who is headed to Princeton.

West Broward saw a total of four players sign this November, with Christian Dearman headed to Anderson University, Chase Hay-Eldon to Nova Southeastern, Justin Martinez to Belmont Abbey College and Michael Schappell to Jacksonville University. Bobcats Manager Sergio Ambros had praise and excitement for all of his guys, noting that Schappell has the potential to be a MLB draft pick, that Hay-Eldon is one of the hardest workers he has ever seen, and that Dearman worked his way into a college pitcher over his years with the team. But Ambros admitted it was an especially big moment for him when Martinez signed his letter of intent.

“Justin is an example of a young man not giving up on his dream,” Ambros said. “He was cut as a freshman, but continued to work towards his goal of making our Bobcats team and then pitching at the next level. The day he committed to Belmont Abbey was one of my proudest as a coach. He has the best attitude of any young man I’ve coached in recent years.”

Douglas also had numerous signees, with Dominic Dicaprio signing with Rice, Devin Conn to Middle Tennessee State and Ricky Miranda with Santa Fe College. Eagles Manager Todd Fitz-Gerald has seen many of his guys go on to the college and professional ranks, and he takes pride in seeing them all accomplish their goals by working so hard to achieve them.

“You are a product of your work ethic,” Fitz-Gerald said. “The time you put in to chasing a dream is vital to the athlete you become.”

While individual hard work is essential to the process, every player knows that it is also something that cannot be accomplished alone. As guys were signing their letters and enjoying their big moments, they did not forget to thank all the people who had helped them along the way to make it all possible.

“I want to thank all of my coaches who have helped me along through this journey,” said Pembroke Pines Charter’s Daniel Rodriguez-Velez, who signed with Bethune-Cookman University. “Especially my family; I can’t be any more grateful. This is a very humbling accolade for me.”

“I want to thank my coaches for helping me reach my goals, and my parents for pushing me and supporting me on this very long road,” Gomez said. “But I’m very thankful for my teammates and especially my coaching staff that has helped me strive to make my dreams a reality.”