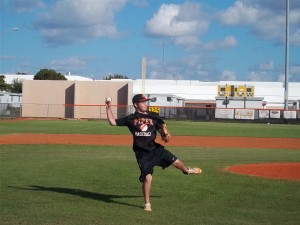 Shortstop and pitcher Eric Rath shows off some of his solid fielding skills during Spring practice.

There is a new mission starting at Piper High, and new Manager Pat Pisani is leading that mission. Pisani, a formal Bengals ballplayer and returning alum, is setting the bar high for his squad. Pisani was a volunteer coach for the program last year, and because of his enthusiasm and dedication to the team he was asked to take the helm this season.

“Coming back to coach where I was a student athlete is exciting for me,” said Pisani, a 1991 graduate of Piper. “The thing that I am most focused on is mental toughness and learning how to win. We have enough talent to compete in our district. Our goal is the district championship. My expectations are high.”

Pisani inherits a team that last year was young and lacking in experience, but showed some promise to close with a 9-13 record. He feels plenty of optimism because of the strength of the Bengals pitching and fielding. The nucleus of the Bengals’ team this year is a core of juniors who performed well last season.

“I am looking for guys like Ryan Taylor, Eric Rath and Greg Snyder to step up this year, because they had a lot of playing time last year,” Pisani said.

The team is in good hands behind these leaders. Taylor hit .321 last year, while Eric Rath was a model of consistency in the infield with a .923 fielding percentage and the starting pitcher in seven games. Rath will split time between shortstop and pitcher. Snyder will also be looked upon for leadership. The Bengals’ starting catcher will be handling the pitching staff. Snyder has exhibited a strong throwing arm and good mechanics behind home plate, and he threw out eight base runners last year.

“We will treat every game as an important one,” said Christopher Nunez. “Coach will have us prepared and focused. We look forward to competing in the district games and, of course, playing our rival South Plantation.”

Nunez will anchor the outfield in center field. He brings a solid .317 average in 2014 along with aggressive base running (10 steals) from his sophomore season. Pisani expects another solid season from junior Michael Cuminale, who led the team in base hits last year.

A newcomer this year with great promise is Joe Sallustio. Sallustio plays a solid third base and will also be part of the strong pitching contingent. Another new face on the team is second baseman Brian Clancy, a senior who shows deft footwork turning double plays. Clancy completes an infield that brings out the enthusiasm of an optimistic Pisani.

“I told the team that every practice we have is truly hard and truly tough,” Pisani said. He believes this regiment will carry forth in the games and will create success. 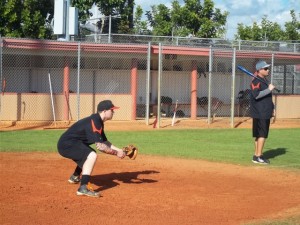 The Bengals start their spring season with a preseason tournament in Deerfield Beach. Also included in their schedule is something new for the Piper squad, as it will be travelling to the west coast of Florida to play in a tournament in Naples on February 13th. Pisani is excited about this, as it expands the exposure of the team. He also believes the road trip will provide a great opportunity for the young group to bond while travelling away from home.

The challenge this year is to build the foundation of winning. Pisani has started that foundation based upon working hard, setting high expectations and establishing the mindset of mental toughness.

With the slate clean for 2015, it promises to be a year that holds a turning point for Piper baseball. The objective is to start strong and finish strong using good judgement and sound decision-making. This formula should be the makings of success and improvement as Pisani sets out on his mission to make the Piper Bengals a team to be reckoned with.