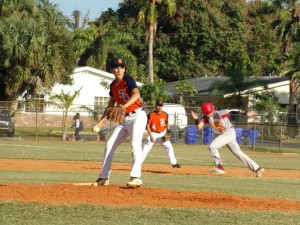 The Deerfield Beach Bucks ventured to downtown Fort Lauderdale to meet the Stranahan Mighty Dragons on Thursday afternoon. The Bucks came prepared. Armed with a terrific tandem of Donny Vlahakis on the mound and Trent Youstin in the batters box, the Bucks bested the Mighty Dragons, 14-0.

The Bucks started the run scoring early. Left-fielder Chris Thomas set things off with an opposite-field double to right. Thomas ended up on third after an errant throw and later scored on a wild pitch. After an out, Deerfield Beach struck again, putting together a hit batsman and two timely hits to plate two more runs for an early 3-0 edge. The bottom of the inning was where the starter Donny Vlahakis took over. Using a hard fast ball and pinpoint control, Valakis struck out the side on two called third strikes and one swinging.

Stranahan’s starting pitcher, Logan Castellon, settled down a bit in the top of the second inning and kept Deerfield Beach scoreless with the help of some fine fielding and a pick-off. This put the ball back in the hands of Vlahakis and he baffled the Mighty Dragons again. After giving up a base hit down the right field line, Vlahakis proceeded to strike out the side for the second straight inning.

“This was Donny’s first start of the year. He just transferred in. He gave us three solid innings.” Assistant Coach Robbie Alonso said. “He got ahead of the hitters, stayed ahead of the hitters, and that is what we were looking for. We were not complacent today. We came out hard today and we kept at it.”

The top of the third brought Deerfield Beach back to the plate and they came hungry. Trent Youstin led off with a towering shot over the left center field fence for a solo home run. That opened the flood gates, as the bucks sent 13 batters to the plate in the inning, with eight coming around to score. Left-fielder Conner Kelly had a solid base hit to left-centerfield for an RBI. On his second at-bat of the inning, Youstin, stung one down the left field line to score two more runs.

“Trent had a great defensive game, and boy what a day at the plate.” Coach Alonso stated, “He had three hits after being hit by a pitch in the first inning and drove in five runs, nice day.”

Deerfield Beach went on to score three more runs in the fourth inning to put the game well out of reach. Vlahakis was the star on the mound with three solid innings pitched. In those three innings he struck out eight Mighty Dragon players. 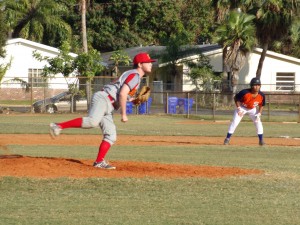 The Bucks received two strong relief innings from Kyle Miller out of the bullpen. Miller gave up only one hit and had four strikeouts. Youstin was super at the plate with three hits, three runs scored and five RBIs. Connor Kelly added three hits and two RBIs for the Bucks.

On the Mighty Dragons side, Manager Frank Vargas saw some positive things that he will build on.

“We have been together for a short time and we are young,” Vargas said. “But when Jay Urbanik came in to pitch, I was encouraged. He threw strikes and we need that. We also had some good plays in the field by some of the younger guys and we will build on that.”

Deerfield Beach came away with the victory and was able to play all of the players on their roster. Alonso noted that this will be important to give them some experience before they hit the tough district campaign.