Everglades Battles To 2-1 Victory Over Nova 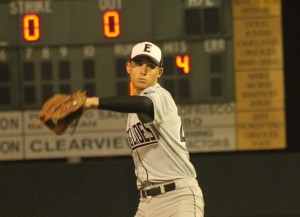 Everglades ace Raul Queseda shined on both sides of the field Wednesday to help the Gators to the exciting 2-1 victory.

When Raul Quesada is on the mound, he is capable of beating anybody he faces.

Playing in a tough road environment Wednesday, the Everglades ace proved that both he and the rest of the Gators are a team to be reckoned with. Quesada shined both on the hill and at the plate to help lead his team to a big 2-1 victory over previously undefeated Nova, in an exciting contest played at Pat McQuaid Field at Doug Amos Stadium on the Nova campus.

After an impressive start, Quesada followed it up by accounting for the deciding run in the top of the sixth. Sending a flare to shallow center field that the defense was unable to reach he led off with a base hit, then moved into scoring position on a sacrifice bunt from Eduardo Rodriguez. Cecilio Santos followed with another flare to shallow center, and Quesada came home following a throwing error to break a 1-1 tie and put the Gators (2-3) back on top for good.

“I just needed to get that hit,” Quesada said. “I came out from pitching so I had to focus on hitting, and I had to get that run and we had to get that lead. I just said let me put the bat on the ball, and I did it. All I had to do was get on base and we have got to score that run. That’s it.”

Runs were tough to come by on a night dictated by pitching and defense. After Everglades went ahead late, the Titans (5-1) got one more chance in the sixth after Edwin Pichardo drew a leadoff walk and stole second to get into scoring position. Gators reliever Erik Curiel locked in to retire the next three batters and strand the tying run on the bases. Closer Dominic Desisto then tossed a perfect 1-2-3 seventh to seal the victory and earn the save. 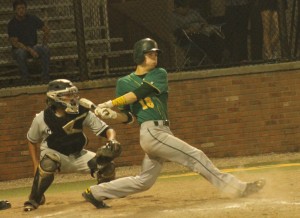 Nova catcher Austin Davis singled in the fifth to break up the no-hitter.

“When I put them together this is exactly what I dreamt of, is to come out and play teams like this and do exactly this, and then have Dom come in and close it,” Gators Manager Matt Cordova said. “They couldn’t have done it any better, the entire team, all the way.”

Everglades suffered one of its worst losses of the season on this same field a year ago, and it was able to show just how far the club has come since then. The Gators collected seven hits, got some key plays on defense and received pitching that was as good as any.

“The best part of it was that it was just an absolute complete team win,” Cordova said. “They never gave up and fought the entire way. They just didn’t seem like they were going to be beat tonight, and they knew what they had to come and do. This is the brand of baseball we have been waiting for all year. We got it tonight and now we just have to keep the momentum going.”

Suffering its first loss of the season, Nova can leave the field knowing the team battled even though it did not have its best performance Wednesday. The batters struggled to get on base, and the defense made some untypical errors. Despite those missteps, the Titans were still in the game right down to their final swings.

“We just weren’t into it today for some reason,” said Titans Manager Pat McQuaid. “We competed but we didn’t really compete. We had a chance in the sixth inning to break the game open and we didn’t do it. That’s part of the growing up process. But we’ll be there.” 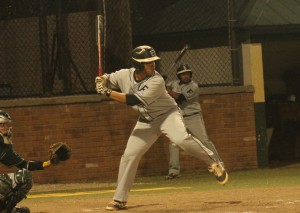 Eduardo Rodriguez collected one of the Gators’ seven hits on the night.

Left-hander James Spatafora got the start for the Titans, and the southpaw battled deep into the sixth inning. Spatafora scattered six hits and a walk, surrendering an earned run while picking up five strikeouts.

Everglades cracked the scoreboard in the third to take an early 1-0 edge. Juan Gamero drew a leadoff walk, and then stole second to get into scoring position. Javari Alvin followed with a liner to left field to bring Gamero around to the plate.

The Titans kept the damage minimal by turning a 4-6-3 double play to clear the bases, and Spatafora got a strikeout to end the frame. Nova turned three double plays on the night to keep itself in the contest, and reliever Henry Silva also delivered a big performance out of the bullpen. Silva faced four batters and retired them all, three via strikeout.

The big guy on the mound on the night was Quesada. The right-hander was making his first start of the season after a minor injury heading into the season. Even with a strict pitch limit, he was still able to throw into the fifth by retiring the first 12 batters he faced in order. He found the strike zone on 35 of his 52 total pitches, paving the way for five strikeouts.

Austin Davis forced Everglades into their bullpen when he led off the bottom of the fifth by rolling a single up the middle. Curiel took over on the mound and quickly got two outs, including an unusual sequence in which Davis was erased on the bases following a dropped pop up that put Javier Lopez on first base. Matthew Patella came in to run for Lopez, and he raced around to score and even things up thanks to a shot to left field off the bat of Jose Oliva.

Even after surrendering the lead, the Gators did not relent. Quesada led off the next frame with his big hit, and Everglades quickly went back on top. It was a great night for Quesada, but most of all that was simply because he was back on the bump where he belongs. 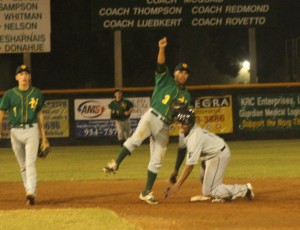 The Titans turned three double plays on the night, including this 6-4-3 double play to end the fifth inning.

“I felt great; I felt perfect. There was nothing wrong with my arm and I am really looking forward to the rest of the season pitching,” Quesada said. “Erik Curiel came up right behind me to relieve and he did his job. He threw his strikes and we executed and we got them out. They didn’t score any runs on him. Then we had our closer Dominic come in for that last inning and he did his job as well. I trust those guys with all my heart, and my whole team.”

Curiel picked up the win after tossing two solid frames, giving up two walks while picking up a strikeout. The Gators showed what sort of pitching they have this season, and the bullpen followed in tow to the tune first set by Quesada.

“You have to give their kid credit; he pitched on a pitch-count and he had a no-hitter through four. He did a great job,” McQuaid said. “Defensively their shortstop made two or three nice plays, and the third baseman made some plays. They deserved to beat us. They played and they didn’t break, where they had in the past to maybe give away a ball game. They didn’t do that, and you have to give Coach Cordova credit. They were playing.”

Both clubs are set to dive into some big district games going forward, as each squad next plays four straight district opponents. Battles like the one on Wednesday only serve to make them better prepared for those games, where the stakes become even higher.