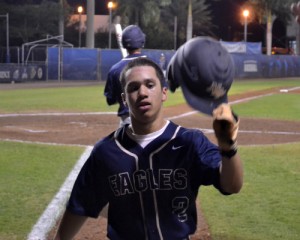 In a nail-biting District 4A-14 affair, the North Broward Prep Eagles got key offensive contributions en route to eeking out a hard-fought, 4-2 victory on Thursday night at Ian Besner Field on the Nova Southeastern University campus. Jared Schwait and Nick Bohrer supplied the offense, while the Eagles also got a stellar, six-inning start by Brian Fagan.

With one out in the first inning, Fagan surrendered two earned runs. After that, the senior, using low-80’s heat and a filthy 12-6 out-pitch curveball, hung zeros all the way through the sixth inning. Playing at the cavernous Ian Besner Field instead of his much smaller home field which favors hitters, Fagan, usually a strikeout pitcher, admits his approach was a little bit different on the night.

“Playing at a big yard like this is a lot different than playing at home. I had to change my mindset on the mound,” Fagan said. “Instead of trying to strike everyone out, I kind of had to try to pitch to contact more. I got a lot of fly ball outs. Some of those would have normally gone over the fence at our park. So it was good that I was able to adjust to my surroundings.”

Around the plate all night long, 54 of Fagan’s 85 pitches went for strikes. According to his Manager, Brian Campbell, the outing went exactly according to plan.

“We expect big things out of Brian Fagan. He’s one of our horses,” Campbell said. “He settled down against a really good hitting team. We knew that University was going to come out swinging the bats well. We wanted to use the field to force contact and make some plays. All-in-all he made that happen.”

It was a complete effort by Fagan on both sides of the ball. On top of his outstanding start on the mound, he helped his own cause by driving in three of the Eagles’ four runs. Fagan started contributing offensively before his night on the hill even got started. After three of his teammates reached base in a row to begin the game, Fagan drove in two runs by smashing a two-RBI single that plated Jared Schwait and Nick Bohrer.

After making equally as good contact in his next at bat, a drive that would have left many other ballparks, Fagan put the Eagles up by two with a fifth-inning RBI base knock that scored Anthony Masiello. Fagan attributed his success at the plate on the night to the fact that he was the game’s starting pitcher. According to Fagan, pitching makes him a better hitter.

“When I’m hitting and pitching I just kind of try to ease in a little bit,” Fagan said. “I don’t mentally think about hitting as much; I’m more focused on pitching. It helps me relax at the plate and helps me hit a little better.” 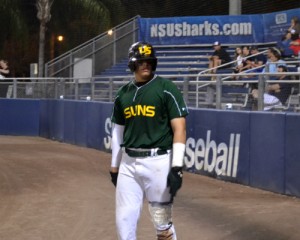 Evan Klugerman reached base twice, drove a run in, and stole a bag for the Suns

Fagan wasn’t the Eagles’ only offensive star on the night. In a game in which runs would prove to come at a premium, lead-off hitter and catalyst Jared Schwait was on base twice and scored both times, the latter of which would prove to be the game’s winning tally. In his second at bat Schwait exhibited impressive power for his small frame, driving a hard-hit ball into the left-center field gap for a double, a hit which started a two out rally. A batter later, Schwait came in to score on a Nick Bohrer double, one of Bohrer’s three hits on the night.

Against a high-powered offense, Fagan did put some runners on, but he bore down when he had to, pitching his way out of jams on two separate occasions. In the third, Fagan put the tying run on via a single to Sam Guillorme, then allowed him to move into scoring position on a wild pitch. However, Fagan came back to get a pair of strikeouts to escape the frame unscathed.

Fagan’s most impressive high-wire act of the night came in the fifth inning. After surrendering a lead-off single to Michael Glantz and then hitting Buddy Hayward with a pitch, the Suns had three chances with the go-ahead run at the plate. However, Fagan induced two infield pop outs and a ground out to end the threat.

The Eagles were given a scare by a hard-charging University team in the final frame. The Suns put two runners on in their first two at-bats when Jake Kubilian reached on an error and Glantz followed with a single. The Suns once again had two opportunities with the winning run at the plate and no outs.

However, Noth Broward got some good mound work by closer Max Tannenbaum, as well as some solid defense, to seal the win. The Eagles were able to erase a fielding error by catching a runner leading off too far between second and third. Tannenbaum then hung a K and got the final out on a fly ball to short.

Schwait attributed his team’s ability to bend but not break to their confidence in each other.

“It was a great night. I was proud of the way we were able to pull through and eek out a win,” Schwait said. “Our team is so well-mended together. We know each other’s abilities and come through when we need to. We know we can come through when the big moments call for it.”

After a tough first frame on defense, the Suns were able to come right back and plate two runs of their own in the first inning. It began on a walk to Guillorme, then an Evan McKendry double, an Evan Klugerman RBI single, and a Kyle Oren sac fly, making it a brand new game again. They had their chances to strike later in the game, but were not able to strike. Manager Dan Rovetto attributed the loss to his team not being able to take advantage with two outs and runners in scoring position.

“The two-out hit eluded us tonight,” Rovetto said. “We were 0-and-4 with two outs and runners in scoring position. That’s really the main difference in the baseball game. They executed to get that third run with a two-out double and a two-out single, which gave them the lead for good. That’s good execution on their part. We were not able to match it.”

Going forward, Rovetto said his message to his team will be to remain confident and take every loss as a lesson on what they need to do to keep their season alive as long as possible.

“We have to show up tomorrow morning at 9:30 ready to practice,” Rovetto said. “This district is the toughest district in the state, in my opinion. There’s 12 battles throughout the year. You just have to pick your head up and your chin up and head on to the next battle. We have to get better starting tomorrow to prepare for our next game on Saturday.”