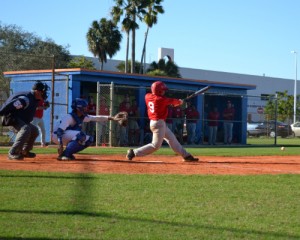 In the baseball universe, kleptomania can be a good thing. The Plantation Colonels proved that on Thursday night as they collected their first district win of 2015 by putting on a base-running clinic. After stealing a whopping 10 bases, Plantation collected an 8-4 victory over the Hollywood Hills Spartans.

It was a victory that mattered to the Colonels, after they lost three times to the rival Spartans last season. More importantly was the fact that it is a district victory. Manager Manny Aguilar hopes his team’s good showing at the plate and on the base paths will ignite his team as they continue their district schedule.

“After coming off a tough loss to St. Thomas Tuesday, this was one of those games we had to jump back and get a win in the district. We made that happen,” Aguilar said. “”Hopefully this starts something and gets our guys going offensively.”

On a cold afternoon, the Colonels were off to the races early and often. After walking to lead off the game, center fielder Tyler Price stole second and third on back-to-back pitches, before being driven in on a sac fly by Juan Pinzon. A batter later, third baseman Chris Montes reached first on a single. He wasn’t on that bag or on the first one he stole for very long, either, as he too swiped second and third in the blink of an eye before crossing the plate on an error.

The Colonials continued lighting up the base paths in the second inning. After reaching via catcher’s interference, left fielder Jeremy Bishop stole second and got to third on a wild pitch, before scoring on an error. Catcher Juan Taveras and Price each drew walks and put themselves in scoring position on steals. Taveras came in to score on an error and Price crossed the plate on an RBI single by first baseman Jonathan Coval.

The approach by Plantation continued all night long, all the way to the final frame. In the seventh inning, Engels Vargas reached on a base hit, stole second, and took third on a wild pitch. Their good situational hitting continued as well, as Coval knocked Vargas in with a sacrifice fly a batter later. In between Vargas and Coval, Montes walked and stole his third bag of the game. With one out, designated hitter Jeremy De La Cruz drove the run in with a base hit. 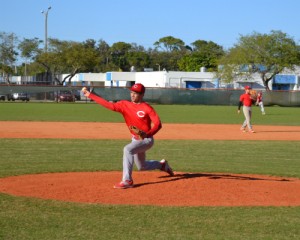 Defensively, the Colonels were just as effective for most of the game. Using low-80’s heat and filthy breaking stuff, starter Connor Jones tallied eight strikeouts to just one walk over his five innings of work. Jones needed to face just seventeen batters to record his fifteen outs, and 62% of his 73 total pitches went for strikes.

“Connor came out throwing strikes,” Aguilar said. “He never got himself in a situation he didn’t want to be in and he had his defense backing him up. Everything was perfect.”

On the rare occasion that Jones allowed a base runner, his defense picked him up and erased it. In the first and second innings, the infield turned two beautiful, textbook double plays: a 6-4-3 and a 5-4-3. Aguilar used the same term to describe his team’s effort as a whole on the day.

Stephan Richards enjoyed a good afternoon for Hollywood Hills. The center fielder was on base three times, twice via singles and once via an error, and he scored a run. In the third inning, Richards also did some stealing of his own on both sides of the ball. On offense, he nabbed a base after reaching on his second base hit. On defense, the sophomore made a spectacular play, charging in on a sinking fly ball and completely laying out to rob the Colonels of a hit.

On the mound for the Spartans, Ariel Hernandez picked up a struggling starter and was able to shut down a high-powered Plantation offense for three innings. Using a good three-pitch repertoire, the senior set down eight out of nine hitters during the middle three innings.

Hernandez suffered an injury earlier this year. Spartans Manager Thomas Marante admits that had he known his hurler was at 100% he would have been on the rubber from the start of the game.

“In hindsight, had I known he was alright, I would have started him,” Marante said. “It wasn’t until he started warming up in the bullpen that I saw he was ready to go. That’s why I threw a different guy out there to start the game. Ariel did a great job, though.” 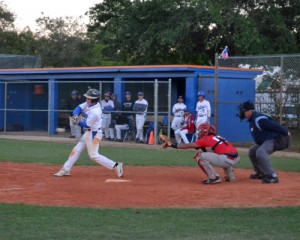 Stephan Richards had a good all-around day for the Spartans

The Spartans were able to mount a late comeback bid against the Colonels’ bullpen in their last licks. Taking what Plantation gave them, they scored two runs on four walks and a hit before the Colonels were able to put the game away.

Aguilar, who remembers the Spartans all too well from last year, was not surprised at all that the Spartans gave them a run for their money to the end.

“Hollywood Hills, man. We always battle against them,” Aguilar said. “It’s turning out to be a good rivalry. They had our number in the playoffs last year, and I didn’t expect anything less from them.”

Although they came up short, Marante was appreciative of his adolescent team’s effort on the day. He is confident that with more like it, the Spartans will be mighty again one day soon.

“It was just too little too late,” Marante said. “This is a young team, though, and we will be back.”