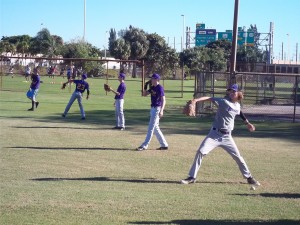 Lefty Dylan Arnett and the rest of the arms will be firing for the Paladins this season.

The strength of the South Plantation baseball team is its senior leadership, an extremely talented pitching staff and a solid defense.

Manager Ryan Manuell smiles when he starts to talk about his Paladins team.

“They are a good group of guys and the thing that I am most proud of is that they are student athletes,” Manuell said. “We have a couple of guys who are in the top 50 of their class. They are senior catcher, Aaron Sigal and second baseman/pitcher, Mike Mele.”

The Paladins had an up and down season in 2014, going 6-11-1 and 3-5 in 8A-12. To bounce back this year that senior leadership will come from Sigal, Mele and first baseman Steven Seager. Sigal led the team in RBIs in 2014 and handles the talented staff that Manager Manuell holds in high esteem. Seager, the starting first baseman, shows good range and when at the plate he will provide the Paladins with some good punch. Mele is the starting second baseman and will be called upon to throw some solid innings as a starting pitcher. At the plate, Mele shows quick hands with the bat and puts the ball in play well.

“Our strengths are pitching and defense, and we have a hitter or two so we will score some runs,” Mele said.

On the mound, the Paladins will feature Andrew Huegele. Huegele compiled an impressive 1.00 earned run average in 2014, and Manuell says his arm strength has improved this year. Mike Mele will be looked upon to provide some solid starts for the club and the club is looking to sophomore Dylan Arnett to come into his own this year.

“Dylan has a live arm and can bring it,” Manuell said about his promising left-handed pitcher.  “He is an athlete and he is extremely competitive.” 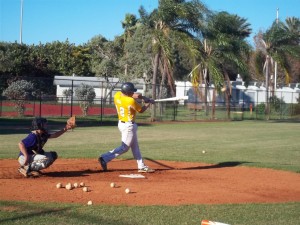 Senior catcher, Aaron Sigal belts one out during batting practice.

The squad has been working the freshman and junior varsity squads in with the varsity practices. Although it is too early to tell he may have some talent arising from the underclassmen. The Paladins did pick up a new face during the fall baseball season. His name is Ernie O’Steen and he is projected to play a lot of center field and also see action on the mound.

Manuell took over as Manager after the fifth game last season, but now the Paladins have a complete assistant coaching staff supporting him too. The staff consists of Miguel Lopez, Alex Corza, Care Holder and Fernando Aponte. Aponte has developed a good rapport early on with the team. Tim Koehler rounds out the staff as Manuell’s right hand man.

Manuell is realistic about his goals.

“We have a very competitive district,” Manuell said. “We will be as competitive as possible in our district and if we get a couple of breaks, we could win it”.

The Paladins start their season with a couple of exhibition games in Deerfield Beach in early February before they start their spring 2015 campaign. The optimism is here, the talent is here, and this group of smart ballplayers have the ability to make things go their way.