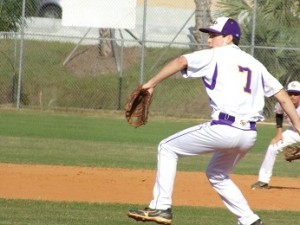 Andrew Huegele was masterful on the mound for the Paladins.

The South Plantation Paladins baseball team hosted the Patriots of Miramar on Tuesday afternoon. Under sunny skies at the Paladins’ home field, South Plantation worked its way to a 9-0 victory.

Despite the lopsided score, this was not an easy victory. In the bottom of the fourth, Paladins Manager Ryan Manuell sensed the tight tone of the game. Feeling runs may be tough to come by, Manuell made some adjustments.

“Their pitcher was throwing a lot of off speed stuff,” Manuell said. “We had to make things happen.”

Manuell and his team employed a good eye at the plate, a couple of well-placed bunts and some heads up baserunning. After a walk, a bunt single and a sacrifice bunt that ended in a throwing error, the Paladins were leading 2-0. With another walk, the bases were loaded for first baseman Steven Seager. As the Paladins co-captain strode to the plate, the Paladins bench grew very loud as the players knew Seager was ready to produce. Seager did so with a towering blast to the base of the left-field wall. All three runners scored and, after legging out a triple, Seager scored on a throwing error.

South Plantation sent twelve men to the plate in the inning and broke open a close game with seven runs to make the score 8-0. From there starter Andrew Huegele took over, finishing the final three innings, pitching to the minimum nine hitters. Huegele finished with seven innings pitched, giving up only four hits with seven strikeouts and no walks.

“Andrew is one of my best friends,” Seager said. “When he is on, we know we are in the game. With our defense behind him, it was a great combination.”

Seager ended up going 2-for-3 with three runs batted in. Second baseman Mike Mele added two RBIs on a solid shot to center in the fourth inning.

“As I said, we had to make things happen, and we did,” Manuell said, “Our patience and bunting set it up for one of our big guys and Steven came through. We have very good pitching and we are solid in the field and we showed that today. When we combine that with some clutch hitting, we are going to be in the game.”

The game started off with sharp pitching and some solid play in the field. Miramar opened the first inning with a lead-off base hit by center fielder Christopher Beech. After a strikeout, Beech stole second base and moved to third on an infield groundout. Beech was stranded at third when Huegele closed the frame with a swinging strikeout.

Marty Silverberg tosses one of his elusive split finger pitches.

In the bottom of the first, the Paladins used some patient at-bats to fill the bases on walks. Patriot starting pitcher Marty Silverberg bore down and got out of the inning with two called third strikes and a fly out to left field.

“Silverberg is my starting catcher, and he is tough,” Miramar Manager Mario Rodriguez. “He is a senior and throws a splitter and when he puts it over, he’ll be tough. If he gets a few more starts, who knows?”

Runs were tough to come by early. In the second inning, Miramar again got the lead batter on. But he was stranded once again by sharp pitching by Huegele and solid fielding by the group behind him. Miramar was again held off the scoreboard in the third as South Plantation made two fine infield plays, sandwiched around a strikeout by Huegele.

Meanwhile South Plantation squeezed out a run in the bottom of the second by tailoring two walks, a bunt single and an RBI groundout into a 1-0 lead. Then Zachary Birchall led off the third inning for the Paladins with a shot to center that fell right in front of a diving Beech. Once again, Silverberg remained composed and set down the next three hitters with no change on the scoreboard.

As the game moved into the fourth inning, the feeling on the field was that this one was going to be close. This feeling brought out a determined Huegele, as he used great control and a tricky curveball to set down the side in order. Huegele recorded two more strikeouts in the inning.