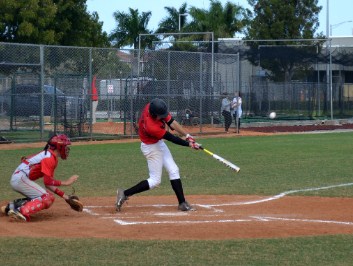 Dominant starting pitching was on full display on Tuesday afternoon at Monarch High. In a game that featured just a combined four runs and five hits, the Knight’s Joey Hennessey out-dueled Northeast’s Isaiah Blackwell en route to a 3-1 district victory. Hennessey tallied a staggering 12 strikeouts to just one walk to keep Monarch (9-1) undefeated in 7A-14 at 4-0.

Hennessey did not flash stuff that is going to light up a radar gun. What he did show was great movement on a filthy out-pitch curveball. Working for him all day long, Hennessey stuck almost exclusively to a fastball and curveball two-pitch repertoire. He also showed a bulldog-like mentality and composure well beyond his years.

With his team up 2-1 in the fourth inning, Hennessey put the lead-off man on via a walk, his only free pass of the day. The runner then stole second, putting the tying run in scoring position with nobody out. Unfazed, Hennessey trusted his stuff, and kept attacking the opposing hitters. He came back to strike out the side, ending the best opportunity the Hurricanes would have at a comeback.

“Joey didn’t really have his best stuff today, but he battled through it,” Franco said. “That’s the sign of a good pitcher. Anytime you can beat a quality opponent when you don’t have your best stuff and strike out 12 guys and only walk one, he obviously proved he can pitch. He’s not a thrower; he’s a pitcher. He did a great job today for us.”

Hennessey struck out at least one batter in every inning. Of the twenty-six hitters he faced on the day, he threw first pitch strikes to 20 of them.

“I was just trying to throw strikes, just get the ball over the plate and get my slider working,” Hennessey said. “It was a good day.”

On a day in which runs came at a premium, the Knights had to get creative with how they plated their three runs. Cleanup hitter Nick Taylor was a key contributor, but in ways in which he is probably unaccustomed to. Rather than using his usual strength and power, Taylor was called upon to hit situationally. He did so effectively, coming through with two successful sacrifices, one a sacrifice fly RBI in the first inning, and the other a gorgeous sacrifice bunt that helped lead to an important insurance run in the seventh.

“We told our kids from day one of fall, one to nine you’ve got to be able to lay bunts down and you’ve got to be able to have productive at-bats,” Franco said. “It doesn’t matter who it is; anybody at that moment needs to step up and get it done. Not many teams are going to bunt with their four hitter, but we needed a runner at third base with less than two outs. It wound up working out perfect.” 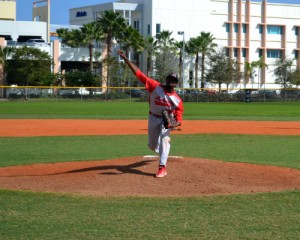 On the mound for the Hurricanes, Isaiah Blackwell stuck right with Hennessey for the entire game. Not relying on the strikeout, but rather on pitching affectively to contact, Blackwell limited an offense that came into the game having scored at least 10 runs in four of their last six games.

After getting through the second inning on just six pitches, Blackwell showed an aggressive mentality of his own. Despite getting behind in the count 3-0 to the first hitter of the third inning, he came back to induce a ground out. Then, after he had runners on base, he forced another groundout, followed by a strikeout, to end the threat. Blackwell had three 1-2-3 innings on the day and threw first pitch strikes to 17 of his 26 hitters faced.

“I’m so pleased and excited with the way Isaiah battled today,” Northeast Manager Dave Hollingsworth said. “Monarch is a really good team in a good baseball area. To keep us in a one-run game through six to seven innings is outstanding.”

Blackwell attributed his strong start to recent adjustments he has made in practice.

“The day before today I was working on my delivery with Coach Hollingsworth,” Blackwell said. “We were working on shortening up my arm action and driving from the mound to home plate. It paid off today. I really thought I threw the ball well. I could have been better in some spots, but I feel I did really good overall.”

Blackwell’s good afternoon continued at the plate. In the second inning, after Matthew Underhill walked, stole second and moved to third on an error, Blackwell knocked in his team’s only run with a perfectly-placed ball behind second base.

Hollingsworth attributed the loss to the team as a whole not having the bulldog-like mentality the Knights’ Hennessey and his own Blackwell showed on the day. However, the skipper seemed confident that by the end of the season, his team will acquire it.

“We have to develop a mentality here that we are going to get the runs when they give it to us. We had a spot with one out and runner on third and they’re playing back saying, ‘take it’. We didn’t get the job done,” Hollingsworth said. “To win these games against a good district opponent like Monarch, if we want to win this district in April, we have to develop a tougher mentality and mindset in those spots. We have gotten better from when we started in September, but we still haven’t developed a killer instinct. But we have until April to fix it.”

The road to improving starts immediately for Hollingsworth and the Hurricanes (4-4, 2-2). According to Hollingsworth, it is a road he is glad to meet head on.

“We’re going to go right back to work tomorrow,” Hollingsworth said. “I love these practices after a tough loss. They are always intense. We just have to work and fix things, and we are going to fix them. We are going to be a much different team before April.”